Pairing Is Caring Beer, Wine and Food Fest on July 9 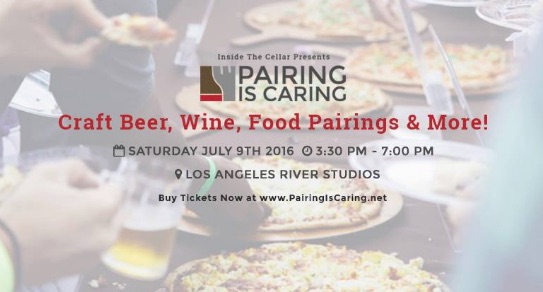 Let your taste buds do all the work at this food and beer pairing event at LA River Studios where guests are encouraged to pair appetizers created by local chef  Marcus Roberto of Personal Pizza with their drinks.

Tickets are $65 for general admission which includes unlimited pours of craft beer, unlimited wine pours, unlimited cider pours, AYCE food pairings, and a souvenir tasting glass and $100 for VIP which includes early admittance at 3 p.m., two complimentary raffle tickets and access to the VIP section which will feature a rare beer “bottle share” – with personal collections being brought from the Inside The Cellar Team. Bottle Share begins at 5 p.m. VIP’s are encouraged to bring bottles if they’d like but it’s not required.

Designated driver tickets are available for $25  which include unlimited water, soda, food pairing & access to the Pet Play Area. Designated Drivers will NOT be allowed to consume alcohol. Anyone caught doing such will be immediately removed from the event.

Proceeds from Pairing Is Caring will benefit the Society for the Prevention of Cruelty to Animals.

The following breweries, cider mills, and wineries are scheduled to be at the event:

Anchorage Deal with the Devil Batch 2 2014

Find more information the link below.