This is a very simple post. This is a post that lists out all of the secret menu items in the world (that we could find) for In N Out Burger restaurants.

I would call this list the “most complete” simply because I know there has to be more out there than just the below items (even though I’ve scoured the internets far and wide), which why I consider this post a living document.

Of course you have my wholehearted promise to continue to pester cashiers, write emails, and solicit reader comments and feedback to make this the best damn In N Out secret menu list on the planet.

Until then, enjoy the deliciousness.

[EDITOR’S NOTE: Thanks to everyone who has commented below to add to the list and made additional suggestions. Latest Update: 2/10/15] 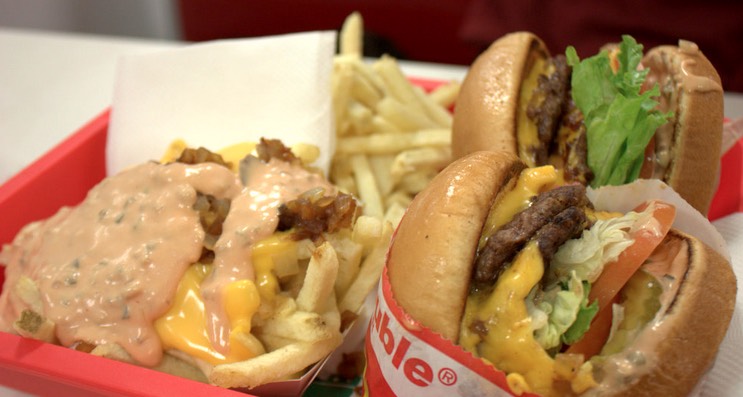 In N Out Secret Burgers

2 by 4: a double double with two extra slices of cheese. Not for the weak hearted.

3 by Meat: three beef patties and no cheese.

3×3 or 4×4: Specifies the number of beef patties and cheese slices on your burger. My understanding they will no longer do bigger than 4×4.

Cut in half: Exactly what is sounds like. They’ll cut the burger in half before wrapping it up. Great if you’ve got kids and need smaller portions.

Extra salt: Upon request they will add an extra salt pinch on top of the tomato layer of your burger.

Extra Toast: They will leave your bun on the grill making it extra crispy

Flying Dutchman: For the ultimate meat eater. No bun, no veggies, just two beef patties and two slices of cheese.

Grilled Cheese: A bun, tomatoes and onions, if you want them, grilled with melted cheese.

Medium rare: Upon request they will cook your patty a little less than usual that should provide a juicy pink center.

Mustard grilled patty: They will spread your patty with mustard before grilling it.

No Salt: Patties are normally heavily salted, so you can have them skip it if you request.

No toast: If you don’t want your bun toasted.

Onions: Can be ordered as whole fresh, fresh chopped, whole grilled, grilled chopped, or any combination of the four. It’s even possible to get multiples types of onions on the same burger (so you could order whole AND grilled for example.

Protein style: Protein style removes the bun and wraps your burger in lettuce like a burrito.

Veggie Burger: Instead of a beef patty, they substitute extra tomatoes (also known as a Wish Burger. As in I wish I had some meat).

Well done: If you want more of the charred burger flavor.

NOTE: We investigated the rumored “Monkey Style Burger” which contains animal style fries actually put into the burger and found that this does not appear to part of the In n Out Secret Menu. If you have evidence in the contrary, please let us know in the comments below.

In N Out Secret Fries

Light: French fries taken out of the fryer a little early. Not quite raw, but definitely not crispy.

Well-Done: They will  leave your fries on the fryer extra long, making them a little more oily and crispy.

In N Out Secret Drinks

Choco-vanilla swirl: A chocolate milkshake swirled in with a vanilla milkshake (may also be called the Blank and White)

Lemon-up: Lemonade and seven up mixed together.

Large and extra large shakes: Just a bigger order of milkshake. Comes in either a medium or large cup, respectively.

Neapolitan shake: All the milkshake flavors swirled together, vanilla, chocolate, and strawberry.

Tea-ade: This is just an Arnold Palmer. Half iced tea and half lemonade.

Cold Cheese: An unmelted, straight out of refrigerator slice of cheese.

Pickles – Pickles do not come on the burger but can be added upon request.

If you have any additions to the list or would like to make a recommendation on any of the above items, please let us know in the comments below!