According to the new law L.A. drivers who engage in the dangerous practices of tailgating, excessive speeding, needlessly switching lanes, rampant stop-and-go driving, trying to cut people off when they’re merging on to the freeway, fiddling with their radio and not paying attention to the road, and other related douchebaggy driving behavior will be subject to an immediate revocation of their California driver’s license for up to two years and also be forced to pay a “really, really, really big fine.”

“This is a proud day for Los Angeles,” Garcetti said in a statement released by his office. “Once and for all we, as a city, are taking a collective stand against our shitty drivers. No more, we say.” 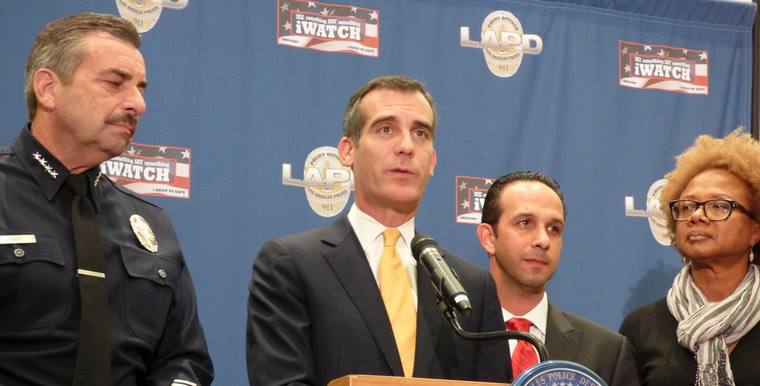 While it’s unclear if the mayor actually has to authority to to issue such an order, it’s being seen by many as a brilliant public relations move to galvanize the electorate behind a common goal.

Media consultant Winne Voyce of Ketchum & Mushard told We Like L.A. that you can debate the legality of it, but not the PR value.

“It’s a win-win for the mayor,” Voyce said. “On the one hand, if the order stands, great, less shitty drivers on the road. But if the order is struck down, Garcetti has still made his stance clear on the issue. You can’t put a figure on the political capital he gains here.”

As part of the sweeping reform the Mayor’s office has also created a social media account on Instagram called @LAsWorstDrivers that angelenos can use to tag pictures and videos they capture of fellow residents engaging in shitty driving behavior. There’s even an official hashtag: #NoMoreShit

Some citizens, however, are concerned that encouraging people to take photos of other drivers while they themselves are driving may be a recipe for disaster.

“I mean, I’m all for less shitty drivers cutting me off and stuff,” said Tuffs Hoffman, a yoga instructor who commutes daily from Santa Monica to West Hollywood. “But doesn’t this undermine the whole idea of the law by advocating for people to take photos with their phones while driving?”

In response to the criticism, Garcetti was firm in his outlook, “Look, we all know people don’t obey the no-texting laws as it is, so we figure, hey, why not use the practice for something good, like shaming other drivers into being safer?”

The law is supposed to take effect immediately, though when we contacted the CHP to determine how it will be enforced, they simply texted back with the following emoji:

Also in a related story…