JPL’s Next FREE Open House Event is Coming Up in June (and tickets are now required!)

When NASA’s Jet Propulsion Laboratory opens up the doors to the public for their annual open house it routinely becomes one of the most coveted events to attend in the entire city.

After all, who wouldn’t want to take a insiders’ peak into the inner workings of some of the most important work being done in the fields of space and technology?

While past open houses have taken place in October, this year they’re moving up the date.

JPL’s next open house event is now scheduled for the weekend of June 4-5, but with a new wrinkle this year: You’re going to need a ticket.

The move to ticket the event comes after an overwhelming turnout of an estimated 45,000 people (many of whom had to be turned away) showed up for last October’s event.

A Ticket to Explore JPL, as it’s now being called (emphasis on ticket!), will offer much the same experience as past open house events, only they’ve preset the number of attendees and you’ll have to reserve your ticket online in advance in order to get in. 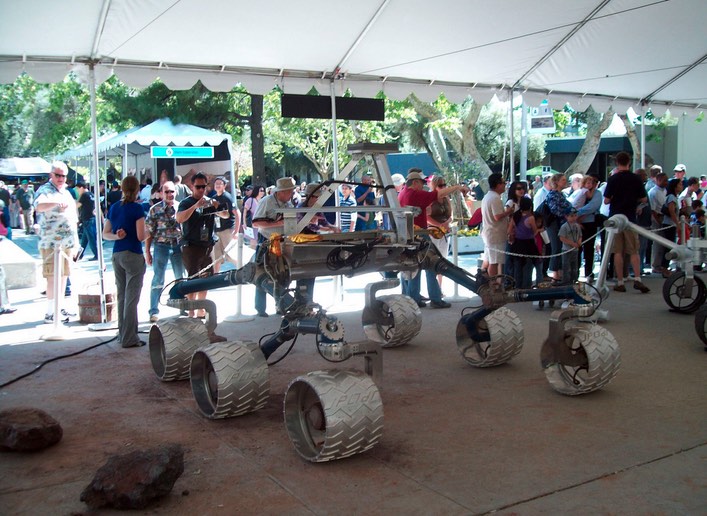 From JPL’s Open House in 2009. Credit: Brian Karczewski via flickr

Reservations can be made on a special events page on the JPL website, starting April 25 at 9:00 am PDT.

Tickets are free, but it’s first-come, first-serve so you’ll want to stay on top of it if you want to get in.

Families hoping to attend the event together can scoop up five tickets total max, and no transferring or selling of tickets will be allowed. You’ll need your ID plus the ticket to check in on the day of the event.

Get more info via the embed below: