This week includes dineL.A. happy hours, Artopia in the Arts District, The LA Comedy Festival, Fleece Night at Dodger Stadium, First Fridays, and a Pancake & Booze Art Show! Surely you can find something in that mix to inspire you to get out and explore. 😉 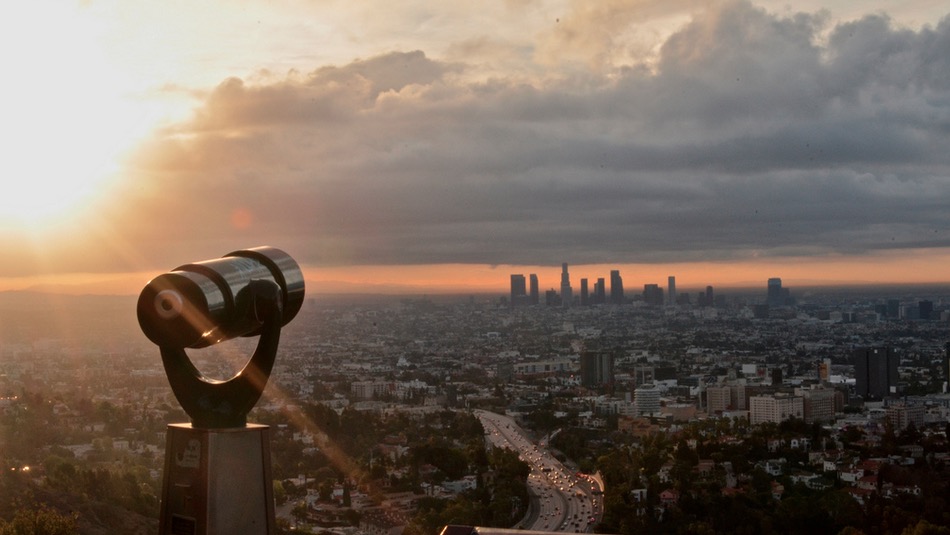 A view from the Hollywood Bowl Overlook. Credit: Gaston Hinostroza via flickr

This five day dining extravaganza runs through Friday and takes place at over 130 restaurants and bars in the L.A. County. Check out the complete list of participating restaurants, along with links to their special menus for the week.

The 17th Annual L.A. Comedy Festival returns for a side splitting fun filled comedy week. Fans can look forward to everything from rom-coms to musical farces to documentaries. The festival will include screenings of international features starring Jason Alexander, Howie Mandel, Neve Campbell and others. More than 60 shorts have been entered in the screenplay competition. To keep the laughs going the festival will also provide live stand-up by Jeff Young, Mookie Thompson, Caroline Feraday, Nathan Brannon and Rajan Dharni.

LACMA debuted the highly anticipated exhibit 50 for 50: Gifts on the Occasion of LACMA’s Anniversary on Sunday, if you missed it you still have a chance to view the exhibit till September 30th. The exhibition will display 50 out of LACMA’s over 120,000 incredible gifts from generous donors throughout the years. A selection of highlights from the recent, history making contribution of A. Jerrold Perenchio who donated 47 pieces of art work to LACMA including works from Degas, Monet and Picasso will also be revealed in this exhibition along with donations of Warhols, art from Africa and decorative arts.

4. The Secret Show At The Blind Barber

On every last Monday of the month there’s a free comedy show held inside a Culver City speakeasy that resides on the other side of a working barbershop. It’s called the Blind Barber Secret Show and you need to be on a guest list to get in, but fortunately it’s as simple as emailing the organizers via email (check link for more info).

The Monday blues got you down? Have some sake on Katsuya! Increase your sake knowledge with a complementary tasting before dinner is served at all Katsuya locations. Local experts from Tyku, Rock Sake, Dassai and Kikisui will be hosting.

A steam punk powered variety show combining elements of sci-fi-, fantasy, and techno dance with a sultry cabaret (yup, this sounds different). Get more information and discount tickets via Goldstar.

7. Screening Of The Cult Classic Ghostbusters

Latin-inspired restaurant Bow & Truss presents a new series of throwback movie nights! The new event series will open with a screening of Ghostbuster on their patio. Admission is $15 for a reserved spot and comes with a movie-themed snack!

Free family nights at the Kidspace Children’s Museum happen’s every first Tuesday of the month from 4pm. to 8pm. The Pasadena museum is hosting a night of Irish Culture and dance. Guest will explore the history of St. Patricks Day, make stain glass shamrock, enjoy irish folk tails and more. For more information check out their events page.

9. Rock & Roll Billboards Of The Sunset Strip At The Skirball

10. Provocations: The Architecture and Design of Heatherwick Studio

Catch the Dodgers against their most hated rival and pick up a cool fleece blanket to take to night games all summer long. Discount tickets still available for the game via our friends at Goldstar.

Enjoy an evening of networking and beautifying with the folks at Love Made and Axis Show. Get complimentary hair and make up touchups, nail polish changes, sweet treats and beverages along with a skincare station, contouring and braid bar and much more. And it’s all free! RSVP is mandatory for this event.

The documentary about fashion legend Iris Apfel a New York fashion inspiration who has dominated the fashion scene for decades, will be screened at the USC School of Cinematic Arts Complex before it comes out in theaters. The screening will be followed by a Q&A with the 93-year-old Iris herself! This marks the final film from documentarian and Grey Gardens director Albert Maysles. RSVP for free admission.

The Grammy Museum presents Ravi Shankar: A Life In Music. The exhibit will mark the first in the United States to celebrate India’s most esteemed musician. On display through spring 2016, the exhibit will feature a collection of sitars played by the muscian, Shankar’s Album Of The Year GRAMMY Award for The Concert For Bangladesh, rare photographs from the Shankar family collection, performance attire, including outfits worn by Shankar at Woodstock in 1969 and The Concert for Bangladesh and more.

Daybreaker returns to Downtown LA and this time it will be at Downtowns Unique Space! Start your morning right with awesome people, coffee, juice, and a DANCE PARTY, music provided by DJ duo Kaleido.

Join Whole Foods Venice Beach Healthy Eating Specialist Christina Lawson as she teaches a FREE one hour class on how to make two types of cheese: a delicious ricotta cheese and a vegan cashew cheese. Space is limited, reserve today!

Get your Instagram game on! Silver Lake’s deserted Sunset Pacific Motel (a.k.a. Bates Motel) has been soaked in limewash for French artist Vincent Lamouroux latest art installation. The building located at 4301 Sunset Blvd and it’s adjacent billboard and nearby palm trees have also been painted stark white. Projection will remain on view until May 10.

YouTube sensation Connor Franta will be hosting a book signing for his debut memoir, A Work in Progress. The book focuses on Connor’s journey from small-town boy to Internet sensation. Fans will have the chance to meet with Connor and get a signed copy of his book at Barnes & Noble at The Grove starting at 9am.

Listen to bands play, join in on tours and discussions and nerd out after hours at the Natural History Museum! First Fridays at NHM is always a fun night!

24. The Pancake and Booze Art Show

The Pancake and Booze Art Show showcases 125 emerging artists in a Warhol-style, anything-goes, massive warehouse environment. There will be all-you-can-eat pancakes, live music, body painting and multimedia displays throughout the warehouse. The show originated in 2009 in Los Angeles and since has popped up more than 100 times in over twenty five cities around North America. Tickets are just $5 and held on Friday and Saturday in the Arts District in Downtown Los Angeles.

26. Free Shark Lagoon Nights At The Aquarium of the Pacific

The Aquarium of the Pacific invites you to get up close with the ocean’s ultimate predators for FREE during Shark Lagoon Nights. There are opportunities to touch bamboo sharks and see large sharks as well as rays in the lagoon.

On the first Friday of the month head down to Abbott Kiney Blvd. in Venice Beach for tons of food trucks, open galleries and late-night shop hours. Get more information via the official event blog.

28. For the Record: Dear John Hughes

An art walk, dining and shopping experience where participating businesses in the Long Beach neighborhood of Bixby Knolls businesses unite to promote local artists and musicians through extended operating hours. Fun for all-ages… and free! Regularly scheduled at 630pm-930pm on Fridays.