10 Reasons Driving in L.A. Doesn’t Suck Half as Much as You Thought it Did

Our local driving experience has a bad reputation. But I believe that if you try hard enough, anything is possible. Seriously, anything – even a less sucky L.A. drive.

Let’s start by considering the following:

In other cities, people chat about freeway traffic lightly – as an icebreaker, a tiny little nothing to start a conversation. Not L.A. Here we have deep, soul-baring revelations about the time we naively hopped on the 110 toward Glendale at 5pm, or what type of person would obstinately hover in our blind spots.

L.A. residents have strong feelings – nay, passions – about driving this city. As well we should. It’s a daily practice of laying our hopes and fears on the table, screwing our courage to the sticking place, and putting our resolves to the test. To say nothing of the adventure surrounding what to do with your vehicle when you at last reach your destination. But can we, collectively, perhaps make these adventures feel more like celebrations and less like pyrrhic victories?

Sure we can, and  it starts with politely reframing our perspective. Or maybe just poking a little fun at the experience as a whole. 😉

So let’s review 10 reasons why dealing with the traffic nightmare of Los Angeles doesn’t have to suck nearly as much as you thought it did. 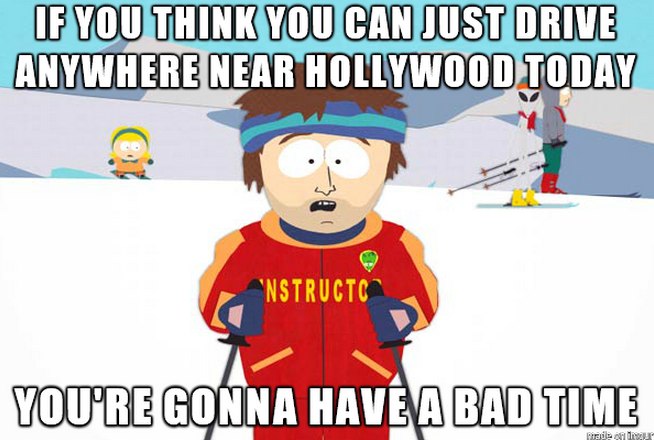 L.A. is full of busy people. Previously one might have considered sitting a traffic to be a waste of precious time. But on the other hand, sitting in traffic leaves us lots of opportunity for people-watching, radio surfing, podcast absorbing, and practicing our beatbox abilities. All the leisure activities one wishes one had more time for.

2. The Power of Left

It’s a belabored point that L.A. is severely lacking in protected left turn lanes. But goodie for us when we do finally catch an opening between the mad rush of oncoming vehicles and oblivious foot traffic. The euphoria, the squeal-inducing elation of safely executing a left turn during typical daytime driving hours.

Anyone who has inadvertently scared the pants off a pedestrian or made their passenger’s life flash before their eyes understands The Power of Left.

L.A. is one of the few cities incorporating drivers from around the world, a range of cultures and etiquette, with a strong sample of every legal driving age there is.

On any random tuesday morning you never know who might be tailgating you, whether it’s a banker from Bangladesh, a wanna-be actor freshly arrived from the midwest, or just some rich chick from the valley. Truly an epic display of diversity, and lucky-us for getting to experience it everyday! 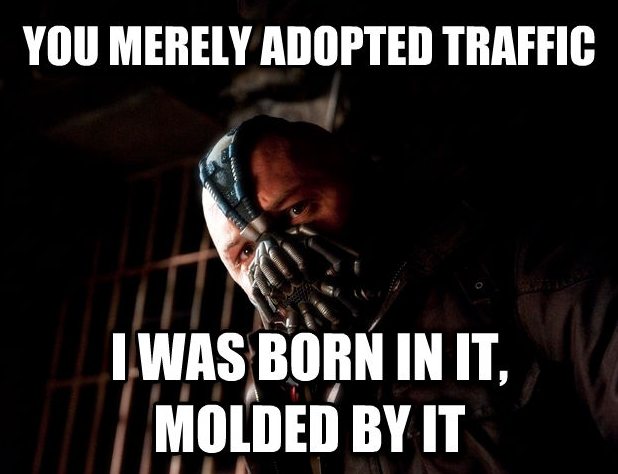 4. The Relief of Empty Bike Lanes

An empty bike lane means there are no bicycles riding beside stop-and-go traffic, which means we are not forced to constantly pass them and be passed by them. Or to wonder what in heck to do with them… Are we accidentally putting their lives in peril?

Better to have no bikes at all. This freedom and range of motion is less sucky then having a slow-moving two-wheeler on your right and wondering how much space is enough space whilst avoiding oncoming traffic.

A brief aside: one Wednesday night I was trying to avoid the 10 Westbound and the GPS took me through Beverly Hills on Wilshire, where I found possibly the slowest moving traffic of all time. Screaming. I was screaming in my heart. And oh, what’s that? It’s a tall bike. Riding down the lane lines between stopped cars. We both lived to tell about it, that’s all I can say.

L.A. drivers pay attention to turn signals. According to some random anecdotal research, roughly 9 out of 10 instances of a turn signal will get you a few feet of space to change lanes when you need it. Of course, this practice is greatly enhanced when we speed up and move over like we don’t care if there is space for us.

And like every other basic American freedom, we reserve the right to use the turn signal or not. Many times not.

It’s either right behind you or right in front of you. Seriously, did no one foresee the difficulty with this?

Thank goodness we have such a razor straight grid of asphalt leading directly into the sun most evenings of the year, which allows us to double up on cool. Shades, check. Visor, check. Seat tilted back to allow as little of the sun’s rays to peek around the edge of said visor, check check check. We still can’t see anything, but we look totally cool.

Carpool lanes make us feel really smart when we do finally have a second person in the car. Usually because we are so used to driving solo that we forgot the carpool lanes even exist, leading to a last-minute Eureka as the flow of traffic comes unceremoniously to a halt.

Carpooling can be fun in other ways too – like having a friend to talk or listen to music with, as well as back us up when another driver is behaving badly and we need to let off steam. 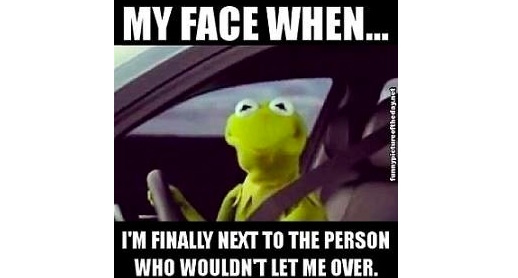 Why spend big money at Disney when we can ride the canyon roads for free? And then there are those choice areas of Hollywood, Studio City and Silver Lake that can usher you out of the bland downtown flats and right into a loop-de-loop.

Nothing says “Wheee!” like the straight, straight, curvy-twisty-turny-hello-blue-sky ride.

Other people use left lanes to pass slower moving traffic. We use them for that too.

They also come in handy when Valet Parking lines have totally taken over the right lane and we just think we’re stopped at a light. A handy tip when driving surface roads on any given night: keep left.

You’ll be happier. And that makes the road a nicer place for everyone who likes driving in L.A.

One of my favorite things about driving in L.A. is hitting that sweet spot between the peak traffic hours of  7-10am/3-7pm weekday rush when the roads are clear for a few hours. Well, except for the lunch rush from like 11am-2pm. Or the beach rush on the weekends.

And then there are the lane closures for road work at night. But hey, 2am on Christmas Day you can fly down the 101 with no problem. Assuming it’s not raining.

Traffic is What you Make of It

Like anything in life, the traffic perils of our city become exactly what you make of them.

My advice is to kick back, blast your rock ‘n roll music, and thank the good Lord that you get to live – and drive – in the city of angels.

Even if you have to recite this affirmation with tongue firmly planted in cheek.

What’s your worst ‘driving in L.A.’ experience? Let us know in the comments below!