When you think of hip-hop culture there are probably any number of words that pop into your mind: creativity, language, expression, beats, rhythm.

But Music Center? Disney Concert Hall? Probably not the venues you associate with hip-hop… until now, perhaps.

This June The Music Center aims to put hip-hop on full blast through a special series showcasing the art of hip-hop dance through live performances, international dance competitions, discussions, demonstrations, and one heck of a late-night dance party.

4 Days of Hip-Hop Dance will take place between June 16-19, centered around an upcoming engagement of Compagnie Käfig presented by Glorya Kaufman Presents Dance at The Music Center.

The hip-hop takeover of The Music Center and Grand Park will include:

This unique four-day series comes as the result of close collaboration between The Music Center and numerous influencers within the hip-hop community including academics, artists, dancers and curators.

Music Center President and CEO Rachel Moore sees this as an opportunity to engage the Los Angeles community about the important impact of hip-hop culture, as well highlight the relevance and complexity of hip-hop dance as a form of artistic expression.

“Hip-Hop dance has evolved dramatically over the years from its early roots of funk style dances to the b-boys and b-girls and dance crews of today,” Moore said via a press release. “Our four-day exploration will highlight how and why Hip-Hop dance has played an important role, socially, culturally and politically,” she explained. “Dance fans will witness a range of performance types, including freestyle improvisations and dance competitions along with the work of French choreographer Mourad Merzouki with his Compagnie Käfig, who has expanded the language and theatricalized Hip-Hop dance for audiences around the world.” 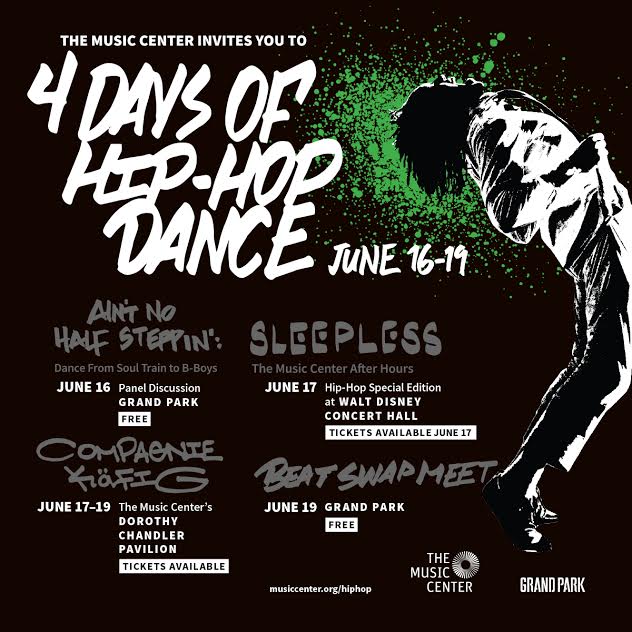 As part of the celebration The Music Center has also commissioned artist Man One to create a special work that will be translated to the steps leading to The Music Center Plaza on Grand Avenue.

Tickets for the hip-hop special edition of Sleepless are $30 with pre-sale tickets available for purchase online on the day of the event.

For more information on the events and to purchase tickets you can visit musiccenter.org.