That’s the minimum amount of rain necessary to make a prodigious poppy bloom possible at the Antelope Valley California Poppy Reserve in Lancaster, CA. We’re already over the mark as enter month two of 2017, but let’s not get too far ahead of ourselves.

“We need the rains to continue on a regular basis to maintain the bloom,” California State Park Interpreter Jean Rhyne tells the San Francisco Chronicle. “That’s really what they need. With the past years of drought, there isn’t a lot of moisture built up in the soil. If we’d had several years of good rain and enough moisture content in the soil, the plants would be growing early enough to carry them through a freeze or heat wave. The roots needs to be deep enough for them to tolerate extreme conditions.” 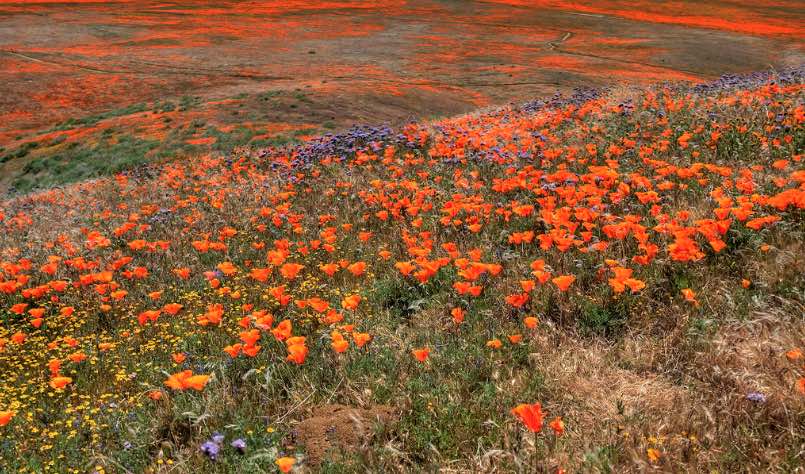 Despite the caution, the early signs are good.

“As of February 6th, the recent rains have started to green up the hills with tiny wildflower sprouts, but it is too early to determine if and when we will have a good bloom this year. We are currently seeing a lot of grasses and filaree sprouts and not very many poppies, but new sprouts are coming up every day so check back weekly for updates.  If all goes well, we can expect the bloom to start in early to mid-March and last until mid-April or later.”

Because of the fickle nature of the poppy blooms it’s advised not to cement travel plans too far in advance. A sudden freeze or a heatwave or even just a dry spell that lasts more than 20 days could kill the bloom before it really takes off. Honestly, it’ll be hard to know until a few days out from your visit just how the flowers will look (and even then a significant weather event could make things go sideways).
One thing is certain, though. If the conditions pan out, it promises to be one of the most beautiful natural displays one can find in all of California.
Assuming all goes well the peak bloom would start around the end of February and peak by mid-March.
Fingers crossed!
Advertisements