8 Spots for the Best Dim Sum in Los Angeles

The San Gabriel Valley is home to some of the tastiest, most authentic Chinese food in the United States, so it’s no wonder that the best dim sum spots in Los Angeles are all located within the famed 626 area code. For those new to the art of dim sum, you’ll want to know that there are two ordering systems.

Traditionally, dim sum dishes are offered by ladies pushing carts of food and are priced according to small, medium, large, or special. The cart ladies put a stamp on your tab corresponding to that dishes’ price.

Newer, more modern dim sum restaurants offer made-to-order dishes that you request by marking your choices on a piece of paper. These modern eateries are more expensive than traditional restaurants.

Keep in mind that dim sum prices are slightly lower on weekdays than on weekends and holidays. Now that you’ve had a quick intro, here’s where to find the best dim sum in Los Angeles.

[RELATED: 7 Spots for the Best Ramen in Los Angeles]

Sea Harbour’s food is delicious, but can you stomach the wait? Weekday or weekend, there’s no avoiding waiting for a table at Sea Harbour. From the outside, the restaurant looks run-down, but that doesn’t stop the lines from circling around this Rosemead eatery. There are no pushcarts at Sea Harbor, and no dishes are steamed until you order them. Their dumpling skins are thin and translucent, just like in Hong Kong’s high-quality dim sum restaurants. Sea Harbour offers all the traditional favorites, as well as some creative fusion items like shrimp and roe dumplings, egg tofu in abalone sauce, green spinach pork buns, and deep fried fish paste with chives, to name a few. The food is scrumptious, but it’s on the pricier end of the spectrum for dim sum in the area.

King Hua’s dim sum is also on the higher end of the price spectrum, as are Lunasia and Elite. King Hua has a wide variety of dim sum and lots of different dumplings and buns to try, but they’re no competition for Sea Harbour. There’s no pushcart service here, but staff do walk around with a few fresh-out-of-the-oven dishes on trays. King Hua offers their own take on some traditional dim sum items, such as their Egg Custard Tart with Bird’s Nest, with custard that’s lighter and less sweet than traditional egg custard tarts. Another standout is the Glutinous Rice Ball filled with salty egg yolk cream. 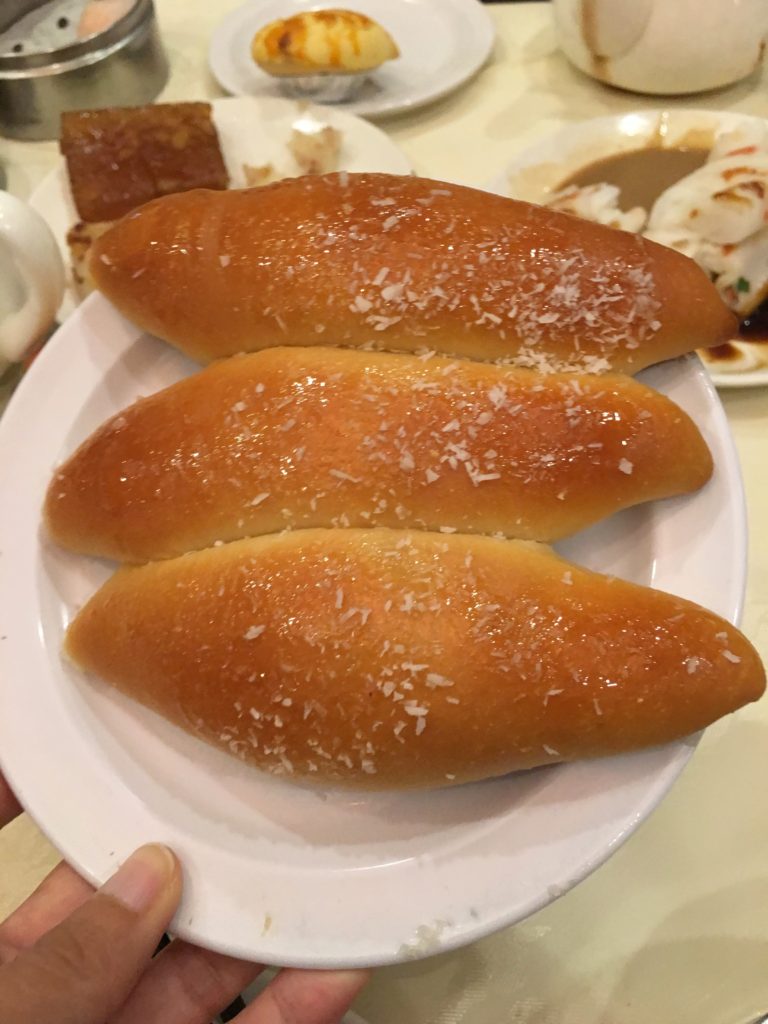 Located at Atlantic Times Square Plaza above 24 Hour Fitness is Atlantic Seafood, a dim sum restaurant with a good ambience that’s also quite affordable. If you’re a wine lover, you’ll love the grandiose displays of expensive wine. If you have a larger party, big private rooms are an option. Unless you go on a weekday, expect to wait in line. There’s a lot nearby to do and see — it’s hard to be bored in Atlantic Times Square, which also boasts an AMC theatre, a slew of Korean skincare shops, and tons of other shopping and food choices. Although most the dishes here are above par, the hands-down star dish is the mini salted egg yolk pineapple buns that are carried out on trays. 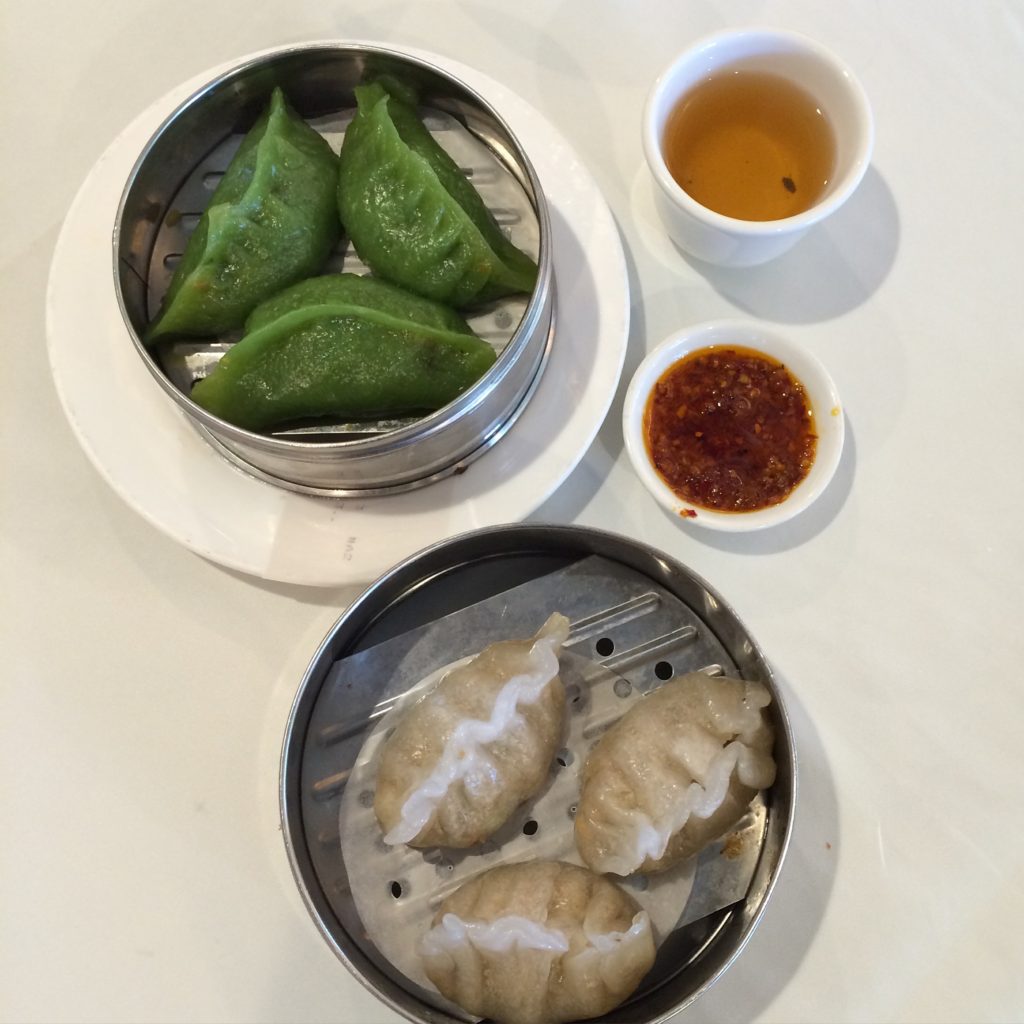 Located in Arcadia, China Red’s dim sum is traditional meets modern. You won’t find any ugly, outdated red and gold dragon phoenix decorations here. China Red is all about classy and modern, and that extends to their food too. There are no pushcarts here, but they do have the traditional dim sum favorites, as well as fun, inventive fusion dishes. All dishes are clearly labeled on a paper menu. There are no pictures, so you’ll need to study up on your dim sum dishes before going. Dumpling skins are delicate, thin, and chewy, and the buns have lots of flavor.

FYI: Parking may be tough, but there’s an additional lot located next door that many people don’t know about! 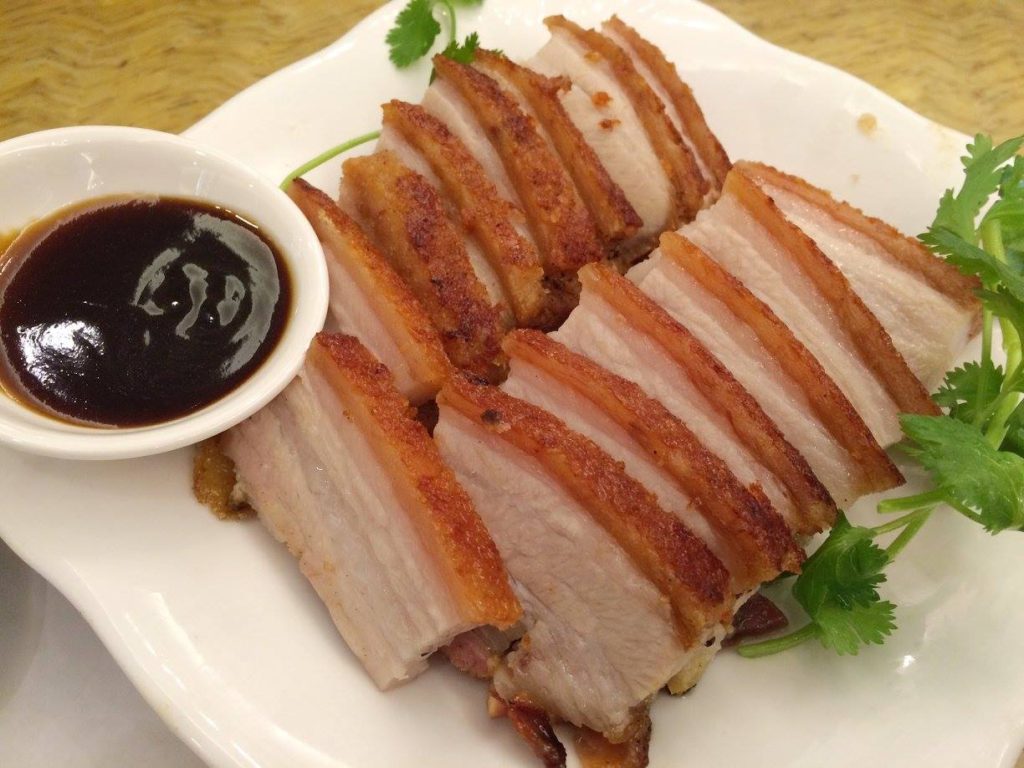 Elite in Monterey Park is another higher-end dim sum restaurant. Ordering is done via paper menu, rather than from carts, but they do have staff walking around with trays of fresh dim sum. Elite’s dumpling portions are bigger than average, so you do feel like you’re getting your money’s worth. Whereas most dim sum restaurants only have the typical BBQ pork, shrimp, or beef rice rolls, Elite has all that, plus their own take with a shrimp-and-asparagus rice roll. In addition to their traditional buns and dumplings, Elite also has fusion items such as fried taro cake with pork with a crust that will fall apart and melt in your mouth, a pork and wood ear mushroom-stuffed bean curd wrap in oyster sauce, scallop dumplings, and fried shrimp dumplings that other places don’t typically serve.

Want dim sum day or night? Lunasia is your answer! Usually, dim sum is only available as breakfast or lunch, but Lunasia is the only dim sum restaurant in the SGV that serves dim sum all day until 10 p.m. At Lunasia, there are no pushcarts, and they don’t steam dim sum until you order it. The venue is grand and ornate, and their dim sum are on the bigger side, including jumbo-sizes of the traditional har gow (shrimp dumpling) and siu mai (pork dumpling). There are two locations: the original Alhambra one and the newer, hipper Pasadena location.

Check out @munchies for my #dimsum intel @oceanstarmp. Shout out to @theglutster for making it happen! ☝🏼️link in bio

Ocean Star has reasonable prices, a big variety, and the classic cart-pushing experience. The restaurant is gigantic — it can host more than 300 people — so wait times are quite reasonable. Ocean Star’s dim sum gets the job done. The restaurant has a team of 12 people whose job it is to work solely on dim sum. They offer a few unique dishes, such as their snow bun with sweet taro paste, but for the most part Ocean Star’s forte is doing right by the traditional must-haves, such as shrimp rolls, siu mai pork dumplings, beef and chicken buns, and BBQ pork buns. The easy-to-read menu is loaded with tons of pictures. The large $15 crispy lobster noodle lunch special can be ordered during dim sum hours.

NBC has been around for ages and is one of the area’s eateries still offering the pushcart experience. The extensive menu offers lots of variety, and pictures of each dish are labeled in both Chinese and English for easy ordering. Go before 11 a.m. for the best variety and minimal wait times. Dim sum is average, but the restaurant has remained an SGV staple for decades. The standout dish at NBC is their steamed yellow Malaysian sponge cakes.

Kristie Hang is a jet setting freelance food and travel journalist featured in LA Weekly, LAist, Gothamist, MSNBC etc. She has a Masters in Broadcast Journalism from the University of Southern California’s Annenberg School of Journalism and a B.A. from UCLA. Find her online on Instagram @kristiehang.