The 10 Best Theaters in L.A. for a Vintage Moviegoing Experience

In the age of Netflix and HBO, actually going out to a movie can have a flair and a sense of eventfulness – an excitement that may not exactly match the scene from “Annie” where they all go to Radio City Music Hall, complete with a Rockettes pre-show… but almost.

L.A. has no shortage of modern and technologically superb multiplexes. But apart from the ArcLight and AMC, what are your options? Where are the best theaters in Los Angeles where you can actually have an experience that’s worth getting dressed up for?

While ankle-deep in old theaters-turned-retail establishments, L.A. still has plenty of single screens playing a variety of worthwhile films, both new and old – many featuring Q&A or other appearances from actors and directors.

I invite you to step back in time with these grand old Hollywood silver screens and get reacquainted with the anticipation that makes you want to sing, “Let’s go to the movies!” 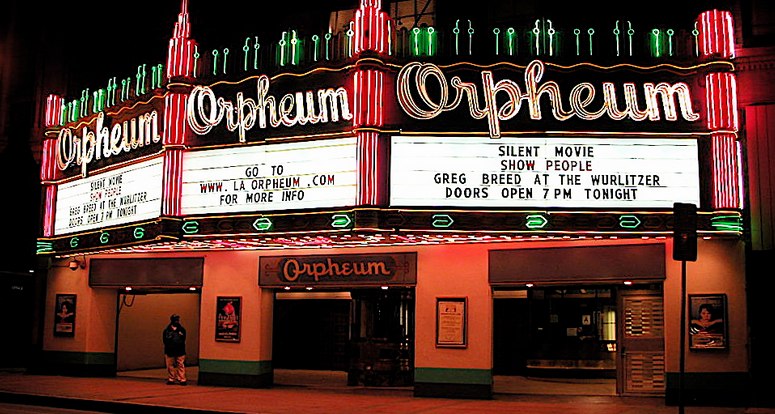 A honey of a historic theater, featuring the Mighty Wurlitzer, one of only three original theater organs still existing in Southern California theaters. The Orpheum offers seating for over 2,000 people with orchestra, loge, balcony and side box seating. You may recognize the interior from scenes in the Oscar-winning “The Artist,” or perhaps a recent episode of American Idol.

The neighborhood is shaping up nicely and offers plenty of things to do before and after your Orpheum show. Inside, you can get a glass of wine or beer at the cash bar and bring it into the show with you. The theater itself is gorgeous, with lavish and intricate furnishings, not to mention the sweeping staircase as you come in (which you might also recognize from “The Last Action Hero”).

2. The Theatre at Ace Hotel

Having originally opened as the United Artists Theatre in 1927, the lovingly restored 1,600-seater retains much of the charm and charisma instilled by its iconic founders, namely Mary Pickford and Charlie Chaplin. With architecture inspired by the Spanish Gothic style, richly illustrated murals, and a vaulted ceiling covered in tiny glimmering mirrors, it may be tough to keep your eyes on the screen.

An evening at this theatre is probably about as close as you can get to European looks without actually buying a plane ticket. And it’s attached to a hotel and restaurant, so if you get sleepy or hungry after the show, there’s no need to seek shelter elsewhere.

With a 1911 birthday, this is the oldest of the three Broadway theaters recommended here. The Palace still has a faded majesty about it. It feels old, but in a cool way. The theater was designed in a French renaissance style, with the facade featuring four figures to represent the muses of vaudeville: music, song, dance and drama. Impress your fellow moviegoers with that tidbit.

From the lush velvet interiors to the antique paintings, The Palace keeps much of its original look and feel. The 1,100 seats offer a great view of the stage or screen. You may want to consider taking a date – this is where Michael Jackson shot the opening of Thriller, after all.

The icon of icons, stuck right in the touristy-est of tourist attractions, Grauman’s Chinese Theatre can still draw locals to the film festivals it hosts and the recent addition of an Imax screen. Established in 1927, it was arguably the most spectacular theater of its day – Sid Grauman’s third theater, his “dream” project. With artifacts imported from China as well as statuary made specifically for the theater by Chinese artisans, the dream became reality.

The theater’s imposing facade is still a landmark on the boulevard, and even those visitors not given to fanaticism might compare feet and hand prints with Julie Andrews or George Clooney. 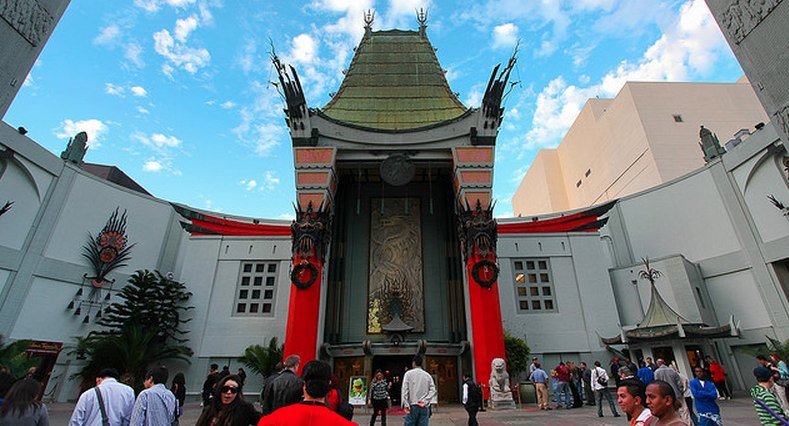 A fixture of Tinsel Town since 1923, originally dubbed the Lou Bard Playhouse. The Vista is a budget-friendly glimpse of Hollywood glam – matinee shows are only $5.50 and the popcorn is exquisite. In the vein of The Chinese Theatre, there are hand prints marking the sidewalk and beautifully restored Egyptian statues and murals decorate the place.

Not the least of its charms, manager Victor Martinez dons a variety of disguises to greet his guests. On any given night you may encounter Spiderman, Batman, the Phantom of the Opera, or Jack Sparrow.

Just a few skips down from the Chinese Theatre, The Egyptian is distinguished by an extensive courtyard setting it back from the street. The discovery of King Tut’s tomb in 1922 led to an Egyptian craze that swept the nation, influencing the design of Sid Grauman’s second theater with luxurious Egyptian motifs and golden scarab designs on the ceiling.

Apparently when it was first built, the Egyptian went so far as to feature an actor dressed as an Egyptian guard, pacing the roof parapet with rifle in hand and signalling the start of each show. Somehow I doubt that would go down well for today’s audiences.

But the less menacing aspects of Grauman’s grand vision are still here for us to enjoy – along with what’s said to be the best theater popcorn in the city.

You might wonder, what is Disney doing on a list dedicated to movie viewing for grownups? Well, even with animation featuring prominently on the marquee, no one puts on a show like Disney. The fully restored 1926 Spanish Colonial architecture is a treat for the eyes, while the live organ player, props and costumes on exhibit, and Laser Light Show Extravaganza will dazzle the rest of your senses.

El Capitan may be old, but it’s been outfitted with the latest technology – Dolby sound, digital projectors, and 3D. You’ll pay a little more than you might otherwise expect, but the movie and pre-show combo do not disappoint for a true celebration of movie magic.

The Aero Theatre was originally opened in 1939 as a continuous 24-hour movie theater for round-the-clock aircraft workers. It later became a beloved neighborhood theater and has anchored the upscale Montana Avenue section of Santa Monica. 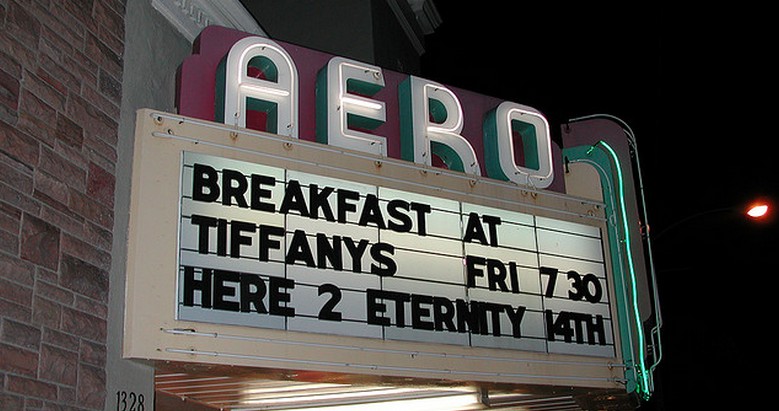 The intimately sized 1940 structure comes with a stage and a dance floor, decorated with luminescent murals of L.A. and a night sky effect on the ceiling. Less ornate than some of the other venues on this list, The Crest is nevertheless a beautiful space. And it has snacks.

And now for something completely different… This modern, ultra clean lines theater showcases indie productions in a facility that doesn’t even bother specifying when it was built. The stadium style seating for 200+ includes 16 reclining sofa seats, somehow managing to pull off both a streamlined yet cozy feel. Like an IKEA living room.

Cinespia is responsible for the legendary and hugely popular series of movie screenings at Hollywood Forever Cemetery. Keep an eye on the website for the 2015 schedule – this is definitely one for everyone to experience.

Did you know L.A. has a drive-in? Electric Dusk Drive-In offers pet-friendly features and double features year round, with al fresco seating on astroturf at the front of the lot or traditional stacked parking for cars.

Whether your leanings lie toward the fresh and fringe or the tried and true, L.A. has a movie venue for you. Let’s get out our daytimers and plan an appropriately adult outing. This town was made for movies – since we live here, we should see some!

What’s your favorite theater in Los Angeles? Let us know in the comments below!