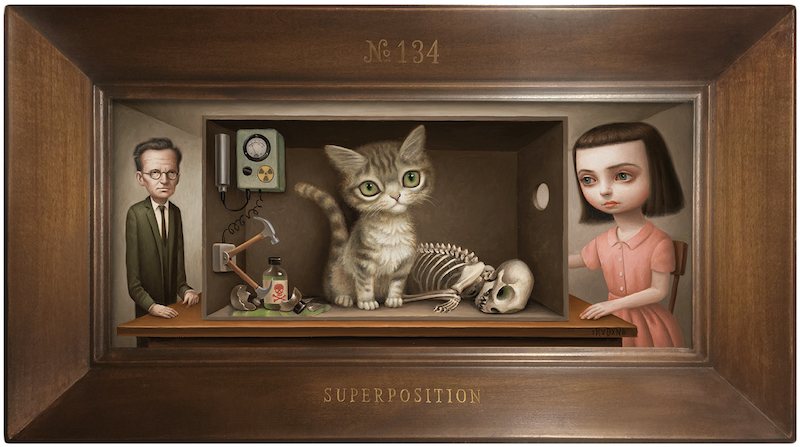 Cat Art Show’s Susan Michals, who also founded CatCon, is a former journalist and current cat enthusiast. She said she created these feline-centric events as a way for people to connect in the real world as opposed to the virtual one, and to share experiences together. After all, cat videos have siphoned countless hours of our time, but it’s nothing compared to gathering with your fellow cat lovers to look at a trove of cat art.

“Cats are beautiful creatures, both inside and out, and have been revered since the days of ancient Egypt,” Michals says. “They can be found in museums the world over.”

She points to a 2015 Brooklyn Museum exhibit, Divine Felines: Cats of Ancient Egypt, which contained a bevy of objects including sculptures, amulets, and even cat-shaped wooden coffins meant to house cat mummies. The exhibit toured to a handful of other museums, including the Smithsonian in D.C. in 2017. According to Antonietta Catanzariti, a curatorial fellow with the Smithsonian at the time, Egyptians did not worship cats as gods, contrary to popular belief. They were actually associating the behavior of cats—the way they might hunt or protect their families—to specific deities.

“For some people, it’s quite hard to see how that works, but then when you think about how a cat you own has a hunting attitude or is more relaxed, it can be related to Egyptian gods and goddesses,” she told the Washington Diplomat. “Don’t think of Egyptians as worshipping animals, but as observing the natural world.”

It’s not so far off from associating a cat with, say, grumpiness or the desire to buy a boat. So when you think about it, humans have, in a way, been making cat art and cat memes for a long, long time. 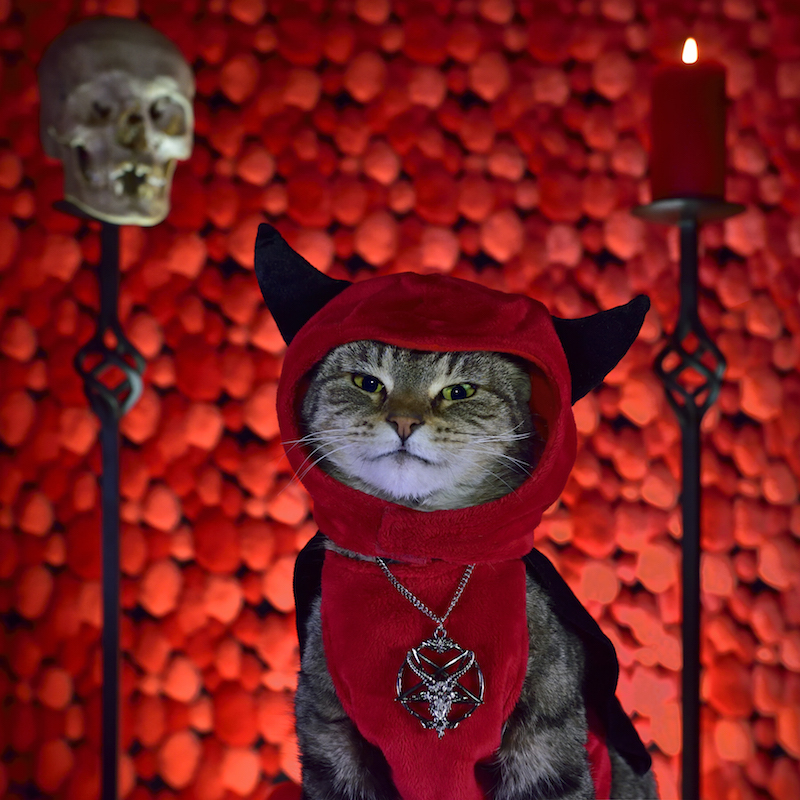 Cat Art Show has grown over the years, now featuring more artworks than ever before. While they saw some 4,500 guests in 2014, Michals says they’re expecting about 10,000 visitors over the course of this year’s 10-day run. These guests might find work from “godfather of pop-surrealism” Mark Ryden, German photographer Ellen von Unwerth, and Los Angeles’ own Dr. Paul Koudounaris, who will also present a lecture on cats throughout history on June 21.

Michals has several pieces she’s excited to see in this year’s show, including Tiffany Sage’s painting “Apollo and Garfield,” in which an orange tabby is cradled by a person in a Garfield mask. There are also two pieces from Serbian painter Endre Penovác, whose watercolor cats bleed into the paper like a passing apparition. Scott Hove, who previously installed a ‘cake maze‘ at Think Tank Gallery in 2016, now offers a cat sculpture in the same style, called “Kittycake.”

Some of the artwork is political, like Rose Freymuth-Frazier’s “Divine Intervention,” in which a fluffy, white cat with amber eyes places one paw on a stuffed Trump toy. Other pieces are more playful, like Penelope Gazin’s “Pussy Princess,” in which a beautiful woman in a green gown wears a similar fluffy, white cat on her head.

“I love Jayne Mansfield and [the piece] reminds me of her, plus it’s got a great camp quality to it that reminds us to lighten up and have a laugh,” Michals said.

Proceeds from the Cat Art Show will benefit two different charities: Kitten Rescue, a volunteer-run rescue for homeless kittens and cats, and the Ian Somerhalder Foundation, which, among other efforts, offers funds to low-income pet owners for emergency animal care. (If you ever feel like becoming a volunteer at Kitten Rescue, their Atwater Village no-kill sanctuary always needs people to help socialize and care for their animals.)

And yes, Michals does have a cat of her own: a Maine Coon named Miss Kitty Pretty Girl, rescued from a South Central shelter when she was just eight weeks old on what was to be her last day. Miss Kitty is now 13 and Michals calls her, appropriately, “The Muse.”

There will be a public opening on June 14 from 8 to 11 p.m. with a full cash bar, vegan food via Beyond Vegan, and a photo booth from Vetted Pet Care. Tickets are $10. Starting June 15, gallery hours will be daily from noon to 5 p.m. Admission is free on weekdays and $5 on weekends.

On June 21 from 7 to 10 p.m., Dr. Paul Koudounaris will present his lecture, Feline Frolic: An Evening of Famous Feline History with PURRlesque PURRformances by Vanessa Burgundy and Iza La Vamp. Cash bar. Tickets are $20.

On June 23 from 7 to 10 p.m., there will be a closing party with adoptable kittens from Kitten Rescue LA and a photo booth via Vetted Pet Care. Tickets are $25 and include two cocktails. Find all ticketing info here.