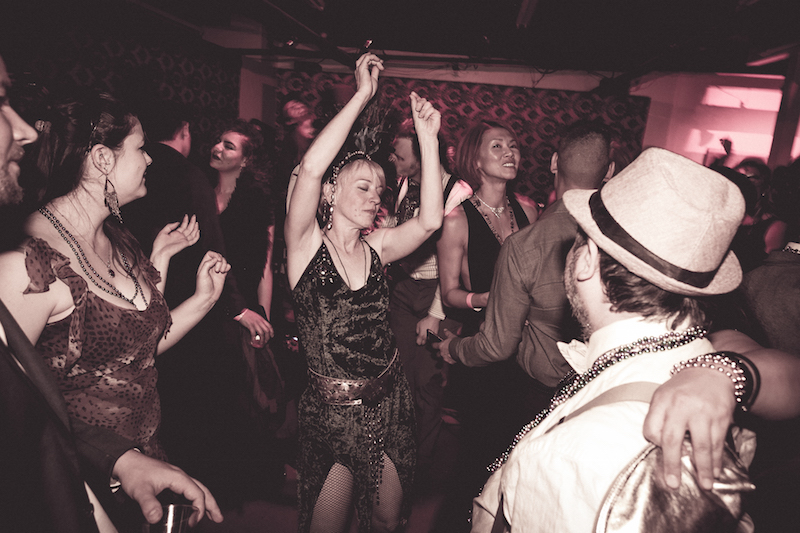 Drunken Devil parties are fun. The booze is free-flowing, the dance floor alluring, and sexy performances pepper an increasingly hazy evening. Yet something is just a little bit off. Maybe it’s that skull in the floral centerpiece or the man who just folded a wooden cross into your hand “for your protection.” Perhaps it’s the guest gregariously socializing in spite of what appears to be a mortal stab wound. Or it could be the actual devil, replete with crimson skin and horns, hanging out like it’s just another soiree in Hell. Drunken Devil parties live somewhere between the debauchery of Studio 54 and the aesthetic of Halloween, but you don’t have to wait until October to attend. In fact, the next exploitation film-themed fête, Sin-A-Rama, is just around on the corner on June 23.

When Drunken Devil founder Matt Dorado was a little boy, he loved Halloween. He would always go trick-or-treating in the late afternoon before returning to his family’s Pasadena home to prepare for nightfall. He’d decorate his lawn and front porch in ghoulish fashion, and lay in wait to scare unsuspecting candy seekers. When they’d ring the doorbell he’d drop wind-up teeth into the attached mailbox. They’d chatter and the trick-or-treaters would shriek and laugh, much to Dorado’s delight.

As Dorado grew up his passion for haunted houses never faded. He loved DIY home haunts and began putting on his very own as a student of Westmont College near Santa Barbara. It was controversial for the Christian school, Dorado recalls, saying there were opposing op-eds about whether Halloween haunts were evil or not.

“It was a glorious mess of differing opinions in the conservative world, but I just kind of grew into myself and decided this is what I like,” he said.

In 2012, he put together a haunted house off-campus for LGBT organization Pacific Pride Foundation as his senior project. The following year, he helmed an interactive haunt titled Nightmare House, in which group of just six at a time entered the mind of a killer.

By 2015, Dorado had moved to Los Angeles and founded Drunken Devil. Though his first event was a haunted house set in New Orleans, the concept has since evolved beyond jump scares and mazes to encompass boozy burlesque brunches, true crime dinners, and horror-tinged parties set in the immersive ‘drunken devil’ world. 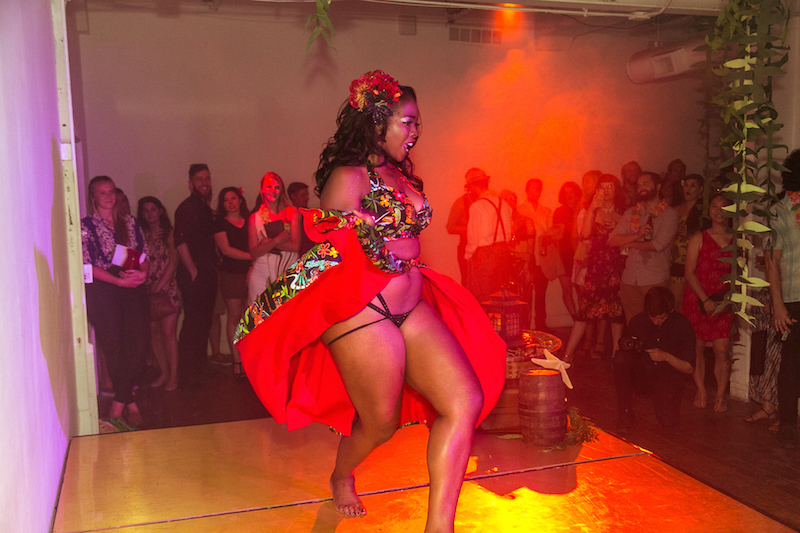 The burlesque brunches, known as Deviled Eggs, take place at DTLA’s Brackshop Tavern and rotate among themes like the Jazz Age, the 1970s, and fandoms.

“There are maybe 40 people [at each event], food is included, it’s very highly thematic, and the hosts are characters so there’s a little bit of interactivity,” Dorado said. “It’s nothing ever too serious because a) it’s brunch and b) it’s burlesque. That’s the light-hearted version of Drunken Devil. Everything else is dark and scary, and then we have Deviled Eggs because it’s fun.”

To Live and Di(n)e in L.A. is Drunken Devil’s true crime supper club, where guests sit down with actors portraying Los Angeles’ most notorious criminals. It’s much darker than anything else the group does, if only because it’s hard to relax when you’re sitting across from Susan Atkins. The message is a sly one; it forces its guests to ask themselves why they have such a fascination with crime and the macabre, and plays off the popularity of things like the Investigation Discovery network and podcasts like Serial and My Favorite Murder.

Yet Drunken Devil’s pièce de résistance is the rager. These parties are typically set in minimalistic spaces, with sporadic installations and roaming characters. Dorado describes them as “part-vaudeville, part-warehouse party, and part-haunted house.”

“What I really liked about warehouse parties was that sense of ‘ooh, I’m going somewhere I shouldn’t,'” he said. “You don’t get the address until the day of, and I really liked that mysterious feeling of not knowing where to go and being off the radar. But when you get there, you’re in this space where you don’t have to [care] about anything else.”

Dorado’s parties also tell a connected story, based around Faustian pacts various characters have made with his charismatic Mephistopheles to achieve their deepest desires. As such, each party nods to one of the seven deadly sins. 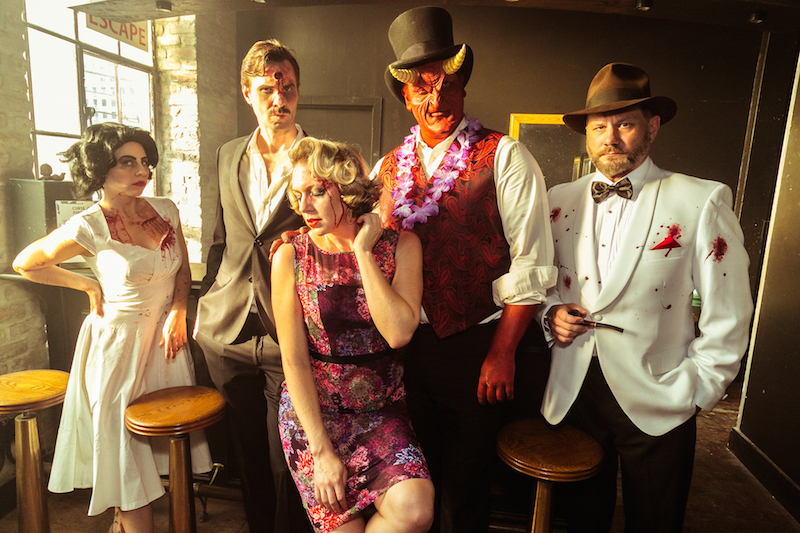 The devil himself hangs out with a few ghosts Photo: Chris Blaski

A tiki-themed party told the story of an explorer who, much like Indiana Jones, was constantly boosting ancient artifacts. Unlike Jones, however, he didn’t take them to a museum so much as he sold them on the black market to satisfy his own greed.

His most recent party, Bloody Gras, transported guests to the lust-filled Storyville, New Orlean’s red light district circa 1915. Here, Madame Mary Harlow and her employees achieved eternal youth for a price. It soon became apparent that the ‘ladies of the night’ who haunted the local brothel could, in fact, only come out at night. Guests were given a choice: allow the women to give them a taste of their elixir—presented in a glass bottle with a dropper, suspiciously tasting like straight liquor—or take a wooden cross from the vampire hunters who tried to protect the town. By the end of the night, the puncture wounds drawn onto most attendees’ throats indicated the majority been seduced by the dark side. The evening was punctuated by burlesque dancers Olivia Bellafontaine, Donna Hood, and Skylar Benton with sleazy blues accompaniment via the Dave Cavalier Trio. Rasputin’s Marionettes strolled throughout the evening, offering macabre puppet shows that involved a shifty-eyed Jack the Ripper-esque villain who stalked another puppet with a knife. 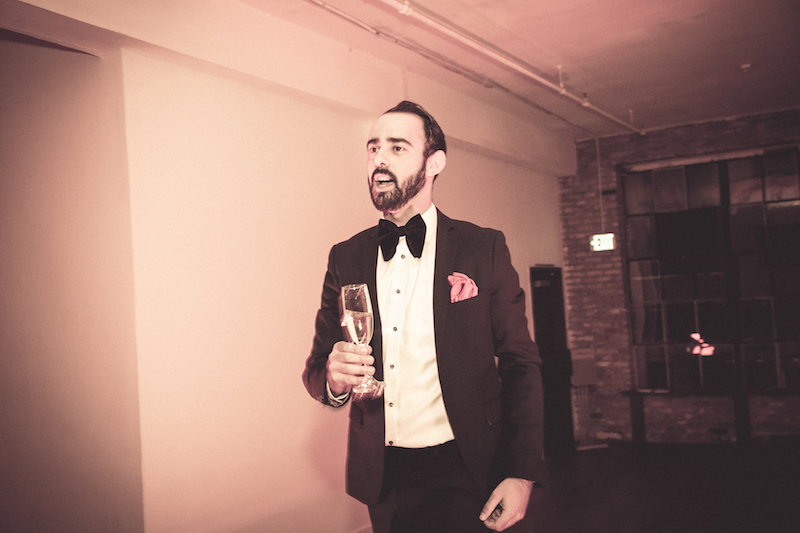 Yet as morbid as some of the party’s themes can be, the atmosphere is always a jovial one.

“Drunken Devil is a type of escapism,” Dorado said. “I want people enteritis wild world where you can walk away a little bit from all the real evil in the world and just have fun. That’s why I fell in love with haunted houses. It was the ‘boo’ scares, and being able to have fun in this shadow world for one season a year. And now I get to live it all year long.”

The upcoming Sin-A-Rama takes its cue from ’70s exploitation films. According to the Devil himself: “An egotistical film director has invited you to join him and a host of 70’s era film stars at the premiere of his latest picture. Upon arrival, however, you find yourself at a shuttered grindhouse theatre, where the red carpet has been stained with blood, and the glitz and glamour of Hollywood has been replaced with madness and mayhem. Perhaps this director and his methods are more sinister than one could possibly imagine…”

Sin-A-Rama takes place on Saturday, June 23 starting at 8 p.m. The event will include an open bar with beer, wine, and cocktails from Our/Los Angeles Vodka and Blackcraft Ghost Pepper Whiskey; burlesque; live music; DJs; concession snacks, and, of course, a diabolical atmosphere. Tickets are $80 and must be purchased online here.