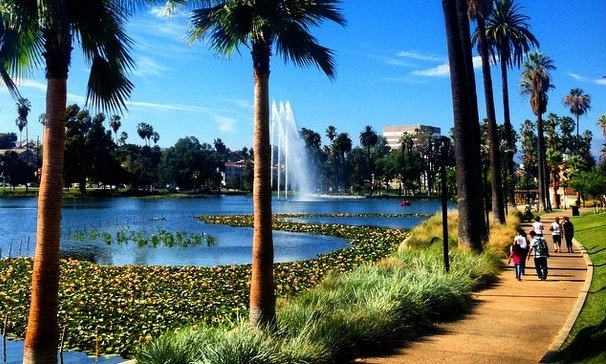 Once maligned, neglected and wrought with pollution, recent efforts to restore and rehabilitate the Echo Park Lake have transformed the area from a community blight into one of most enjoyable destinations in the entire city, as well as a proud neighborhood landmark.  Key features include fishing, pedal boats, a picnic area, a walking path, a boat house, and of course the Lotus Festival which returned to Echo Park Lake in 2014.

“In 2006, Echo Park Lake was identified by the State of California as an impaired water body. The lake was originally built in the 1860s as a reservoir for drinking water. Today Echo Park Lake is a Los Angeles icon that functions primarily as a detention basin in the City’s storm drain system, while providing recreational benefits and wildlife habitat. Echo Park Lake also plays host to community events, such as the Lotus Festival at Echo Park.”