In my lifetime there has been no other more exciting time to live in Los Angeles than the present (I was born in the 70’s btw). Our city suffered from massive suburbanization during the mid-20th-century that eroded a large part of its character but now we are moving back inward and seeing positive results from this trend.

Los Angeles is becoming more unified while many communities are still retaining their individuality. This allows us to think creatively about our future, organizing big infrastructure projects and initiatives that can reshape our city for the better.

While it’s true there are many big, underlying problems that need to be addressed (schools, drought, transportation.. this list could go on awhile), I’m choosing to focus on the positive in the space of this article. My perspective is that it’s a hopeful time in Los Angeles and everyday only gets better.

In that regard, here’s a few of the great movements in our city that I’m truly inspired to see unfold. Hopefully they’ll get you excited too!

With Los Angeles at its limits distributing traffic, the city is looking at new ways to repurpose our streets for people. The Mayor took the first step introducing his Great Streets Program, where specific corridors will enhance the character of these specific regions by adding such elements as parklets, furniture and trees. Another major step was the hiring away of Seleta Reynolds to lead our Department of Transportation. Coming from San Francisco, Reynolds played a large role in making their streets more livable for all modes of transportation. With an emphasis of providing better infrastructure for people who bike and walk, the results have proven safer streets for everybody.

For years many of us has thought of the LA River as a channel that funnels rainwater and collects trash. Some even wanted to turn it into a freeway. Now the river is in its renaissance period as it is being brought back to the people. You’ll now find people fishing, canoeing and getting up close with nature.

The Mayor and Army Corp are pushing for a $1 Billion plan to store an eleven mile stretch of the river to its natural habitat that will spur more business and residential development. Greenway 2020 is also pushing to close the gaps on the adjacent bike path to provide a continuous link over the entire fifty-one mile length. Ultimately, this will be a giant recreation zone that will redefine the perception that LA is just a beach town.

Measure R’s passage in the 2008 election sent a message that Angelenos wanted better public transportation options and Metro responded in force. In the past decade we’ve seen the Expo, Gold and Orange line open and perform above projections, while our Rapid buses are highly utilized.

Currently, the rail system expanding further as the Expo Line will reach Santa Monica next year, the Red Line will extend into Westwood and the Foothill Extension will take the Gold Line out to Azusa and then Montclair. The Crenshaw Line has broken ground and will be a connection to LAX. Also, the Regional Connector is underway and will provide better mobility around downtown. Think there’s enough going on?

It’s not just the under construction Metro line that is ushering this change, but the Crenshaw area was already in the midst of a revival. The Baldwin Hills Plaza recently got a makeover adding the Rave Theater movie complex and culinary favorite Post & Beam. Leimert Park is also filled with an assortment of unique small businesses adding to the neighborhood’s feel. When the Marlton Square redevelopment takes hold again, look for many to rediscover this historic community. 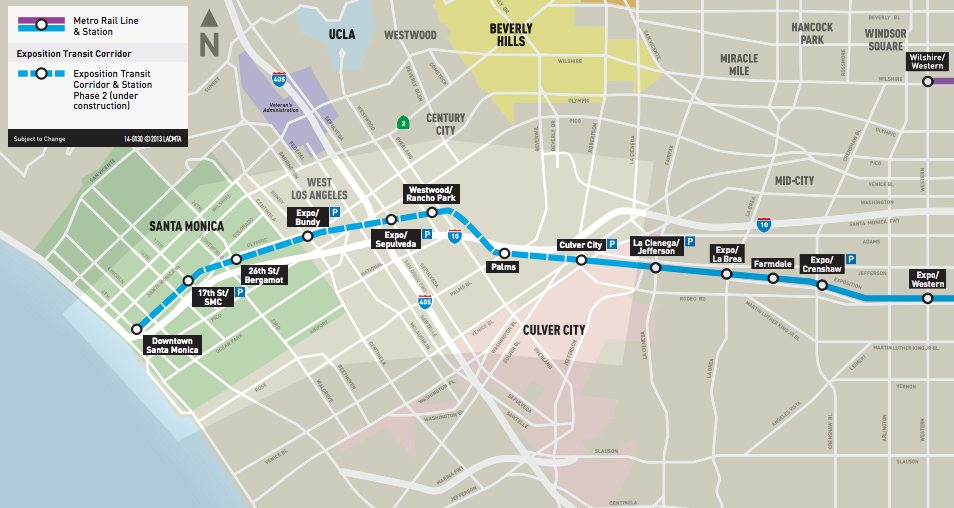 A map of phase 2 construction of the Expo Line. Credit: metro.net

Even though the Los Angeles County Museum of Art is already a popular destination, the campus is in the midst of a complete overhaul that will expand its floor space and modernize its look. Now that the first phase of the Broad Contemporary Art Museum has opened, the next step is a complete teardown of the eastern set of buildings. It is slated to be replaced by a single structure providing 400,000 feet of gallery space that will sprawl over Wilshire Boulevard.

The May Company building will also be converted to the new Academy Museum of Motion Pictures, with a giant, iconic sphere on the northside. Across the street, the Peterson Auto Museum is in the midst of a radical remodel that would make Frank Gehry smile.

With our airport claiming the title of our nation’s busiest for Thanksgiving, you would hope that it was the most modern. While the amenities has been lacking, LAX is in the midst of a remodel that will update the look and functionality of our main airport. Already, the new Tom Bradley International Terminal has opened to rave reviews with food options better than most shopping malls.

The airport is in the process of renovating all of its terminals, with the Alaska Terminal recently completed and a Southwest and Terminal 2 makeover under construction. There is also great hope that a people connector will link travelers to the Crenshaw Line. Now if we can only get a restaurant the fill the void in the Theme Building.

At some point, Los Angeles will end up with an NFL team or two. It would have been sooner, but we’ve been more reluctant that other cities to fully subsidize stadiums(thankfully). When football does return, it’ll be a state of the art facility that will cater to the city’s elite, similar to Staples Center. While there is wide speculation about which teams will relocate, it is certain that the Super Bowl will return to the NFL’s regular rotation once a stadium is built. Analysts believe that the game can have over a half billion dollar impact on the economy. Makes you want to bring football back.

Already one of Los Angeles’ most exciting developing areas, the Arts District is poised to continue its growth at an exponential rate. It has remained a secret the past few decades, but now this neighborhood is flourishing with some of the city’s best new shops, galleries and restaurants while shunning corporate chains. Many large complexes are on their way, but also a share of historic, older buildings are part of the redevelopment.

Look for 2019, when the Sixth Street Viaduct will be an iconic structure taking eastsiders from Boyle Heights into the heart of the Arts District.

Once our city’s main commercial and theatrical thoroughfare, Broadway’s vibrancy waned as the freeways shuttled our population out to the suburbs. With the trend of people returning to our inner core, downtown looks to retain its vibrancy from its golden age. Our once shuttered theaters are being restored to their original, ornate beauty and reopening for a variety of uses.

The city has also launched “Bringing Back Broadway”, a streetscape plan to make the street more of a public space to make it people friendly. With the addition the newly opened Ace Hotel, expect Broadway to return as a main destination.

It’s hard to imagine that a city of our prominence has not had a skyscraper of this magnitude built for over twenty years. LA Live might be considered the exception(it’s only our 11th tallest building), but the Grand Wilshire Tower will be over 50% taller than its Staples Center counterpart.

When completed, this skyscraper will reach 1,100 feet, making it the tallest building west of Chicago. With Mayor Garcetti lifting restrictions on requiring flat roof high rises, expect the Grand Wilshire to usher in an exciting era of a new Los Angeles skyline. 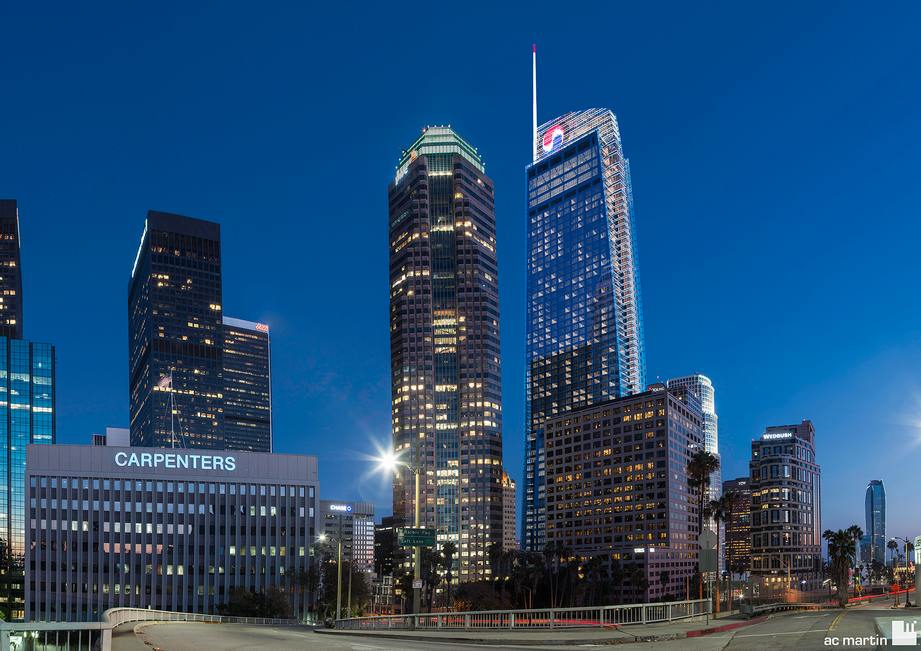 A rendering of the Wilshire Grand Tower. Credit: wilshiregrandcenter.com

Last month, President Obama declared a large portion of the Angeles National Forest and surrounding ranges into this newly designated National Monument. The San Gabriel Mountains contains great hiking, natural beauty and historical idiosyncrasies that many Angelenos may not be aware of. Angeles Crest Highway, Mount Wilson Observatory and the Bridge to Nowhere are some of the many noted attractions included in this park. This new specification will bring more resources and attention to this region adding to the San Gabriel’s popularity.

While still early in the process, Los Angeles is set to be a prime candidate for either the 2024 or 2028 games. Seeing how the Summer Games haven’t set foot in North America this century, it’s time the legacy of our city redefining the modern Olympics returns, as we did in 1932 and 1984. We have all the sporting facilities built(the Coliseum will have to add back the track) and proven we can hold a successful Games. With all this promise in our future, what better place to gain the attention of the world.

What are you most excited about to see the progress of in the coming years for the city of Los Angeles?