Looking for a fun, free weekend activity that showcases cool art and educates you on our city’s ever-expanding public transit system?

Consider Metro Art Moves, a free series of regularly scheduled and special tours showcasing the diverse range of site-specific artworks that are featured within the Metro Rail system.

Among the current featured programs is a second Sunday tour of Union Station (being provided June – December) as part of a celebration of the 75th anniversary of historic Los Angeles transit center.

Led by trained Metro Art Docents, these tours will explore artworks located in the Gold Line Portal, East Portal and inside the Metro Gateway Headquarters Buildings, plus you’ll get access to spaces not generally open to the public, including the old ticket concourse and former Fred Harvey restaurant.

Oh yeah, and did we mention the tours are totally free and there are no reservations required.

[UPDATE: We’ve updated this post and added the new dates for 2016 below!]

Here are the scheduled dates for all of 2016:

The second Sunday tours meet at the information booth inside the Alameda Street entrance to Union Station. 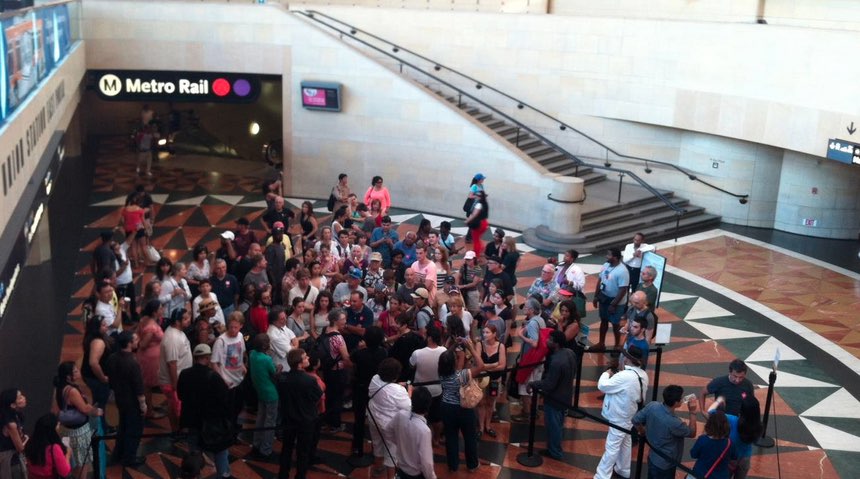 In addition to the second Sunday tours, there are two other regularly scheduled tours provided by Metro (held year-round).

These docent led tours focus on educating the public about art work created in the Red Line Stations, how to navigate Metro and what destinations can be accessed by using the Metro.

The first meets every first Saturday from 10:00am – 12:00pm at the street level entrance to the Hollywood/Highland Metro Rail Station

The second tour meets every Sunday from 10:00am – 12:00pm at the information booth inside the entrance to historic Union Station at 800 Alameda St in Downtown Los Angeles.

Remember these tours are mostly walking (they saying 90% walking on their website so be prepared to be on your feet for awhile.)

Docents will provide tour attendees with free TAP cards that are pre-loaded with day passes.