There are miles of unique underground tunnels and pedestrian crossing that stretch below the surface of Los Angeles, but sometimes what makes the space special isn’t the locale, but the people that impact them.

Quinones is a Highland Park native and the owner of Antigua Coffee House in Cypress Park. When he first opened up shop some eight years ago the nearby pedestrian tunnel that stretched underneath Figueroa was closed off, the result of city efforts to curb crime and gang activity in the area. While some might have simply observed the blight, Quinones recognized the opportunity impended in the tunnel, and soon enough he was spearheading an effort for funding to create a vibrant public space.

I will quote here at length from original reporting done by The Eastsider LA back in 2013 on Quinones’ journey to push for the reopening of the tunnel (I recommend reading the full story):

“When Quinones and his wife Fabiola opened Antigua in 2007, they sent a letter to the Department of Transportation about reopening the tunnel.  But the couple received only a form letter about their concern…

By October 2012 Quinones still did not have a solid answer. He would attend city council meetings or be in the same room with his city council member – “Any word on my tunnel?” he would ask as a joke. Eventually Jose Gardea, chief of staff to the outgoing council member Ed Reyes, came to Antigua and observed the foot traffic and gave Quinones the go ahead.” 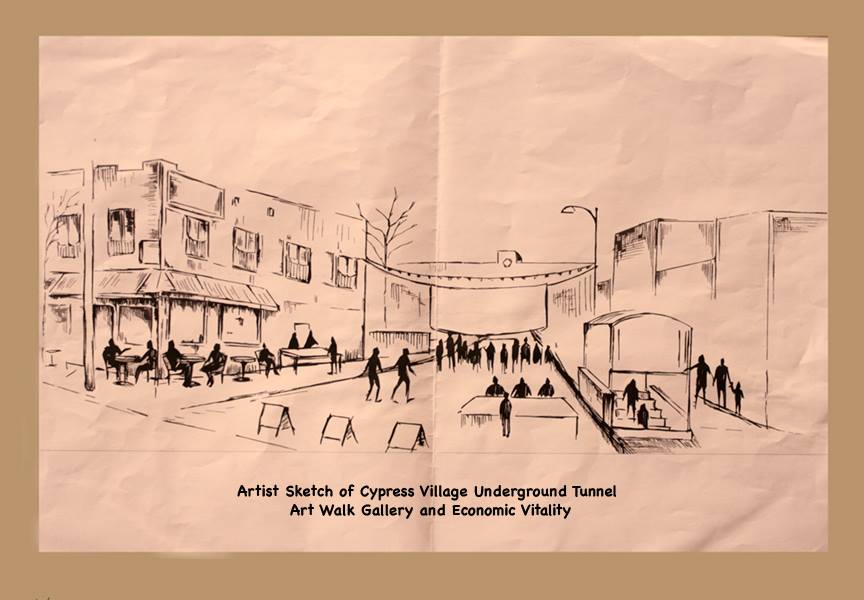 The “go ahead” included a $9,000 grant from the city, and work on the tunnel was soon begun and a public art walk event was created around the revitalization of the space.

This Saturday in Cypress Park, Quinones’ vision continues to unfold with the the 3rd annual Underground Tunnel Art Walk.

The Art Walk will feature art (at least 9 different artists on display), live music, spoken word readings, crafts, and a special commemoration of the life and work of Richard Duardo. Duardo was a Master Printer from Highland Park, who some have called ‘The Warhol of The West.” Duardo passed away last November.

It all goes down at 3400 N. Figueroa St., Los Angeles CA 90065. Check out the Underground Art Tunnel Facebook Page for more information and updates.