As a diehard angeleno I’ve always sort of written Orange County off as a nearby destination for anything besides (maybe) Disneyland. People speak of other things existing there, but like, is that actually true?

Well, the folks who run Travel Costa Mesa had a challenge for me: Come to their city for a one day/night stay and provide some honest feedback about my experience.

The burning question: Would this hardboiled citizen of Los Angeles soften his cemented feelings about The OC? Let’s find out.

How I got Down there: The Tesloop

A major reason I’ve avoided taking a staycation in Costa Mesa (or all of Orange County for that matter) is that I’ve always thought driving down is a pain. And since I’m a big drinker, driving my own car is just never a good idea. But Ubers and Lyfts get very pricey at that mileage.

Lucky for me, part of my invite was to ride in a Tesla, courtesy of Tesloop, which is a thing.

If you’re not familiar with this service, it’s something you need to check out. It’s basically a fleet of Tesla X SUVs that shuttle you from L.A. to San Diego for surprisingly reasonable rates (you can get a trip to SD for as little as $29). You book a seat with prices varying depending on where you sit in the car (AKA, shotgun is a little more costly).

The other thing about Tesloop is that most of these cars are enabled with AI which means that they drive themselves. You’ll have a driver there to make sure it all goes according to plan and the robots don’t take over and kidnap you, but it’s actually extremely smooth and not as terrifying as I expected. The Teslas themselves are equipped with WiFi, complimentary snacks, comfy seats, and tons of legroom. So yeah, it’s much easier to get down there than I expected.

So how do you fill a day/night/morning-after in Costa Mesa? I hit close to a dozen spots in a 24-hour whirlwind tour. Here’s how it went down.

10 a.m — Hop into a robot sled and head down south

Once you figure out which Tesloop pickup is best for you then you meet your “pilot” (they call them pilots for some reason) and enjoy your trip — at least, as much as you can while you’re praying that it won’t throw itself into oncoming traffic. I’m fascinated (read: terrified) of AI in general so I had lots of questions about how the car operates. Eight cameras and twelve sensors surround the Tesla X, providing 360 degree views around the car. The entire system is designed to read and recognize the lanes, meaning it will drive in the direct center for the most part.

How it knows when the lines are faded or gone, I have no idea. It’s surprisingly responsive, and (luckily for my nerves) requires the driver to have their hands on the wheel at all times. If the driver’s hands aren’t present, it will move all the way across the freeway until it finds a shoulder or some other place to park, shut down the entire car, and alert Tesla HQ. Sounds like a good idea, unless you’re me and all you heard was “the car has the ability to stop you from controlling it and going literally wherever it wants on the road”. Artificial Intelligence is insane.

The car itself is nice, there’s no way about it. It’s entirely touchscreen operated on a screen so huge you legitimately feel like you’re flying in a spaceship. To make a long story short, Tesloop is rad and I definitely recommend you take it. 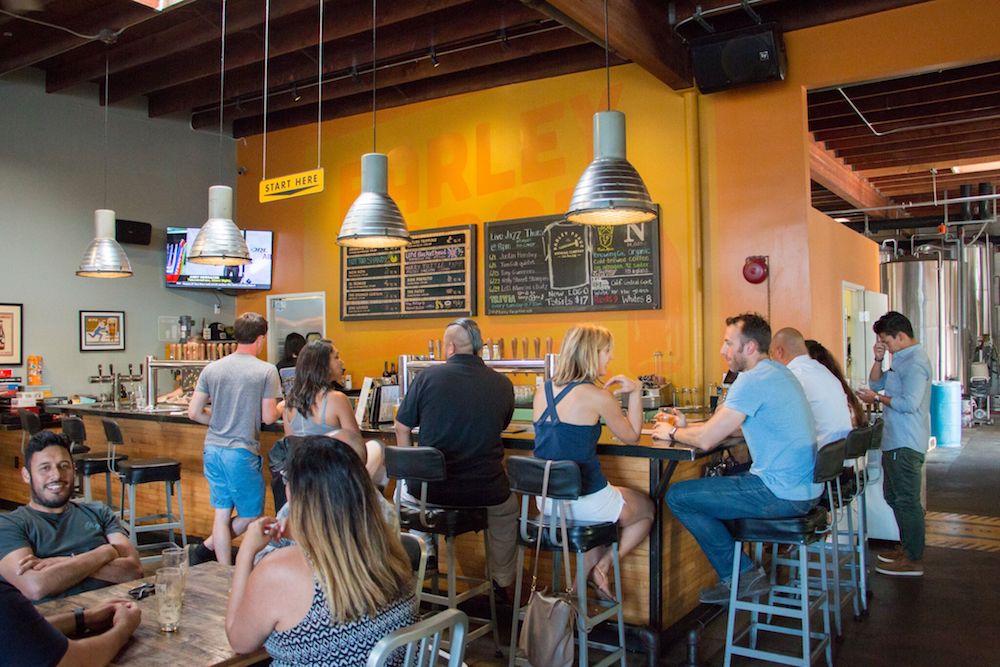 You probably already know that Anaheim is crushing it on the beer front, but Costa Mesa is starting to make their mark as well — Barley Forge Brewing Co. (which just won OC Weekly’s “Best Brewery”) is right in the center of the action and brewing some of the tastiest beers for miles. Their tap room is big and spacious, so grab some friends and sip on a few great beers, especially the “Patsy” coconut stout & the “A Scanner Tartly” sour with cherries. Not enough beer for you? Gunwhale Ales is brand spankin’ new and just across the street, so give them a look.

Just around the corner you’ll find a bunch of things that can easily fill the bulk of your day. Start off at The LAB, a sort of “anti-mall” outdoor shopping space. If you’re like me and gigantic malls give you anxiety, this extremely chill open-air space will be exactly what you want. Habana, a chic Cuban spot, has been the cornerstone of the mall since its inception 25 years ago and definitely where you’ll want to have some lunch (share a bunch of stuff– the food is great).

Want an after-lunch cocktail? Ruin Bar is right next door and offers some inventive Soju cocktails and a solid beer list. Sleepy from too many daytime drinks? Nook Coffee is doing artisanal coffee on the cheap. Cuban food not overdone and trendy enough for you? Calipoke is doing poke bowls. The LAB has you pretty much covered.

If you’re looking to stock up on any number of very rad things, Seed Market is where you want to be, and only a short walk from The LAB. You’ll find a ton of boutique and artisanal items at this indoor market, especially outdoorsy/adventure-type stuff. It’s absolutely worth a look.

If you’re a wine person, Wine Lab is also a short walk and is sure to satisfy all your vino needs. Water Grill also has a spot in South Coast Plaza, so if draft beer and oysters on the half shell are more your speed you will be just fine. 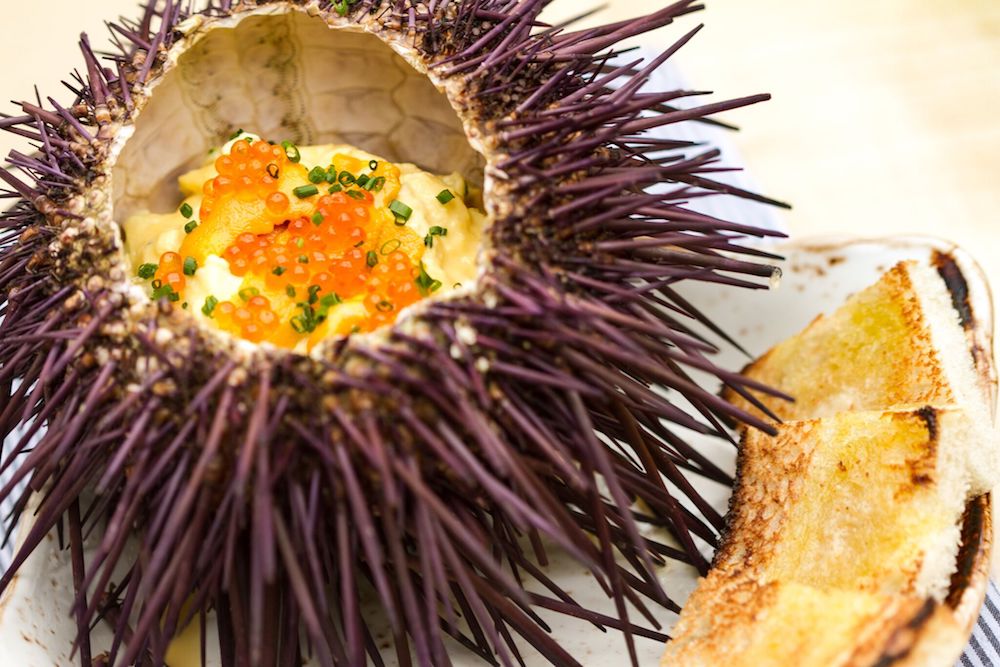 The Fresh Uni at Vaca. Image via Travel Costa Mesa

7 p.m. — Rally the finest crew you have and eat at Vaca

Top Chef finalist Amar Santana is crushing it at Vaca with tapas and shared plates, so you’ll definitely want your fiercest eating crew at your side. The erizos con huevo (fresh uni, scrambled eggs, and trout roe) will jump off the menu as an obvious choice. Order it. The less obvious, though, is Vaca’s canelon de pollo ahumado (smoked chicken cannelloni, foie gras sauce, and sherry reduction), which is legitimately one of the tastiest things I’ve ever eaten.

Mesa is a popular local hang, featuring a loungey, live-music vibe (and if you’re somehow still hungry from Vaca, they have bites at the ready). It can get pretty lively, so if you’re looking for a more relaxed vibe, head over to Boathouse Collective. The place is a boathouse-turned-lounge with much more chill drinks and live music. Either way, the nightlife is rip roarin’ ready for you. 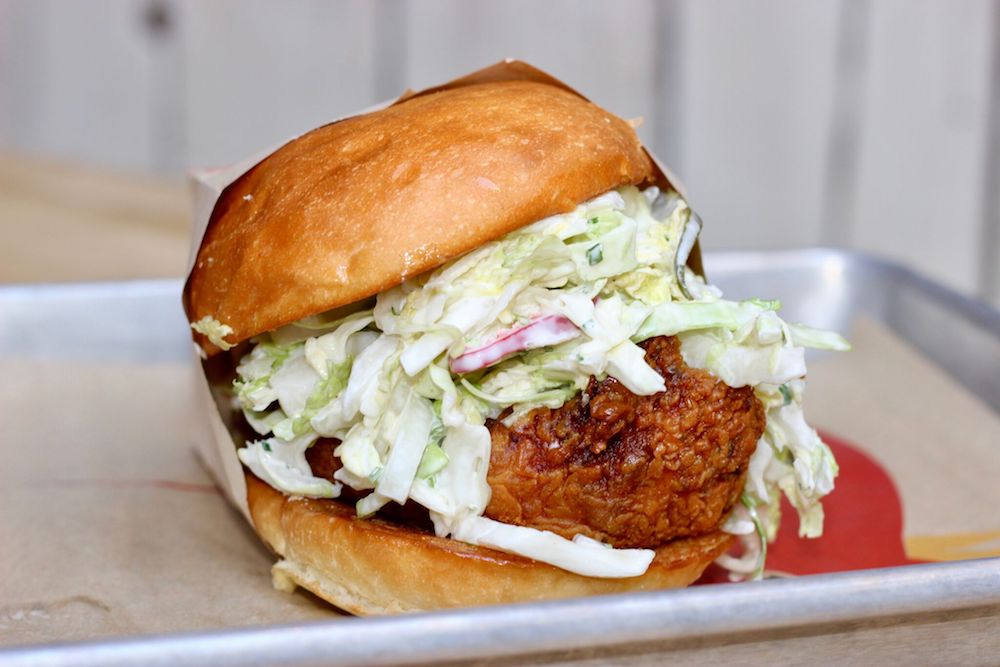 The Morning After — Brunch at The Crack Shack Before Heading Home

If you did as much damage as I did, you’ll be in need of a nice hearty brunch. The Crack Shack is the fried chicken haven you crave for such an occasion. They’re doing a ton of inventive things (like matzoh ball pozole and chicken sausage breakfast sandwiches) as well as some straight up rockstar fried chicken sandwiches. The “Coop Deville” (fried chicken, pickled fresno chilies, lime mayo, and napa cabbage on brioche) is nothing short of a grand slam.

The biggest surprise about this entire experience was not just that I very easily filled up my day, but rather that I found myself wishing I had left L.A. earlier so I would have more time. I packed a day full of stuff in Costa Mesa extremely easily. It’s truly the overnight destination they’re presenting themselves as, and I highly recommend you jump in a robot car and slide on down there to see (and taste) it for yourself.

Wilder Shaw is a Los Angeles-based writer and comedian who usually has tacos in his hands and sandwiches on his mind. Follow him here on Instagram and Twitter.