Here’s the Complete Calendar of Grunion Runs for Summer 2015

So who wants to see the miracle of nature on full display?!?

And by miracle I’m referring to the amazing life cycle patterns of the California grunion. Their moonlight spawning ritual is known as a grunion run, which if you’ve never seen, is pretty damn remarkable.

For the uninitiated, here’s a description of what happens via the California Department of Fish & Wildlife:

“Grunion leave the water at night to spawn on beaches during the spring and summer months. For four consecutive nights, beginning on the nights of the full and new moons, spawning occurs after high tides and continues for several hours. As waves break on the beach, grunion swim as far up the slope as possible. The female arches her body and excavates the semi-fluid sand with her tail to create a nest. She twists her body and digs into the sand until she is half buried, with her head sticking up. She then deposits her eggs in the nest. Males curve around the female and release milt. The milt flows down the female’s body until it reaches and fertilizes the eggs. As many as eight males may fertilize the eggs in a single nest. After spawning, the males immediately retreat toward the water while the female twists free and returns with the next wave. While spawning may only take 30 seconds, some fish remain stranded on the beach for several minutes.” 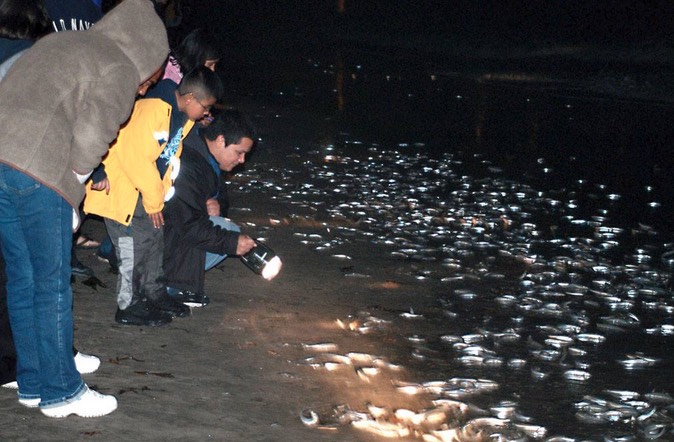 Grunion spawning generally occurs from March through August with peak spawning from late March to early June.  Females may spawn up to six times each season, laying between 1,600 and 3,600 eggs during one spawn (or more!).

Although the CDFG does not recommend any specific California beaches for observing the summer grunion spawning, the Cabrillo Marine Aquarium in San Pedro has three scheduled ‘Meet the Grunion’ events set for June/July. Each event includes an educational auditorium program and guided observation at the beach during the spawning. The cost is $5 for adult, non-members. Dates are as follows:

More information is available via the calendar page on the Cabrillo Marine Aquarium website.

Keep in mind a California fishing license is required for persons 16 years and older collecting grunion. Grunion may be taken by hand only. No holes may be dug in the beach to entrap them. Per government guidelines there is no bag limit, but it is recommended to take only the fish you can use . It is unlawful and unethical to waste fish.

* Note that where the forecast run starts at or after midnight, the date of the previous evening is shown.