The L.A. Bacon Festival is Coming Back to DTLA in May

The bad news: The Magic Box turned out to be a not so ideal indoor venue considering the El Nino concerns. We were limited to the number of vendors we could have inside, and with over 50 confirmed restaurants, we didn’t want to compromise the quality of the event.

The good news: We have a great outdoor venue at LA Center Studios and we decided to move the event to May 1st rather then canceling the event. We won’t have to compromise the quality of the event and you can still get your taste of over 50 signature bacon dishes.

For those that already have tickets, they are still valid. For those that can’t make the later date, your tickets are fully refundable. Just email us through the ticket site. And for those that hadn’t purchased tickets already, there are some now available…

Now in its fourth year, the Los Angeles Bacon Festival is back this May for a pork filled affair at LA Center Studios in DTLA.

Scheduled for Sunday, May 1 the festival will feature dozens of restaurants and bakeries, all paying homage to the fatty flavor of bacon, presented in both sweet and savory dishes.

Your ticket gets you a plethora of bacon themed samples, signature dishes, all the beer you can drink from over 20 breweries and access to a custom photo booth.

Choose from two timed event options (noon – 3:00pm and 4:00pm – 7:00pm) the three hour bacon party has limited tickets and might sell out, so grab them sooner than later. 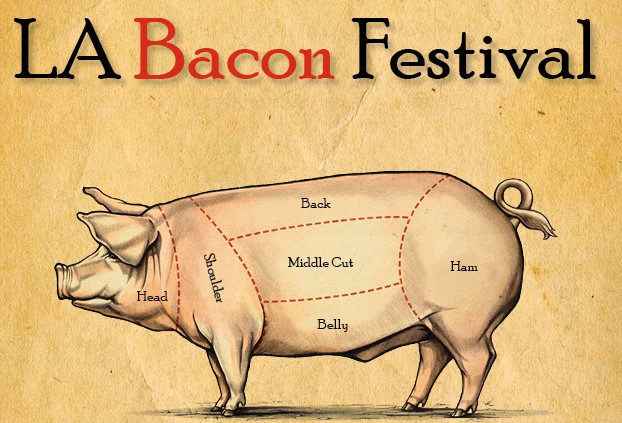