There’s a Massive Month-Long Food Fest Coming to L.A. This May

Hey Los Angeles foodies, it’s time to clear your schedule for the entire month of May! A massive 31-day food festival showcasing the diversity and deliciousness of the city of angels is headed our way, and you won’t want to miss it.

The event is called the Food Bowl and it sounds like it’s going to be one epic affair.

Created and organized by the L.A. Times, the Food Bowl will highlight inventive local kitchens from dining rooms and farmers markets to pop-ups and even dining on buses. A major highlight of the festival will be a Night Market held at Grand Park in Downtown featuring 50 restaurants and food trucks, drinks and entertainment, all taking place over five dates from May 10 through 14. 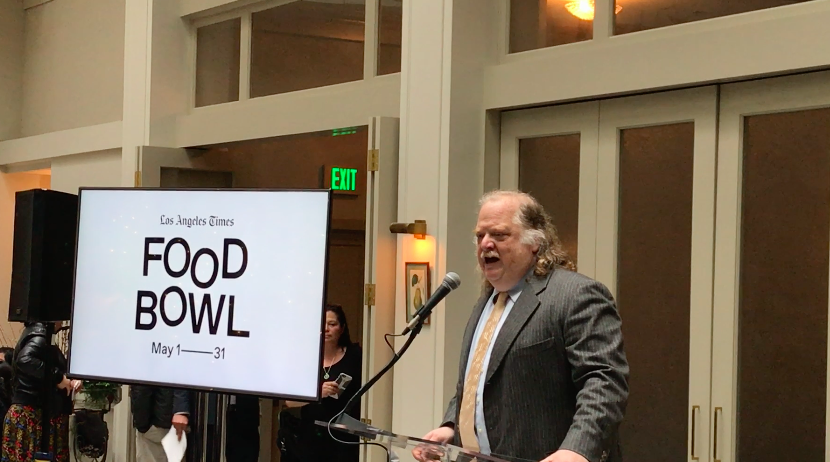 Jonathan Gold speaking at the Food Bowl announcement on February 7, 2017. Photo by Brian Champlin / We Like L.A.

Star international chefs slated to appear at Food Bowl events will include Massimo Bottura of Osteria Francescana in Italy, Fergus Henderson of St. John in London, Rosio Sánchez of Hija de Sánchez in Copenhagen and more for one-of-a-kind dining experiences exclusive to the festival.

All told, the Food Bowl is expected to schedule over 100 events throughout the month of May. And yeah, that kind of sounds like a crazy number to us too, but if there’s any city in the world that can sustain a food series of this magnitude for 4-plus weeks, it has to be L.A.

At the announcement ceremony for the event held yesterday inside Spring in Downtown, Gold cited the creativity of the chefs, purveyors, and farmers of our region as the key to making Los Angeles “the most exciting food city in the nation right now.”

As of writing of this post some of details are still a bit light (no official schedule yet), but the official event website is promising an additional release of information on February 11, so stay tuned!