Los Angeles Deputy Mayor of Economic Development Kelli Bernard is the Grand Marshal this year and 15th District Los Angeles City Councilman Joe Buscaino will take helm as Commodore of the Fleet with this year’s playful theme of Santa’s Minions.

There will be an estimated 60 participating vessels of all shapes and sizes, including powerboats, sailboats, tall ships, and harbor working crafts will parade along the LA Waterfront dressed up in their best holiday lights.

Officials and community leaders will participate in the parade as judges or passengers on the sparkling vessels and trophies will be awarded to the most dazzling entrants.

So stop by the beloved tradition. Fun (and free) for the entire family. 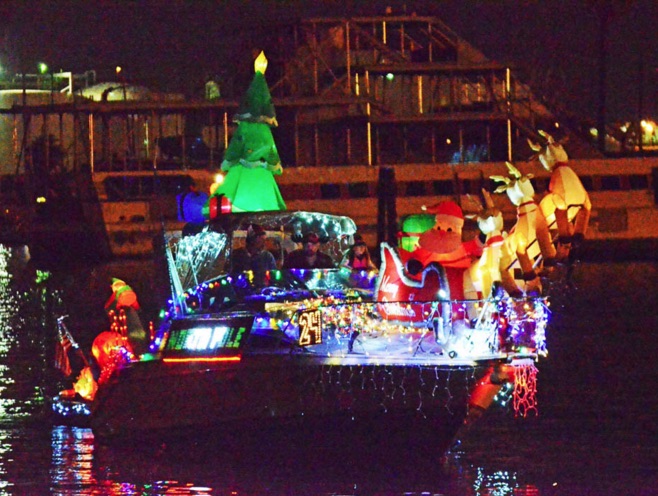 Sponsored by the Port of Los Angeles, the Los Angeles Harbor Holiday Afloat Parade will start in the East Basin near Banning’s Landing Community Center in Wilmington. Vessels will take approximately 90 minutes to cover the entire parade route through the Los Angeles Main Channel.

Spectators can view the parade from several points along the LA Waterfront, including:

Before the parade at 4:00pm patrons are invited to attend a holiday party at Banning’s Landing Community Center in Wilmington.

During the parade, at 6:00pm, the Port of Los Angeles will host a special Holidays by the Sea event at Downtown Harbor in San Pedro.

Home viewers can watch the parade in the comfort of their own homes by tuning into Los Angeles CityView Channel 35. For air times, visit www.lacityview.org.

If you wish to enter your boat in the parade the deadline for entires is December 2; register online at laharborholidayafloat.org.