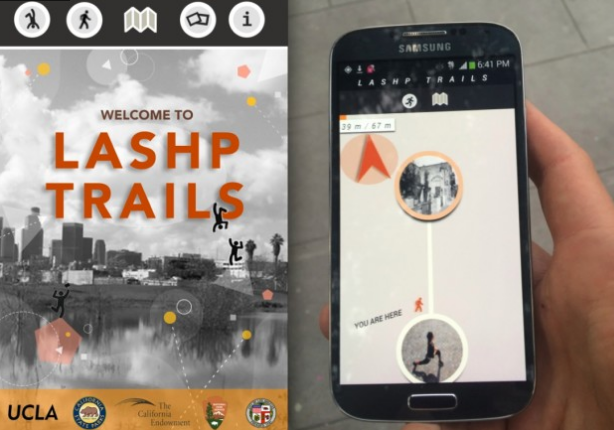 If you didn’t think walking was cool in Los Angeles, then you’ve got another thing coming to you.

L.A. is set to unveil an app that will help urban trekkers get the most out of their pedestrian adventures in the city of Angels by offering unique guidance, information, and suggestions. They’re calling it an “interactive interpretive” urban trail system. Ummm… ok, so what does that mean?

Well Alissa Walker over at Gizmodo got to experience the app first hand during a trial walk with Mayor Garcetti and the developers behind the app,  IMLab, this past Sunday.  Starting from El Pueblo de Los Angeles Historic Monument, the mayor and company took a 3/4 mile stroll over to the Los Angeles State Historic Park. From Walkers account:

“As we walked, the app directed me to various hotspots which I easily navigated toward using directional arrows and mileage counters. Once I stepped into the hotspot, I was able to see images and information about historical or cultural landmarks—like photos of the city’s first Chinatown, which was moved from its location to make way for construction of Union Station.” [full story at Gizmodo]

Walker likens the app to a key that can “unlock the content” of the urban space you might be walking in. The only stipulation? You have to be in the physical location to get at the content (hello: incentive). Whether it’s pointing out landmarks, offering guidance to hidden trails, or helping you explore hidden fitness opportunities.

Set to launch in April.