The Music Center is Hosting FREE Weekly Dance Parties in DTLA Every Friday All Summer Long!

Looking for the perfect place to get your boogie on this summer in Los Angeles?

The Music Center in downtown has you covered.

Now in their 12th annual season, The Music Center’s Dance DTLA program promise a weekly FREE excuse to get your butt on to the dance floor and bust some new moves all summer long.

Similar to how things went down last year, for 2016 Dance DTLA will be split into two distinct, alternating weekly series, taking place every Friday for a full thirteen weeks starting on June 2.

The first series is called Dance Downtown, which will offer an open air dance floor with beginner dance lessons taught by top Los Angeles dance instructors alongside a live band or DJ. The event will provide a great excuse to learn some new dance moves in a 100% judgment free zone.

The second series, which will run every other week, is called DJ Nights. The DJ series will be, in the words of The Music Center, “curated by influential artists and tastemakers who will give voice to the dynamic, vibrant LA culture through music, dancing, arts and aesthetics.”

Both series are open to all ages and will also feature beverages and small bites for purchase. 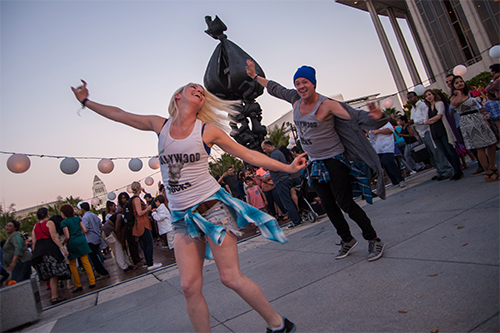 The 2016 lineup for Dance DTLA kicks off with a Bollywood night on June 2 and concludes on Sept. 2 with a disco themed evening.

Check out the promo video embedded below (produced by The Music Center for a previous year’s event) to get a bit more flavor of what you might expect.

Full schedule of 2016 dates and themes listed after the jump.