The art revolution in Downtown continues, this time with the announcement of a brand new museum focused on art from the city of Los Angeles.

The Main Museum, which is scheduled to open some time in 2020, will be located in the Old Bank District taking up 40,000 square feet of exhibition space on the ground floors of the Hellman Building and the Farmers and Merchants Building and will include a rooftop sculpture garden, according to the L.A. Times.

Unlike most museums, which, like L.A.’s newest, The Broad, rely on a private collection, the Main Museum’s curatorial focus will be on culling local resources. 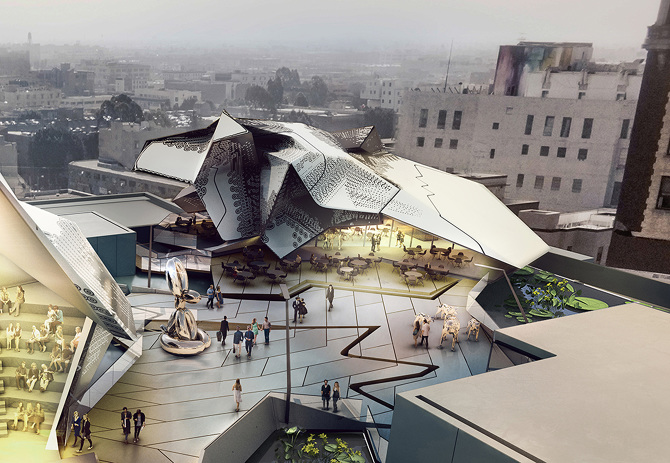 Rendering of The Main Museum. Image via Tom Wiscombe

“Considering the environment of Los Angeles, I think we are better off using our resources doing things other than buying stuff. Residencies will be at the core of our program, rather than a collection,” said curator Allison Agsten, who previously served as the curator of public engagement at the Hammer Museum.

The museum is launching “Beta Main” starting Oct.30, a series of informal public programs that’ll take place at storefront spaces that have been completed. The 10-day event staged by Los Angeles artists Suzanne Lacy and Andrea Bowers is a follow-up to their NYC performance at the Drawing Center in 2014 where Bowers taught Lacy how to draw.

The L.A. event will be the opposite with Lacy teaching Bowers the ways of a performance artist and will culminate on Nov. 8 (election day) with a special program.

There will be other public offerings including “Office Hours” where  artists based in the neighborhood can visit so that Agsten can get to know them and their work. There are also plans for an exhibition of the work of Boyle Heights photographer Star Montana. 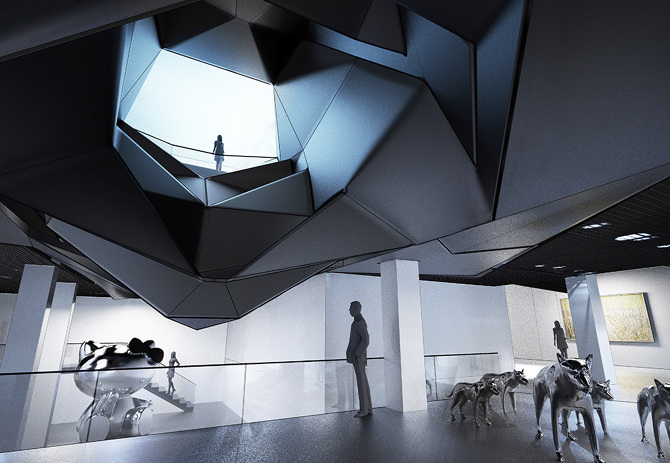 Interior rendering of the Main Museum. Image via Tom Wiscombe

Construction of The Main Museum is estimated to cost $55 million, according to Curbed LA, with L.A. architect Tom Wiscombe helming the design.

Along with artistic renderings of the plans for the museum, Wiscombe’s website describes the new project as a “a three-dimensional space” where “Objects penetrate through floors, peek over rooftops, and inhabit dark interior voids.”

Renovations of the ground floor space- the first of five phases of  developing the museum-  is scheduled for completion by 2018 but Agsten plans pop-up events throughout the building phases.