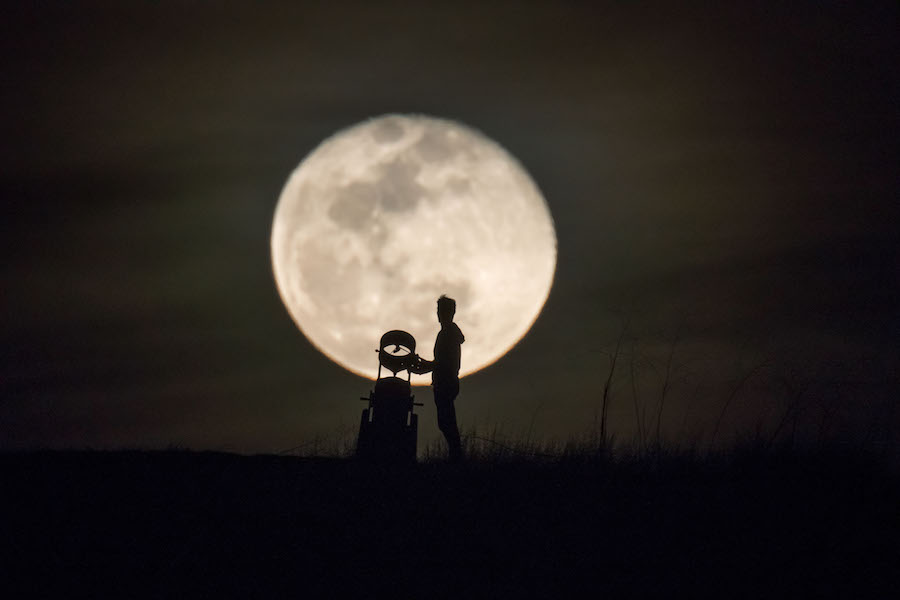 Production still from A New View of the Moon. Photo by Alex Gorosh

In a city of stars sometimes it’s easy to take what’s in the sky for granted. But filmmakers Alex Gorosh and Wylie Overstreet are on mission to make sure we never forget to look up. Through their YouTube channel To Scale: the pair examines the astonishing scale of the universe. Their latest video, titled A New View of the Moon, shows us reactions from Los Angeles locals gazing through a telescope at an up-close picture of the moon’s surface.

For the video Gorosh and Overstreet wheeled a Skywatcher 12″ Dobsonian reflecting telescope (about the size of R2-D2) to numerous well-known L.A. locations, then let random passersby stop in for a look. The telescope, used in conjunction with a 13mm Televue Ethos eyepiece, provided viewers with a 110-degree apparent field of view.

Overstreet appears as host while Gorosh films the encounters and the subsequent reactions. The premise is simple but the result, appropriately soundtracked by Clair de Lune, is powerful (watch below), with many of the viewers in shock and awe of the beauty before their eyes.

“When Wylie first told me the idea, it sounded almost too simple and straightforward. I had no idea how compelling the reactions would be from people,” Gorosh told We Like L.A. over email earlier today. “We made sure to shoot in places around the city that were not only iconic locations but also very diverse, socially and economically. It was amazing to see that regardless of our backgrounds, we all revert to little kids when faced with something so grand and awe-inspiring.”

The newest video was shot in bits in pieces over the course of about 18 months. Gorosh said the ultimate goal was to turn this project into a television show. So far their channel (which only has four posted videos) has received more than 4 million views, with a video on the scale of the solar system amassing the majority of those views.

For their next project the duo will focus on the scale of time, and specifically the age of the earth. No matter where they take it from here, the ability to spark imaginations and share a love of science with others seems to be a clear motivating factor.

“The space/science enthusiasts were obviously delighted but what I really loved were the people who didn’t think it was going to be very cool and then they were blown away.” Gorosh said. “People that literally couldn’t believe their eyes.”