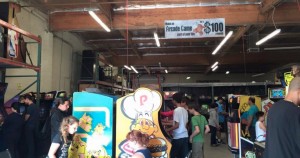 Don't miss out on another freeplay Saturday! We're here till four, so come play some games!