In a review of Das Bunker by the LA Weekly in 2011, Linar Lecaro opened by saying: “Industrial kids are a committed bunch, and we’re not just talking about the fashion: painful colored contacts, scalp-stretching cyber-dreads or 8 inch high stacks that make some of ’em tread like Herman Munster on the dance floor (though these looks are ominous and impressive).”

This Friday that commitment takes aim on another passionate sub-culture: Star Wars.

Das Bunker Awakens promises a unique mashup of industrial DJs and costumed Star Wars enthusiasts getting their groove on and celebrating the awakening of a brand new force.

Here’s what you can expect at tomorrow’s party: 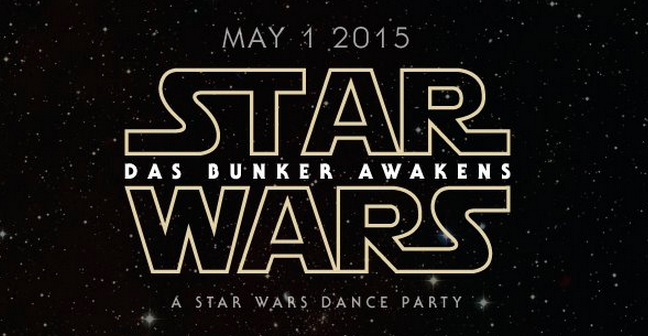 Some advance tickets still being sold for $15. They’re $20 at the door.

Oh, and if you need some extra incentive to get geeked, here’s the Force Awakens trailer just because…