This week’s tasty bites is all about awesome dads (like mine!)

Father’s Day is this Sunday, June 18, and if you still need reservations for the occasion then don’t panic. We have you covered with the best Father’s Day specials in Los Angeles.

If dad happens to love craft brews, this week is also L.A. Beer Week and there will be plenty of beer-centric events happening around town, capped off by a festival over the weekend.

Speaking of the weekend, this Friday-Sunday sees the return of KTOWN Night Market, Tacolandia, LA Wine Fest and the debut of a new dessert festival called Dessert Goals.

Treat Dad to an unforgettable Father’s Day, available at ALL Ocean Prime locations, with select locations offering brunch. Visit our link in the bio for more information. #OceanPrimeCMR #OceanPrime #FathersDay

1. If dad loves pizza, start Father’s Day weekend off with Mickey’s Italian Deli in Hermosa Beach. They’ll be offering a two for one deal on Friday June 16.

2. Nick + Stef’s Steakhouse in Downtown Los Angeles will offer the ultimate steak and local beer pairing by Executive Chef Megan Logan and Golden Road Brewery. On the special menu is a 24 ounce bone in Rib Eye served with Golden Road Brewery Wolf Mother (Specialty Release Triple IPA) and a choice of one classic steakhouse side for $79.

3. Le Petit Paris will host a traditional brunch style buffet with a premium meat carving station; oyster and shrimp on ice, truffled scrambled eggs, charcuterie, imported cheeses, a dessert table and more. make it a wet brunch with bottomless Mimosas or Bloody Marys! The brunch cost $59 for adults $59 and $29 for children.

4. The Standing Room in Hermosa Beach just got a new La Caja China smoker and they’re gonna take it for a spin on Father’s Day cooking up smoked ribs, steaks, and more! All dads will receive a free beer on Sunday with any food order.

5. Primo Italia in Torrance is introducing a limited time Italian specialty, fit for one of a kind dad. The La Bistecca alla Fiorentina, a 44 oz. cut of beef is sourced from a young virgin female Chianina cow bred in the hills of Tuscany. Renowned for its tenderness and flavor the steak is aged to perfection for 15/16 months. Only offered for the week leading up to Father’s Day and the day itself, the steak will be available for $140, served alongside the choice of Lou’s Old fashioned or a house Negroni!

8. Let dad enjoy a surf and turf this Sunday at Ocean Prime in Beverly Hills. They’ll be offering a decadent 14 oz Prime New York Strip Steak topped with butter-poached lobster gratin with garlic, lemon and Parmesan aioli with a house-made Cabernet jus for $64.

☀️☀️IT'S HOT OUTSIDE! ☀️☀️Sit in the shade and cool down with milk tea and juice from @cocofreshteaandjuice 😎 at KTOWN NIGHT MARKET on June 16/17! #ktownnightmarket2017 Tickets in bio! 🎟️🎟️🎟️

Sweet Rose Creamery in Studio City is bringing back its FREE summer movie series. Movies screen once a month during June, July and August, starting on Tuesday June 13 with a presentation of The Breakfast Club.

The Cooper Design Space will be taken over on June 17 by some of the best sweets vendors like Coolhaus, AmazeBowls, Milk Jar Cookies, Honey & Butter, The Pudding Truck and Gotta Have S’more. Dessert Goals is also bringing some of the tastiest desserts from NYC exclusively and for the first time: Ring Dings from The Ring Ding Bar by Chopped champion pastry chef Madeline Lanciani, and Cakies (aka “artisanal Twinkies”) from Jae NYC Eats.

Los Angeles Beer Week (June 17-25) is back! Now in its ninth year the week will feature dozens of beer-centric events over nine days in numerous locations all over the Southland. The event kickoffs this Saturday at Los Angeles Center Studios in Downtown L.A. with a festival featuring 150+ unique beers from over 75 craft breweries, along with live entertainment, great food and more.

L.A. Weekly’s 5th annual taco festival is back for 2017. Taking place at El Pueblo de Los Angeles on June 17, Tacolandia offers some of the finest gourmet tacos from over 120 curated vendors. The fest features a cash bar with beer, wine and cocktails, plus live mariachi music, food awards and more.

It's the last day to take advantage of the 2 for 1 ticket deals for the 12th annual LAWineFest! Our link is in the bio. Don't miss out! #lawinefest #wine #losangeles #dtla #craftbeer #MothersDay

The 12th Annual LAWineFest is returns June 17-18 for two afternoons of unlimited wine tastings. Happening at The Row in Downtown L.A., this event will introduce a wide variety of wineries and artisan brands,  as well as breweries both local and national. 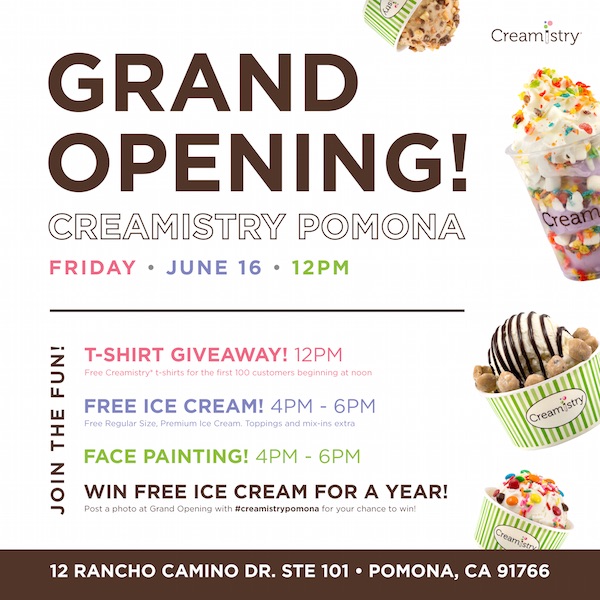 Creamistry opens in Pomona this Friday. To celebrate they’ll be serving free made-to-order liquid nitrogen ice cream, as well as handing out prizes and offering face painting for kids. Get your freebies from 4 to 6 p.m.