Where to Eat on 4th of July, Hello Kitty Ice Cream & other Tasty Tuesday News Bites

This week we gear up for America’s birthday with a rundown of awesome food things to do starting today and continuing through the weekend.

Tops on list: Afters Ice Cream collaboration with Sanrio launching this Thursday, a Red, White and BBQ bash presented by Time Out L.A. on Saturday and a Rooftop Fourth of July Celebration at DTLA’s WP24 by Wolfgang Puck on the 4th.

Also of note this week is a super rare beer festival, the Culver City Centennial Westside Food & Wine Festival and much more. 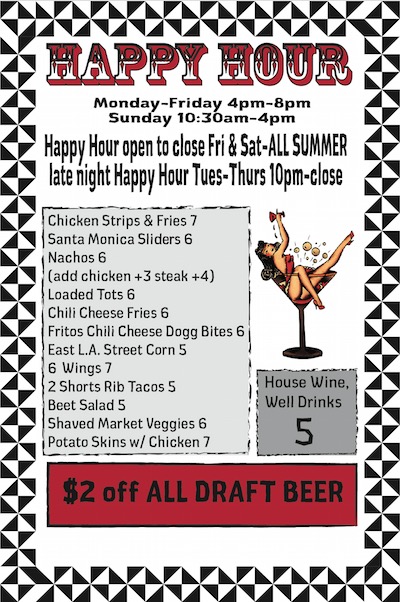 Need a new summer happy hour hang out? Busby’s West in Santa Monica has happy hour every single day with appetizers starting at $5, $2 off all draft beers and $5 house wine and well drinks.  If you’re not familiar with Busby’s it’s more than a bar, it’s an adult playhouse with a wide selections of arcade games, shuffle board and beer pong.

BLVD Kitchen (BLVD Kitchen) turns one this Wednesday and will celebrate with an Open House with complimentary food, drinks, demos, prizes and more. The Sherman Oaks spot is a retail shop, commercial kitchen offering cooking classes, and an event space all wrapped up into one.

Forman’s Whiskey Tavern in Toluca Lake will be hosting “Whiskey Wednesdays” every week from 9 p.m. until close. The bar will feature two specialty whiskey cocktails at a discounted price, as well as whiskey flight tastings.

Pasadena restaurant The Raymond 1886 teams up with Woodford Reserve, for a special food and bourbon pairing. Woodford Reserve Distillery is one of the oldest working distilleries in the U.S. and is designated a National Historic Landmark. The evening will consist of a special presentation of the Woodford Reserve Portfolio, followed by a tasting and a three-course dinner menu. Tickets are $90 per person.

Get a taste of three different French Rosé wines, along with Parisian inspired tapas during Pitchoun! Bakery Wine Tasting Night.

Beer Fest for Beer Geeks presents The Rarest Experience an outdoor festival featuring 30 extremely rare beers collected and cellared by Stout Burgers & Beers in Hollywood. Beer lovers are in for a real treat, many of these beers are not available for purchase in the U.S. Confirmed breweries include Firestone Walker, High Water Brewing, Dogfish Head Brewery, Jolly Pumpkin Beer, Het Anker, Tahoe Mountain Brewing, and many more.

Grand Opening of Dry River Brewing’s tasting room in Boyle Heights has arrived! A ticketed ($15) celebration on Saturday and Sunday, each guest will receive two beers, with the option to buy additional pours. The party is broken down into 90 minute sessions.

The Culver City Centennial Westside Food & Wine Festival returns to the Courtyard by Marriott Los Angeles Westside in Culver City for a day of tastings from Culver City, Mar Vista, Venice, and West Los Angeles restaurants, along with wines and spirits. Participating eateries include Mayura Indian Restaurant,Wildcraft, Hanjip, LA Gastronomy and more. Proceeds from the festival will benefit the Backpacks for Kids program.

Where to Eat on 4th of July

WP24 by Wolfgang Puck is throwing a Rooftop Fourth of July Celebration with a barbecue, and panoramic view of surrounding fireworks including the Grand Park celebration! Guests will dine from several stations featuring items such as Spicy & Sweet Baby Back Ribs, Pulled Kurobuta Pork Shoulder, BBQ Glazed Grilled Jidori Chicken, and a selection of gourmet sausages. The meal ends on a sweet note with picnic-style desserts and s’mores macarons. Cocktails include frosé, beer, wine, and more. Tickets cost $49 per person.

The Castaway in Burbank is hosting a Red, White & Boom Party on their impressive patio with panoramic views of the greater Los Angeles area. Guests will enjoy a BBQ buffet spread featuring burgers, hot dogs, ribs, tri tip, shrimp cocktail and more. Tickets cost $65 for adults and $30 for kids.

Astro Doughnuts & Fried Chicken releases a special treat for the 4th of July. The USA Doughnut will be available for one day only for $3.10