This week, from Monday February 1 to Friday February 5, features a free pizza giveaway, free after-hours dancing at The Music Center, first Fridays at NHM, a Peanuts Art Gallery, All Space Considered at The Observatory, and plenty more to choose from. 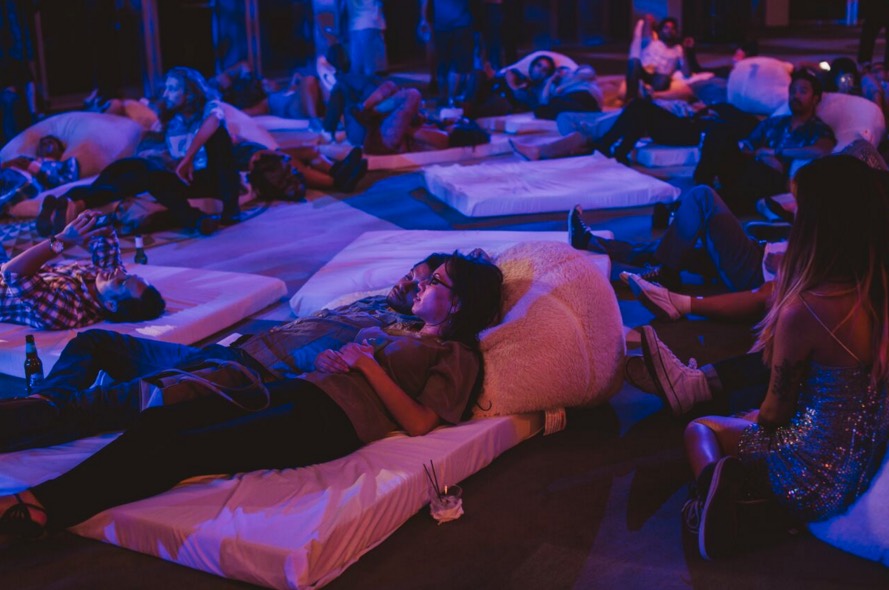 La Dolce Vita, in Beverly Hills, is turning 50! The restaurant is set to kick off a month long celebration with nightly $50 prix-fixe dinners featuring signature dishes from the original 1966 menu. Each meal includes a glass of Chianti to cheers!

Salt & Straw, the small-batch ice cream purveyor known for its artisanal, chef-driven approach to the American classic, will be offering an “LA Chocolatiers” series all month in honor of Valentine’s Day. Head Ice Cream Maker Tyler Malek collaborated with five of his favorite local chocolate makers to craft the decadent lineup, which highlights each of their unique styles, ingredients, and techniques via ice cream. Ice cream is available by the scoop or by the pint. For more information, visit saltandstraw.com/flavors/#la.

Starting Monday, The Federal Bar in North Hollywood will present LIVE BAND KARAOKE! Every Monday night starting at 9:00pm, guests will have the chance to belt out their favorite hits while taking advantage of the $5 drink specials and The Federal Bar’s special poutine menu. No cover!

This smash hit straight from London’s West End, makes’s it’s U.S. debut at The Broad Stage in Santa Monica. See George Orwell’s novel come to life through radical staging that blurs the line between the past and present and what’s fiction and reality. Keep in mind our friends at Goldstar have some discount ticketing options for select performance including this week while supplies last.

Step into the world of Cirque du Soleil’s KURIOS a place of wonders where your imagination can alter reality. Interested? Get more information and discount tickets on select days this week via Goldstar!

Come into Hollywood Burger and get a free order of tots with every burger or sandwich purchase!

10. Free Day At The Page Museum

Kidspace Children’s Museum is free from 4:00pm to close.

13. Larry Bell. From the 60s an Opening Reception at Hauser & Wirth

Larry Bell. From the 60s, is Hauser & Wirth’s first exhibition devoted to Larry Bell the artist recognized internationally for his innovative contributions to the Light and Space movement and New York Minimalism in the sixties. The opening reception will take place this Wednesday at Hauser & Wirth’s East 69th street gallery and the exhibit will be on view through April 9, 2016.

A deadly virus has swept the earth and a team of scientists (played by you and other folks!) are in an underground laboratory trying to find a cure. Each move becomes crucial to finding an antidote OR if you’re unlucky accidentally setting off the computerized decontamination system, where you might find yourself smashed flat by the slowly constricting laboratory walls. Sounds like your kind of mission? Come down to the Six01 Studio in Burbank and check out one of Los Angeles’ most exciting and immersive escape room utilizing digital technology and virtual reality to create a totally realistic experience. Get more information and discount tickets via Goldstar.

16. The Great Pizza Giveaway at The Pizza Press Pasadena

Here’s your chance to get our hands on a free pie this Thursday. To celebrate the grand opening of The Pizza Press Pasadena location all diners who register online for a voucher will receive a free personal 10-inch pizza, redeemable for either a custom or signature pizza of their choice. View more information and how to sign up here.

17. The Unauthorized Musical Parody of The Devil Wears Prada

A favorite tale of a basic-to-fierce transformation of a fashion magazine assistant is retold in this hilarious musical. There will be plenty of cattiness, back-stabbing and of course makeover magic. All happening at The Rockwell where you can grab a bite and have a cocktail during the show (girls night anyone?) There are only a few discount tickets on Goldstar left, better grab yours soon for this week’s performances.

Established in 1992, The Pan African Film Festival (PAFF) is a non-profit dedicated to racial tolerance through the exhibition of film, art and creative expression. This year’s L.A. festival opening night will screen American Is Still The Place, and the 11 days to follow will feature hundreds of new films plus numerous special events and panels.

The Andaz in West Hollywood will unveil a photography exhibition and music benefit titled “GRAMMY’S MusiCares: A Look Back.” Honoring MusiCares’ 2016 Person of the Year, Lionel Richie, the public reception will kick off the 58th annual GRAMMY celebrations and give visitors an intimate look back at MusiCares’ most rocking Persons of the Year including Stevie Wonder, Neil Young, Paul McCartney, and more. The opening reception is free to the public and take’s place from 7:00pm – 9:00pm in the Mezzanine. Complimentary hors d’oeuvres and wine will be served and there will be a special live DJ set during the reception.

Every day the Kings play a home game fans can dine on the “Puck & Play” menu ($40) a special three-course menu, offered at Nest at WP24 inside The Ritz-Carlton. Selections of dim such as Chili “Dan Dan” Dumplings and Pork Belly Bao Buns, are followed by Crispy General Tso’s Chicken and Thai Curry Noodles. Guests also leave with their choice of sweet treats like carmel corn packaged to go for the game. Check out Goldstar for more information and discount tickets to Kings games for the remainder of the year and 2016.

24. Throwback Thursdays Screening of The Legend of Drunken Master

25. ThinkCure Benefit Show at The Improv

Matt Knudsen, Brody Stevens, Henry Phillips, Jamie Kaler and Brendon Walsh are putting on a show for a great cause. In addition to a great night of family friendly (18+) comedy, there will an amazing raffle with prizes including: tickets to the Dodgers Luxury Box, a David Letterman crew jacket, autographed memorabilia from Warner Brother’s Bugs Bunny and a whole lot more. 100% of the proceeds from the night will go to Think Cure which provides funding and support for City of Hope.

27. Sleepless: The Music Center After Hours

On Friday, the Music Center’s after-hours party series returns for 2016 better than ever. It’s called Sleepless and it will feature a huge list of fun activities happening in multiple spaces filled with live DJs, music performances, video installations, sonic sculptures and more. Guest will party until the wee hours of the morning (well, 3:00am at least). Oh yeah, and did I mention it was free and open to the public? Yup, pretty cool.

This four hour tour of the sites and taste of what Hollywood has to offer will take you to The Roosevelt Hollywood to the iconic Capital Records and even Melrose avenue. You will make several stops at some of Los Angeles’ most talked-about restaurants for a variety of savory and sweet tastings. Get more information and discounted tickets via Goldstar. Bon appetit!

29. First Fridays are Back at the Natural History Museum

Party at The Natural History Museum after-hours during First Fridays! The first series will kick off with guided tours, scientist led discussions, a DJ Lounge and musical performances by up and coming bands. Each series has a specific theme and this week it’s “BIG SCREEN, BIGGER SCIENCE.”

From the same team who brought us the 626 Night Market, the Taste of Night Market is a ticketed tasting event that will feature food and drink samples from Southern California Chefs, visual artists, live musicians and cultural performers. The Chinese New Year themed event will take place at the Barker Hangar in Santa Monica on February 5 and 6.

33. Free Day At The Pasadena Museum Of Art

The Pasadena Museum of California Art has free admission for 12:00pm – 5:00pm this Friday.

36. Screening of Sicario followed by Q&A with Cinematographer Roger Deakins

Vidiots Foundation is proud to present an evening with Academy Award-nominated cinematographer Roger Deakins, along with a screening of Sicario, on Friday at 7:00pm. Grab your tickets on the Vidiots site.

37. Free Museum Day at The Long Beach Museum Of Art

Come check out over 100 artists from around the global interpret the classic characters of the Peanuts Gang in a way you’ve never seen before. Burning Buns food truck will be there and complimentary refreshments will be served. The opening reception starts at 8:00pm.

39. Free Night At The Norton Simon

The Norton Simon Museum has free admission the first Friday of every month from 5:00pm to close.

From Berlin to LA is a two-day event taking place across several LA venues and will showcase the growing bond between electronic musicians in Berlin and LA. All events are free to the public. RSVP to events, workshops, shows and after parties here.

An art walk, dining and shopping experience where participating businesses in the Long Beach neighborhood of Bixby Knolls businesses unite to promote local artists and musicians through extended operating hours. Fun for all-ages… and free! Regularly scheduled at 6:30pm-9:30pm on Fridays.