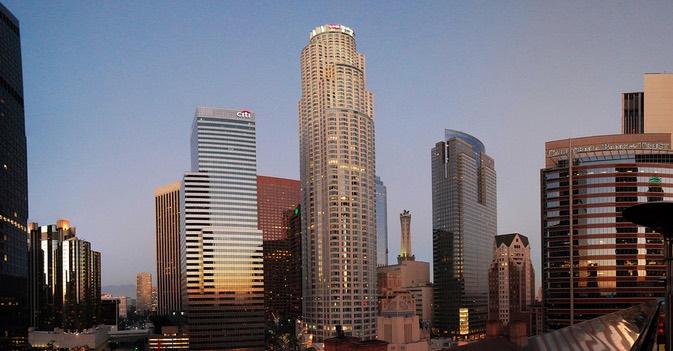 From 7pm to 12am Spin Standard inside of The Standard in Downtown Los Angeles will host a open ping pong tournament. For just $10 you get unlimited table time and an entry into the singles tournament.

French illustrator of children books and Los Angeles resident Godeleine de Rosamel is known for her whimsical clay characters. Giant Robot 2 will be hosting an opening reception for her solo exhibition of Life Forms with the artist in attendance at 6:30 p.m.

3. A Week of French-Language Cinema in Los Angeles

To celebrate their 75th anniversary Dairy Queen will be offering a free cone to every customer who visits on Monday.

Raise a pint and pinch the nearest person who’s not wearing green down at the Pig ‘n Whistle on Hollywood Boulevard. Live DJ and plenty of drink specials on Jamison and Guinness all day. Get more information and discount tickets to The Irish themed party via Goldstar.

REMINDER: For a full list of St. Patrick’s Day idea in Los Angeles, check out this list we made.

Get a taste of Old Hollywood sip on classic cocktails as an awesome guide share history tidbits, celebrity stories and more on Urban Adventures tour of Historic Hollywood. Goldstar is hooking people up with discount tickets!

All a board the Queen Mary in Long Beach for Shamrock ‘n’ Roll! Rock out to two stages of Irish Celtic rock, party tunes and more. Down green beer, nosh on Irish food and compete to win prizes on board the legendary cruise liner. We found half price tickets via Goldstar!

Celebrate St. Patricks Day laughing your ass off with some of your favorite comedians at The Laugh Factory. Down some Guinness and try to refrain from calling someone a Leprechaun, the comedians will surely get to it.

10. Hidden Hollywood Tour: The Inside Scoop on Tinseltown

Want to know about hush hush hangouts, neat hiking trails, hidden celebrity homes and beautiful parks frequented by tinsel towns finest? Will come one board the Urban Adventures tour “The Inside Scoop on Tinseltown.” This is not a tourist trap but an education of what makes Los Angeles so freaking cool. Goldstar has discount tickets for this week and it’s going fast!

From 4pm to close Pink Taco’s Century City and Sunset Boulevard locations is having a $3 blowout deal. Taco’s, beers and margaritas are.. you guessed it $3!

Looking to put some natural ‘green’ in your St. Patrick’s Day? Both the L.A. Arboretum and the South Coast Botanical Garden are free on the third Tuesday of the month. For more info, check out the complete list of free museum / garden days in Los Angeles.

The Ahmanson Theater will host the Tony Award winning musical Cinderella by composing legends Rodgers and Hammerstein. Watch their hilarious and magically romantic take on the story played out on stage. Goldstar has discount tickets to the event!

Dance to the most awesomely spun tunes this month at Sound Nightclub. When Felix da Housecat takes over you never know what’s gonna be playing from big disco to new wave he has a way of making classic tunes sound brand new. The kick off to his new residency at the club and ticket prices can be found on their website.

16. The Barber of Seville

How about a little opera with a comic twist? In this tale of young love a Spanish count enlists the help of the town barber to help win his object affection, with results that are both unintended and hilarious. If nothing else, great excuse to check out the Dorothy Chanlder Pavilion in downtown if you’re never been. Get more information and discount tickets via Goldstar

Gretchen Rubin is an author of several N.Y. Times bestsellers on the subjects of habits, happiness, and human nature. In this thought provoking talk on Thursday at Bergamont Station in Santa Monica, Rubin will discuss the keys to creating good habits, and thereby, a happier and more fulfilling life. Get tickets via Eventbrite.

Photographer / filmmaker Pete McBride has spent more than two decades traveling to some 70 countries capturing the world’s greatest rivers. This live talk, presented by National Geographic, focuses on two of McBride’s adventures, a trek down the famed Colorado River and an exploration of the Ganges in India. Starts at 730pm at the Broad Stage at Santa Monica College this Thursday.

19. Cinderella At The El Capitan

To celebrate Disney’s new Cinderella movie The El Capitan will host a live action event with special guests, film props, a light show and more as you wait for the curtain to go up. For fans of Frozen, Disney will also be showing a short Frozen Fever for attendees. This is an event for fairy tale lovers and romantics alike. Get more information and discounted tickets for the weeks screenings via Goldstar (as of writing of this article, tickets still available for Friday March 20th).

Can’t wait for October to roll around so you celebrate the Bavarian tradition of Oktoberfest? Well, they’re putting together a smaller scale version of an Oktoberfest with the same song, dance, food, and beer… only it’s in the middle of March! $8 at the door, and free to get in if you dress up in Bavarian costume.

21. A Morning Pep Rally With a Pro Skater

Come hang out at the Unique Space, drink some coffee, and listen to a talk by former professional skateboarder (and current owner of Pizzanista!) Salman Agah. Doors open at 730am, talk starts at 8am. Free to get in if you RSVP.

Great way to get your Friday morning started!

Go to MOCA this Friday to see the opening of a career retrospective of American artist Elaine Sturtevant (known by most simply as ‘Sturtevant’), who created a 50 year catalog of carefully inexact repetitions of some of the world’s most famous art works. The exhibition opens on the 20th and will run until July 27, 2015.

23. The Long Goodbye at Aero Theater

Raymond Chandler’s portrait of Los Angeles through the lens of detective Phillip Marlowe is captured perfectly in the 1973 Robert Altman film, which stars Elliott Gould as the iconic private eye. The screening will be hosted by the late director’s wife, Kathryn, and will begin at 7:30pm on Friday.