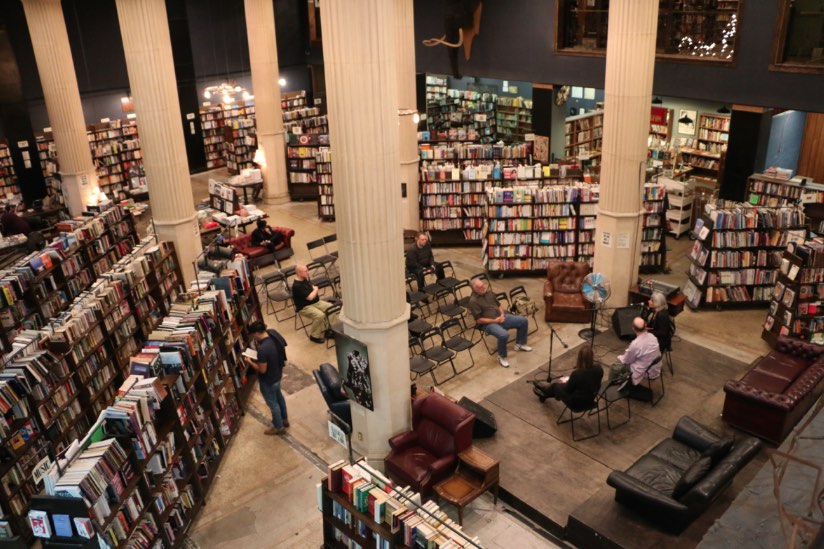 1. Come out to Angel City Brewery for a couple of beers and Drinky Draw (8-10 p.m.) where you try your hand at drawing a live model. Cost $20 to participate.

5. The Alchemist’s Lab is an escape room experience putting you right in the shoes of a junior detective at Scotland Yard in the 19th century. Do you have what it takes to uncover the devious plans of the alchemist? Happening throughout the week. DISCOUNTED (via Goldstar)

6. On the Lot in Los Feliz returns to the parking lot at Our Mother of Good Counsel Parish for a Monday-night array of gourmet food trucks from 5:00 p.m. to 8:30 p.m.

8. The Chamber Music Nights series at Walt Disney Concert Hall (March 28) is the perfect evening. Guests will have a chance to taste delicious wines, explore the iconic Frank Gehry architecture and indulge in some world-class chamber music.

9. Disney’s Beauty and the Beast will screen at the El Capitan Theatre with special pre-show activities including a light show, an all-new Beauty and the Beast overture arranged by Michael Kosarin and costumes, props and sets from the movie. Happening throughout the week. DISCOUNTED (via Goldstar)

10. The #1 show in Vegas history comes to L.A. LIVE for a limited engagement. Absinthe, the immersive variety show will feature comedy, burlesque, aerial and acrobatic acts. Happening throughout the week. DISCOUNTED (via Goldstar)

11. The Alternative Facts Comedy Show is hosted by the JB and Benny Blue Review and will have some of the best in comedy take the stage as well as Music by DJ Hydroe the proceeds will go to Amnesty International in support of Standing Rock. Tickets are just $10.

12. The Lincoln presents “For the Record,” a weekly series where guests bring in their own vinyl for a unique DJ set from 7 p.m. to 2 a.m. This week’s theme is Garage + Psych with DJ Jordan Blackmon (Toro y Moi guitarist). FREE

13. The 329 Day Carnival comes to Golden Road Brewery in Atwater Village celebrating California’s sunny weather –on average, we enjoy 329 days of sunshine per year. 329 Lager brewed on 3/29 and pints of 329 will sell for just $3.29 that day. There will also be awesome fair food, games, a photo booth, live music, face painting, specialty beer and yes, balloon animals. FREE

14. Does Art Capture Reality Better Than the News? Head to The Getty Center for an in-depth conversation with photographer and documentarian Jamel Shabazz and “The Wire” creator and journalist David Simon as part of Zocalo Public Square. FREE

15. Every Wednesday in March, Glendale Arts is offering FREE early-evening yoga classes in the forecourt of Glendale’s historic Alex Theatre. The classes are taught by Spiral Path Yoga Center. FREE

17. The Slurring Bee makes its way to The Virgil this Wednesday for a bar spelling bee where participants pay $5 to compete, take a first Slurring Bee Shot and spell. From there on it keeps going until a queen or king bee is crowned. Winner receives half the pot, bee-themed prizes and their picture immortalized on The Slurring Bees Wall of Fame, plus automatic placement in the Tournament of Champions!

19. On Wednesday,The Paley Center for Media in Beverly Hills will host a special advance screening and conversation with the cast and creative team of Prison Break.

20. YogaGlo will host a special yoga class to support Love Your Brain’s #mindfulmarch — the largest global fundraising initiative during brain injury awareness month this Thursday at their Santa Monica studio. Suggested donation is $21 and YogaGlo will match each donation. **editor’s note** this event was originally listed for Wed., March 29 but actually takes place on Thursday, Marc 30. Apologies for any confusion!

21. Experience the food and culture of East Hollywood’s ethnic neighborhoods through a four hour foodie tour this Thursday. DISCOUNTED (via Goldstar)

24. The Last Book Review returns to The Last Bookstore in Downtown Los Angeles. Join host Ever Mainard and five comedians as they tell their own personal, funny and often awkward story on stage. The last comedian will then take the audience through a book review. FREE

25. The Spirit Guild Distillery Tour and Tasting will educate attendees on how fruit and juice from California farms become bottles of gin, vodka, and other spirits. This hour-long, hands-on event includes a tour of the working craft distillery and a taste of the finished products. Tickets are just $10.

28. There is a public opening reception (7-10 p.m.) for a new series of artwork by painter Andru Sisson titled Black Privilege, at the Tappan Atelier this Friday. FREE

29. Second City Tours reveals the dark side of the famed Hollywood Boulevard. The walking tour, led by an informed guide will take you through ghostly crime scenes and spooky landmarks. DISCOUNTED (via Goldstar)