This week includes free cupcakes at Sprinkles, free cones at Ben & Jerry’s, free burgers for tax day (are you sensing a trend here?), a terrifying screening of The Exorcist and the Toyota Grand Prix of Long Beach (and even more!). 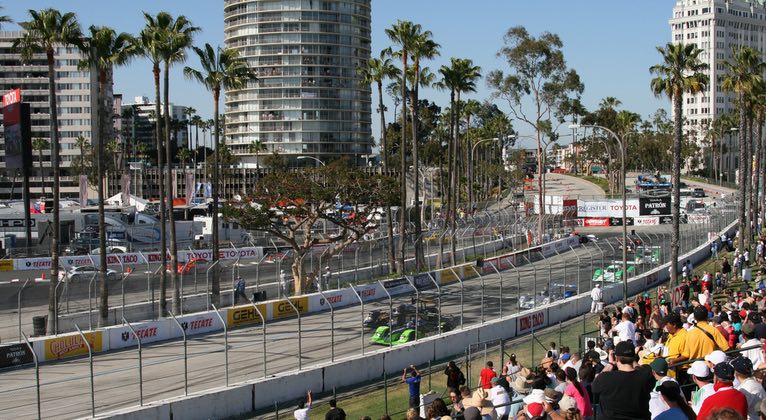 It’s hard to fathom that Sprinkles Cupcakes has been in business for almost a decade, but this Monday they’ll be celebrating their tenth anniversary. To reward loyal customers and to mark the occasion, Sprinkles has opted to give away one free cupcake to every customer who stops by on April 13.

Lovers of local design can shop a wide variety of indie brands. Market is open all week and runs through the weekend. For a full list of vendors check out their list here. For additional information visit their website.

4. Hot Tub With Kurt And Kristen

Going all the way back to 1979 (one year after they first opened) Ben & Jerry’s has marked their calendars with a day each year to give back to their loyal customers by offering every patron who enters the establishment that day a free cone of their favorite flavor. It is known as Free Cone Day, and this year the occasion falls on Tuesday, April 14.

On the second Tuesday of every month LACMA invites the public to visit the museum for free. Check out the public art displays too like Chris Burden’s permeant installation Urban Lights and more.

From March through May the lineup for Live Talks LA consist of writers, artists, performers, scientists and business leaders, who will give insight talks. This week T.C Boyle along with Susan Orlean hold court to discuss Boyle’s writing and his novel The Harder They Come.

8. Get The “Taylor Swift Experience”

The Grammy Museum is hosting a retrospective on the 25 year old songstress where never before seen photographs, home videos, hand written lyrics and more will be on display.

9. Provocations: The Architecture and Design of Heatherwick Studio

Expect to see some of today’s best working comedians alongside a few young up and comers at one of the best live comedy shows in Los Angeles, The Super Serous show! Although the lineup changes each month, the creators of the show Mandee and Joel of CleftClips try to consistently create a intimate and magical atmosphere to have a laugh. I recently asked them to describe the show in one word for our readers,”Wowza. Because we try to keep things interesting at The Super Serious show. Each host brings something different to the table and you never know who will stop by or literally come running onto the stage.” This week’s line up has T.J. Miller (Silicon Valley), Ian Karmel (Conan), a video by WOMEN (IFC Comedy Club) and more.

Villains Tavern in Downtown Los Angeles will pay the taxes on all drink bills! It’s their little way of sticking it to the man. They also have a kick ass Happy Hour double win!

12. Free Burgers At The Hard Rock With Bret Michaels

Poison fan? The Hard Rock Cafe on Hollywood Blvd is celebrating Tax Day with the help of rock n’ roll legend Bret Michaels. Guests will have a chance to take the cafe stage and “Sing For Their Supper.” Michaels will kick things off with a short performance and then open the stage for visitors to sing a song of their choosing (with a live band!) in front of the entire restaurant. Those that perform will end Tax Day on a high note with a free LOCAL LEGENDARY® “Hollywoodland” Burger.

13. Rock & Roll Billboards Of The Sunset Strip At The Skirball

Want an excuse to head down the Standard Hotel? Every Wednesday night Spin hosts a trivia night starting at 9pm where you can enjoy special prizes, cocktails, and ping pong!

Shepard Fairey releases his third installment of new album cover artwork at SUBLIMINAL PROJECTS. DJ Z-Trip will be joining Shepard Fairey on opening night for a special live performance. [UPDATE: This event was posted in error, it the Shepard Fariey release took place last April, 2015. We apologize for this error. The RVSP taken has been taken down].

See your favorite disney characters come to life on ice! Great for kids and Disney loving parents, the show has just about everyone, from Buzz Lightyear to Ariel to even the Car gang. Tickets are normally $28 but Goldstar has them for $21.

On Thursday’s The Skirball’s exhibitions are free to the public. Check out Noah’s Ark a interactive journey where you can climb on board the ark and check out the life sized animals made of up-cycle, repurposed materials!

22. ‘The Exorcist’ Screening at the Old Abandoned L.A. Zoo

Love the scary the stuff? Love outdoor movies? The Great Horror Campout will host a night time screening of The Exorcist at the abandoned home of the Old L.A. Zoo in the heart of Griffith park. You think this is just some campy horror film from the 1970’s? Well, let me put it subtilely… IT WILL TERRIFY YOU! Especially when being taken in accompanied by the slow descent of darkness as twilight fades at the park.

Disneynature’s new documentary Monkey Kingdom follows the journey of Maya a monkey from Sri Lanka as she leads her family to reclaim their home at Castle Rock previously taken over by a monkey tribe. Narrated by Tina Fey Monkey Kingdom features a variety of characters from leopards to mongoosesand is directed by the team behind Disneynature’s Chimpanzee. Moviegoers will get to enjoy a real-life animal adventure while at the El Capitan, the Wildlife Learning Center will host a pre-screening showcase featuring exotic animals from around the world, live on stage. Tickets are normally $13 but Goldstar has them for just $8!

24. For the Record: Dear John Hughes

Friday through Saturday Hudson will hold a warehouse sale big enough to satisfy any denim addict. We hear denim is priced around $40-$60 a pair. Cash and credit, no large bags allowed and the location is 5900 Triumph St. in Commerce.

L.A. County’s largest street race  is back for it’s 41st year! The Toyota Grand Prix of Long Beach will take place from April 17-19 with car showcases, a celebrity race, music, food, and of course the featured IndyCar event getting underway around 1:30pm on Sunday afternoon in downtown Long Beach. Grab tickets via Goldstar starting at just $17 for a Friday all-day pass and a three-day pass for $46.