This week includes sample sales (like all week!), classic movie screenings, free day at the L.A. Arboretum, an Avengers themed art show, and plenty more to choose from. 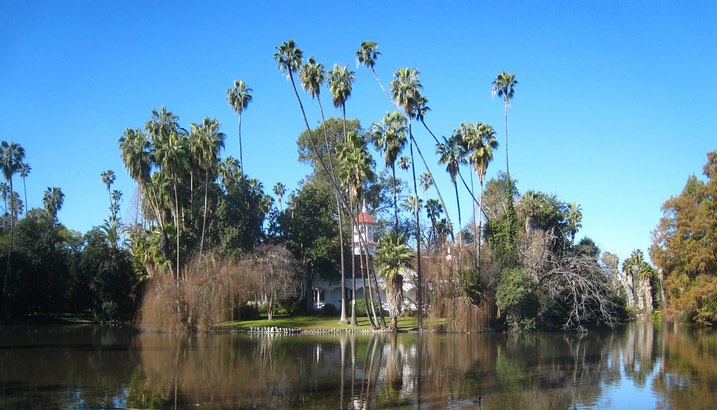 The Rebecca Minkoff semi-annual sale is happening in Hollywood for A WEEK LONG! From Monday the 2oth through Sunday the 26th you can get your hands on goodies up to 70% off. Expect shoes, clothes and of course her famous bags on sale.

The Monday blues got you down? Have some sake on Katsuya! Increase your sake knowledge with a complementary tasting before dinner is served at all Katsuya locations. Local experts from Tyku, Rock Sake, Dassai and Kikisui will be hosting.

3. Kitson Warehouse Sale
Save 40-80% off on women’s, mens and kids apparel, shoes and accessories at the week long Kitson warehouse sale happening from 10am-7pm, find trendy brands like Boy London, Groceries, Rachel Zoe, House of Harlow, Brian Lichtenberg and more. The sale is a week long so your last chance is on Friday the 24th. Located at 1124 N Citrus Ave., Los Angeles 90038 the sale accepts cash and credit cards.

On the third Tuesday of every month, admission is free at The Los Angeles County Arboretum. The arboretum boasts 127 acres of greenery, plus upwards of 200 species of birds, and a variety of specialized reserves with an aquatic garden, a tropical green house, an herb garden, and a rose garden.

The Ace Hotel is hosting a Coachella chill off night with Ladyhawke, Gavin Turek, Mereki & MJ Maelstrom spinning tunes all evening. The music starts at 8:30 pm.

Tuesday through Sunday is BritWeek! The celebration of all things British including a Sunday roast and even a street fair in Santa Monica.

Keeping up with BritWeek The Improvised Shakespeare Company is performing at The Largo Coronet. Faux British accents and improv is taken to Elizabethan level with this super popular Chicago show.

Elvis fan? The LACMA film series is screening a matinee of the 1965 film Girl Happy. The story is about a Chicago mobster who hires a rock-and-roll singer and his band to keep an eye on his daughter during spring break in Fort Lauderdale, Florida.

Disneynature’s new documentary Monkey Kingdom follows the journey of Maya a monkey from Sri Lanka as she leads her family to reclaim their home at Castle Rock previously taken over by a monkey tribe. Narrated by Tina Fey Monkey Kingdom features a variety of characters from leopards to mongoosesand is directed by the team behind Disneynature’s Chimpanzee. Moviegoers will get to enjoy a real-life animal adventure while at the El Capitan, the Wildlife Learning Center will host a pre-screening showcase featuring exotic animals from around the world, live on stage. Tickets are normally $13 but Goldstar has them for just $8!

10. Screening Of The Cremaster Cycle At The Hammer

Cult film epic The Cremaster Cycle by sculptor and performance artist Matthew Barney will be screened at The Hammer. The series is being screened in conjunction with the West Coast premiere of River of Fundament: A Film by Matthew Barney & Jonathan Bepler at UCLA’s Royce Hall on Saturday.

11. Rock & Roll Billboards Of The Sunset Strip At The Skirball

April 22nd is designated as Earth Day, and here’s some fun ways you can celebrate the occasion in Los Angeles:

14. A Screening of The Postman Always Rings Twice (1946)
Check out a screening of this classic noir thriller at the Alex Theater in Glendale with a special introduction by Alan K. Rode, director of the Film Noir Foundation. Show starts at 730pm on Thursday. Get tickets and more information from our friends at Goldstar.

15. Sole Society Headquarters Pop Up Sale
Sole Society will host a pop up sale at their Los Angeles Headquarters. Staffed by the Sole Society corporate office, the sale will include current styles from Spring 2015 with an exclusive discount on footwear, handbags and accessories. Sale is from 12:00 pm to 6:30 pm and you must RSVP to get in. Insider tip Sole Society sample shoes are a jaw dropping $10 at the sale if you are a size 6 or 9 you can snag their sample shoes!

Most well known for his punk rock album cover art, the Black Flag logo was designed by Pettibon and so was Sonic Youths Goo album. Regen Projects will open his show From my bumbling attempt to write a disastrous musical, these illustrations muyst suffice an exhibition of new work by the artist.

Every Thursday evening from 5pm-8 pm admission is free to both the MOCA on Grand and The Geffen Contemporary.

“Revealed” is open to the public exclusively at Sofitel Los Angeles at Beverly Hills. The grandson of Pablo Picasso and the author of “Picasso, Portrait Intime” (Albin Michael/ Arte editions) curated this exhibit, hand selecting the 30 photographs from the collection of Paris Match, the famous French weekly magazine. This compelling photo exhibit takes an intimate look at the world’s greatest modern artists at work as they reveal themselves to the photographer.

This musical takes all the sexy, funny and memorable moments from the original movie, mashes them up with a soundtrack of top-40 hits from the 90s and then performs it all live onstage with a powerhouse cast and live band. With three sold-out preview performances last month this show is sure to be a hot ticket item. This Friday’s performance starts at 8pm. Find discount tickets via our friends at Goldstar.

This Marvel inspired art exhibition will be held at the Hero Complex in Los Angeles and includes exclusive artwork from nearly 100 artists, including originals, sculptures, mega-metals, and more, all inspired by the newest installment of Marvel’s film franchise. Opening reception is this Friday at 7pm.

The Los Angeles Modernism Show kicks off Friday with an opening night party. Check out our city’s most prominent artists, designers, architects, and other influential professionals from the creative community.

The Fashion Industries Guild will be donating 100% of the proceeds to the Department of Pediatrics at Cedars-Sinai Medical Center. This awesome sale will be held at the Cooper Building on the mezzanine floor. Sale starts Friday (9am-4pm) and ends Saturday (10am-3pm.)

26. For the Record: Dear John Hughes

28. Disney On Ice: Worlds of Fantasy

See your favorite disney characters come to life on ice! Great for kids and Disney loving parents, the show has just about everyone, from Buzz Lightyear to Ariel to even the Car gang. Tickets are normally $28 but Goldstar has them for as low as $13.