This weekend includes a Big Lebowski Fest, the LA Marathon, the final weekend of PaleyFest, and a drive-in screening of Airplane! (and that’s  just for starters). So grab some friends or go at it alone, but most importantly have fun and enjoy yourself! 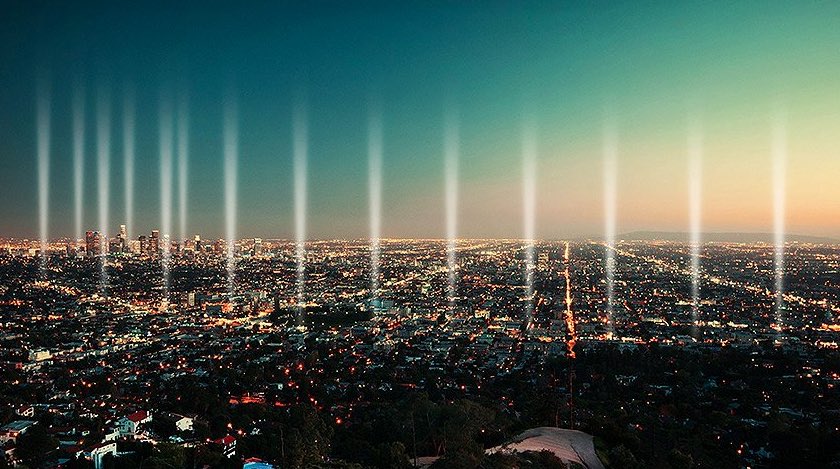 129 spotlights will illuminate the sky to mark the course of the LA Marathon this weekend. Rendering via ASICS.

The final weekend off the 2015 PaleyFest kicks off with a farewell bid to Lea Michelle, Chord Overstreet, Amber Riley and the cast of Glee. You can catch a panel discussion from the cast / creators of Arrow and The Flash on Saturday, then on Sunday at 4pm you can catch Gina Rodriguez and the cast of Jane The Virgin. The concluding panel will go on at 8pm on Sunday with Kathy Bates, Sarah Paulson, Michael Chiklis and others from the cast of American Horror Story: Freak Show. If you love T.V. and haven’t had a chance to catch a panel discussion yet, this is your last chance!

2. Cinderella At The El Capitan

To celebrate Disney’s new Cinderella movie The El Capitan will host a live action event with special guests, film props, a light show and more as you wait for the curtain to go up. For fans of Frozen, Disney will also be showing a short Frozen Fever for attendees. This is an event for fairy tale lovers and romantics alike. Get more information and discounted tickets for the weekend screenings via Goldstar.

It’s just, like, our opinion man but we think The Lebowski Fest LA sounds like a party worth attending. Things kick off Friday March 13th with a movie Party featuring the Kyle Gass Band and a screening of the original 35mm print of The Big Lebowski at Saban Theatre. The festivities continue Saturday with a bowling /costume party, trivia and other contests at Fountain Bowl. Mark it zero, dude!

5. The Friday Forty At NerdMelt

Dave Holmes and Scott Gimple is hosting their on going drinking game meets current affairs news- sketch comedy show at The NerdMelt Showroom. Performers gain some “liquid courage” before answering 40 questions about events from the last seven days. The show starts at 9 p.m. $8 in advance and $10 at the door.

Dan Savage is an American gay activist, author and media personalty who writes popular syndicated relationship and sex advice column Savage Love. After curating the HUMP! Film Festival in Seattle and Portland he is taking the show to Los Angeles. 18 films will be screened from animation to spoken word these films will have you laughing, wincing, closing your eyes at the sexual rainbow humanity has to offer. Get more information and discount tickets via Goldstar.

The Great Horror Campout will be holding a screening of Friday The 13th at the “haunted” Griffith Park Old Zoo. Expect to see some familiar monsters roaming the zoo with you. Tickets are $13 on their official website.

The city of Pasadena is having a lovely evening of art, music and entertainment free to the public! 15 cultural institution will open there doors including the Pasadena Conservatory of Music (playing music all night!) and the Pasadena Museum of California Art. Visit the official website of ArtNight Pasadena for the full list of participating venues.

The New Beverly Cinema is showing two classics on one billing: Dazed & Confused and Swingers. Tickets are $8 and there are two showings one on Friday and the other on Saturday as listed on their website.

The Electric Dusk Drive-In is L.A.’s only drive in open year round where you can watch a movie amidst a gorgeous view of downtown Los Angeles. This weekend you can catch a screening of the comedy classic Airplane! We found tickets as low as $3.50 via Goldstar if this sounds like your cup of tea.

Raise a pint and pinch the nearest person who’s not wearing green down at the Pig ‘n Whistle on Hollywood Boulevard. Live DJ and plenty of drink specials on Jamison and Guinness all day. The Irish themed party cost $10 to get in BUT we found tickets for just $5.

Way down in Orange County the city of Dana Point is hosting two weekends of festivities dedicated to the thousands of grey whales and their calves migrating back north while passing through their beach city. Opening day for The Festival of Whales is this weekend and patrons can expect a whale-themed concert, crafts, art and of course plenty of whale watching. Since your down there for the festival you could also go on your own whale watching excursion for as low as $15.

13. How Did This Get Made? Podcast At Largo!

Occasionally the hilarious podcast created by comedians Paul Scheer, Jason Mantzoukas and June Diane Raphael take their show on the road. This time Largo will host the trio as they dissect the worst movies ever made and tell you why they are in fact amazing. Tickets for How Did This Get Made? are $30 on the Largo official site.

Enjoy a midday art excursion! From noon to 5pm guests are welcome to explore art studios, watch art and ceramic demonstrations, participate in art and theater workshops while enjoying food and live music all under the Santa Monica air hangers. The Santa Monica Airport Artwalk is free to the public and most importantly the parking will be free as well!

In this second annual pub trivia event held at All-Star Lanes in Eagle Rock, fans of Star Wars, Game of Thrones, Sherlock, Lord of The Rings, and Harry Potter can test their knowledge against their fellow geeks while imbibing varying amounts of alcoholic beverages. Sound like your idea of an awesome Saturday night? Check out the event announcement for more information.

Great ocean-side views, drink specials, and live entertainment will help you do an early St. Patrick’s Day celebration in style at Whiskey Red’s in Marina Del Rey. Tickets are $10 presale and $15 at the door. Make sure to dress in your greenest greens!

Saturday is your final chance to take advantage of extended happy hours and special food discounts at a collection of over two dozen Old Town Pasadena bars and restaurants. Check the Old Town website for the complete list of participating establishments and deals.

Every year thousands of L.A. runners converge for a 26.2 mile race that runs from Dodgers Stadium to Santa Monica. Want to know the best places to watch the marathon? Or where to eat and drink along the LA Marathon route?  Timeout has a super useful LA Marathon 2015 Guide for people training for the race and for the folks who wish to observe others losing calories as they bit into a burger.

19. Free Beer at The Rockefeller

The Rockefeller in Manhattan Beach is gearing up for March Madness by rewarding team spirit with FREE beer. Wear your team’s jersey during March Madness games (March 15 – April 6), and receive a free flight of beer with the purchase of an entrée.

20. The Farriers Package at Santa Anita

If the marathon isn’t your thing why not spend a day at the races with a package that includes admission to the races, box seating and a racing program, along with a pint of local craft beer from the Farriers bar. Get more info and discounted tickets via Goldstar.

Like the Santa Monica event we mentioned last week, this hybrid scavenger hunt / sightseeing tour is a brilliant way to spend your Sunday afternoon getting to know the city of angels. Starting at the Dave & Busters in Hollywood, participants form teams of two to eight people and make their way to different L.A. sites trying to solve puzzles and unlock the clues that will lead them to the next location. At the finish line you can enjoy drinks and snacks, and hang out with your fellow competitors. For more information and discount tickets to enter the race, check out Goldstar.

Have an event you’d like to suggest as a listing? Drop us a line via our contact page.

Remember, we respect the fact that you’re trusting us with your personal info and will never share your email information.