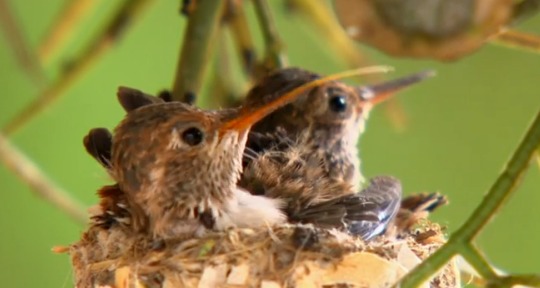 Everybody poops, right? Even hummingbirds, whose breakneck fast paced existence might seem to defy that most natural of biological acts. But wait, hold on, we’re getting ahead of ourselves. First, a bit of background.

Now, Tom Tanquary is a professional videographer living in Costa Mesa who happened to have the fortune to have hummingbird create a nest inside a plastic plant in his backyard.

By virtue of his profession and his interest, Tom set up a slow-motion camera and captured some amazing footage which was featured on the below episode of SoCal Connected.

The video shows the mama bird breaking down food, feeding her babies (which amazingly, takes place every 15 minutes!), and  then, of course there’s the money shot which is referenced in the title of the article.

(Unfortunately, the video is an embed from KCET and they’re using a flash player that won’t show up on some mobile devices. Boooo)