One of Los Angeles’ most beloved and quintessentially L.A. events has announced its new schedule of screenings for 2017, which begins on May 13.

Cinespia at Hollywood Forever Cemetery has been going strong for 15 years and this May’s schedule looks as enticing as ever, with a neo-noir, a Hitchcock thriller, and two great ‘90s movies — one a drama and one a comedy — on the slate.

Hollywood Forever is the final resting place (at least in spirit) for numerous luminaries of film and music, including both Johnny and Dee Dee Ramone, Judy Garland, Rudolph Valentino, and Toto from The Wizard Oz. It’s a great place to watch a classic film beneath the stars as you enjoy a picnic and the view of the numerous surrounding palm trees silhouetted against the night sky.

Check the full schedule of films announced (so far) below, which includes dates through May 28. More screenings will be announced in the months to follow, and we’ll be sure to update this post as needed with the latest lineup. 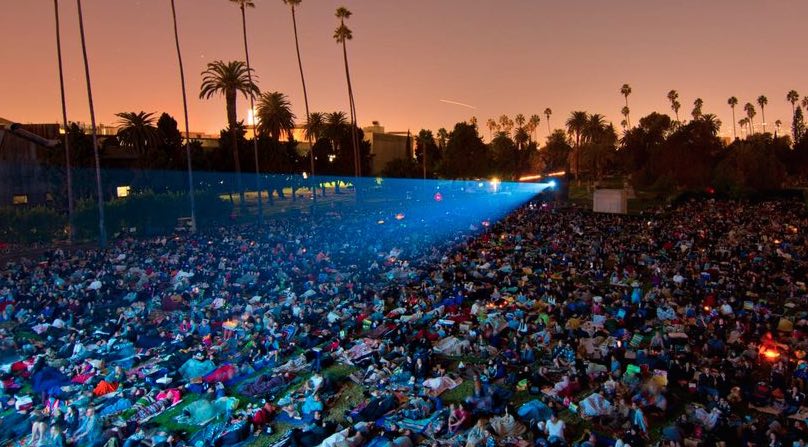 May 27: North by Northwest

Alfred Hitchcock’s classic 1959 thriller about a victim of mistaken identity being pursued by killers stars Cary Grant and Mount Rushmore.

This seriously hilarious 1995 movie about a teenage girl living in Beverly Hills has a fantastic soundtrack, great messages that are in no way preachy, and timeless themes. It also brought “as if!” to the mainstream.

Party on! It’s the 25th anniversary of Wayne’s World, one of the best comedies of the ’90s. The story of two slackers and their cable access TV show (remember those?) stars Mike Myers and Dana Carvey, with a supporting cast that includes Tia Carrere, Rob Lowe and Lara Flynn Boyle.

Judy Garland’s remains were recently moved from New York to Hollywood Forever. In honor of this momentous occasion, Hollywood Forever will have a remembrance ceremony for Garland and an unveiling of her new gravesite before this screening of the beloved classic.

Kevin Spacey became a star — and won an Oscar — for his co-starring role in this 1995 crime drama that currently ranks as the #26 movie of all time on IMDb.

Jennifer Lopez stars in this true story of the late Tejano singer Selena, who leapt to lame before she was murdered at the tender age of 23 by the president of her fan club.

July 8: A League of Their Own

The men are off fighting in World War II, and so the first all-female professional baseball team is born! A League of Their Own stars Madonna, Rosie O’Donnell and Geena Davis as some of the teammates, and Tom Hanks as the team’s drunken has-been coach.

In honor of the 20th anniversary of  The Fifth Element, director Luc Besson will be on hand to discuss this sci-film (starring Bruce Willis, Chris Tucker — in a role that was intended for but rejected by Prince — and Mila Jovovich) and share a preview of his upcoming film, The City of a Thousand Planets.

This 1986 cult classic stars River Phoenix, Jerry O’Connell and Corey Feldman. Set in 1959, it’s a coming-of-age tale about a group of 12-year-old friends that is moving, timeless and magical, and has a great soundtrack to boot.

This charmingly raunchy comedy stars Jonah Hill and Michael Cera as high-school students and best friends trying to get alcohol for a party and each lose their virginity before going off to college. Superbad also stars Seth Rogan and Emma Stone.

Rife with sword fights and witty repartee, Rob Reiner’s hilarious 1987 film is a romance, comedy, and adventure film all in one.

Settle in with pillows and blankets for a triple screening of late-’90s movies featuring the Coen Brothers brilliant, obsession-worthy comedy starring Jeff Bridges as The Dude; a midnight showing of Tamara Davis’ comedy about a trio of potheads, headed up by Dave Chappelle, who try to bust a friend out of jail; and Terry Gilliam’s Hunter S. Thompson adaptation starring Johnny Depp, Benicio Del Toro and a suitcase full of drugs. This slumber party goes on until 4:20 a.m.

Truly a comic masterpiece, Some Like it Hot stars Jack Lemmon and Tony Curtis as two murder witnesses on the run from the Mafia. Attired in drag to hide their true identities, the pair join an all-girl band headed up by Marilyn Monroe. Set in 1929, Billy Wilder’s Some Like it Hot is punctuated by what many consider to be THE best final line in film history.

The close friendship between two mainstream-rejecting girls, newly graduated from high school, diverges when one of the girls (played by Scarlett Johansson) becomes more conventional, while the other (Thora Birch) develops an unusual friendship with an obsessive collector of 78 rpm records (Steve Buscemi) two decades her senior.

“I am big! It’s the pictures that got small.” This 1950 film noir about a forgotten silent film star who enters into a romance with a much younger, mercenary screenwriter was nominated for 11 Academy Awards and won three, including Best Screenplay and Best Art Direction.

Starring Eddie Murphy, Arsenio Hall and James Earl Jones, Coming to America is a comedy about of a rich African prince who comes to the United States in search of a wife. Questlove will be on hand to spin before and after the film!

This season of Cinespia screenings at Hollywood Forever is being sponsored by Amazon Studios. For more information, visit cinespia.org.

Note that as more screening dates are announced we will be updating this post.