This week, from Monday, Apr. 10 to Friday, Apr. 14, features The Portals Project at Grand Park, The Encounter at The Wallis, the DTLA Art Walk, The Virtual Reality Expo, a Big Bunny Spring Fling at the LA Zoo, and LOTS more. 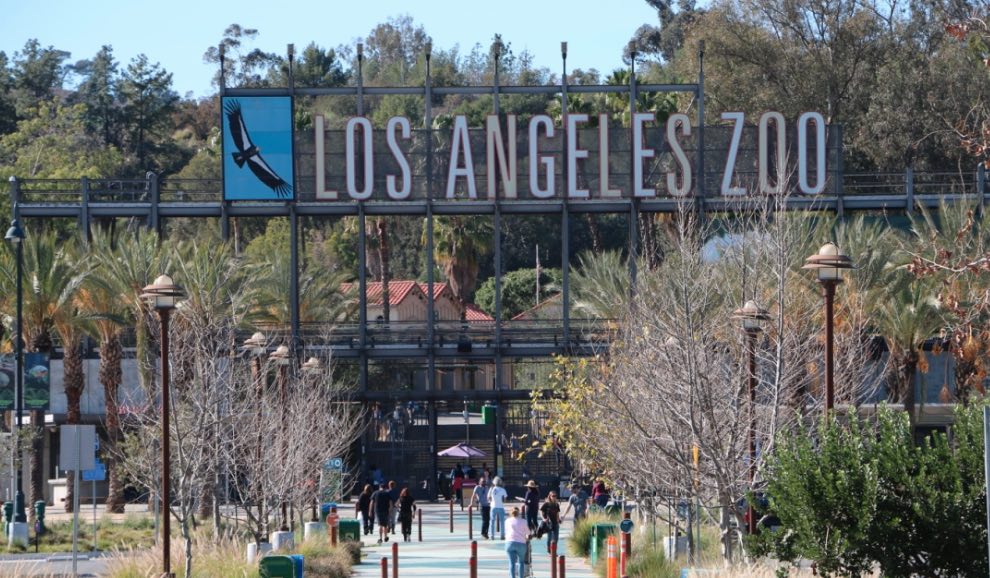 1. Grand Park is hosting a site specific installation called The Portals Project, an immersive experience where Angelenos get to connect and communicate to people around the global in real time from Amman, Berlin, Mexico City and more. Happening April 10-23. FREE

2. Spend a Night at the Aquarium of the Pacific and explore the aquarium after hours. DISCOUNTED (via Goldstar)

3. Monday is the 5-year anniversary of Write Club Los Angeles at The Bootleg Theater.

5. The Queen Mary introduces Ships & Giggles Comedy Night featuring some of the best comedians aboard the majestic ship. Happening every second Monday of each month the new comedy series will kick off in the Observation Bar with Rocco Stowe and friends.

6. The Business LA is a free comedy show at Little Joy featuring some of the best local comics in town. FREE

7. The Wallis presents the West Coast debut of The Encounter. Described as one of the most moving theatrical experiences staged on Broadway and London, Encounter follows the true story of National Geographic photographer Loren McIntyre as he finds himself lost in the Amazon. Combining excellent storytelling with 3D audio technology the show is directed and performed by Complicite’s Simon McBurney. Performances run April 6 through April 16. Check for discounted tickets on Goldstar while supplies last. DISCOUNTED (via Goldstar)

8. Play Indiana Jones for a day with Escape Room LA: The Cavern. Find clues and solve puzzles to get your hands on a lost civilization’s ancient treasures hundreds of feet below Downtown Los Angeles! DISCOUNTED (via Goldstar)

9. L.A. Urban Adventures invites you to relive Old Hollywood by taking a stroll down the Hollywood Walk of Fame while stopping to hear stories about historic spots, sample drinks made famous during the Golden Age and try out local street food. Happening Tuesday and Friday. DISCOUNTED (via Goldstar)

10. Escape Room LA: The Theatre has you trapped inside a creepy theater haunted by a ghost. The only way out is to uncover clues and puzzles to release the ghost before time runs out. DISCOUNTED (via Goldstar)

11. The Lincoln presents “For the Record,” a weekly series where guests bring in their own vinyl for a unique DJ set from 7 p.m. to 2 a.m. This week’s theme is Soul & Funk with DJ Jordan Blackmon (Toro y Moi guitarist). FREE

12. Free admission days this Tuesday for: Los Angeles County Museum of Art and Autry Museum of the American West.

13. Rapper Lupe Fiasco will take the stage at The Novo by Microsoft this Wednesday. DISCOUNTED (via Goldstar)

14. Ahmanson Theatre presents the much beloved Tony Award-winning Stephen Sondheim musical Into the Woods. The new rival of the classic will be performed by the acclaimed Fiasco Theater production. Happening throughout the week. DISCOUNTED (via Goldstar)

15. Desert Bazaar, a festival shopping event happening at the Standard, Hollywood will feature super cool fashion vendors, a beauty lounge, live music hosted by KCRW and food provided by Alma. **Correction: This post previously indicated The Standard Hotel Rooftop in Downtown Los Angeles as location for the Desert Bazaar. We apologize for the error**

16. The monthly Los Angeles Downtown Art Walk will be part of World Art Day. The evening of hosted projects will include exhibitions, pop-ups, artist talks, performances and site-specific installations in both private and public spaces. FREE

17. NHMLA & Angel City Brewery want to answer the question, “Can citizen science save the world?” A look at projects with a global reach and impact—from civic science and online crowd-sourcing to international citizen science fly research. FREE

19. Odd Nights heads to One Santa Fe in the DTLA Arts District for their signature outdoors shopping experience. There will also be a designated kids area, live music and a full bar. FREE

20. Throwback Thursdays at NoHo cinema screens The Natural this week. DISCOUNTED (via Goldstar)

23. Enjoy a free screening of a new episode of CNN’s Emmy-nominated show United Shades of America with W. Kamau Bell. The event takes place at the Bing Theater at LACMA, and Bell himself will be on hand for an enlightening conversation. FREE

24. Festival M.A.R.S., a ten-day festival featuring unique merging of music, fashion, art and dance, is coming to Downtown Los Angeles from April 14 to 23. Taking place at Art Share L.A. and Angel City Brewery, the fest will include performances from 35+ local and internationally established musicians and visual artists.

26. Tease, If You Please Burlesque Show staged at Globe Theatre spotlights acts from some of the most creative dancers in the business. DISCOUNTED (via Goldstar)

27. Trap’chella is two days of Trap partying. Get immersed in the vibes and culture of this music movement. Hosted by rapper PROBLEM!

28. Big Bunny’s Spring Fling at the Los Angeles Zoo is three days (April 14-16) of egg-citing fun! Take a photo with “Big Bunny”, join in a family dance party, learn about rabbits and more. The event is included in the admission ticket.

29. Thrones!, a hilarious musical parody of Game of Thrones is playing at The Hudson Theatre in Hollywood all weekend. DISCOUNTED (via Goldstar)