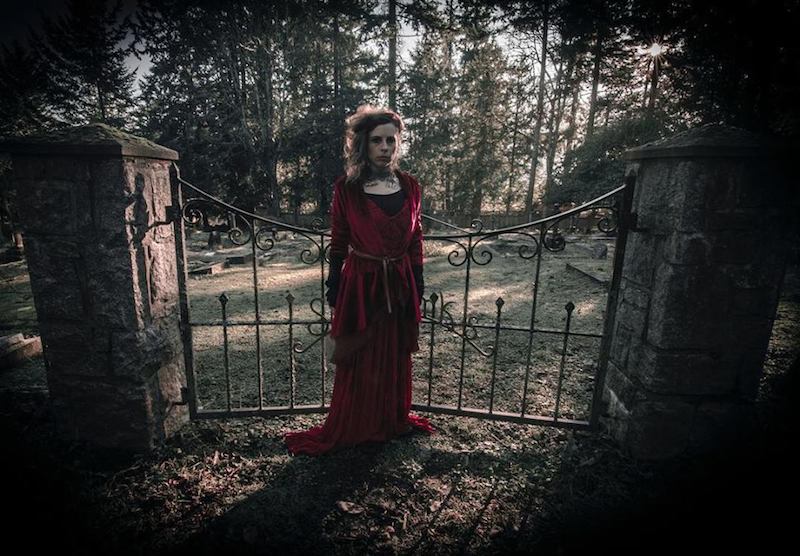 Cora is bored. Do you want to play Scrabble with her? Photo: The Count’s Den

If you’ve ever wanted to chill at Willy’s Place in Sunndydale or Fangtasia in Shreveport, then you’ll feel right at home at The Count’s Den. This new, members-only, vampire-themed lounge offers magic and mischief alongside casual game and craft nights—and yeah, you’ll be playing with the undead. These vampires won’t eat you, but they might request your presence in a dark ritual or two.

The Count’s Den comes via Rachel Foti, owner of escape room company Horror Escapes LA. Yet if you talk to Foti about the Den and its blood-sipping regulars, she’ll tell you she’s but their mortal liaison. She describes the Den as an “immersive theater lounge,” where guests can hang out with one another while simultaneously interacting with characters and following a continuous narrative. It’s sort of like being a tangential character in a supernatural soap opera.

The dark parlor—with its high ceilings, scarlet walls, and Victorian aesthetic—feels far removed from the streets of downtown L.A., despite being located just a 15-minute walk from the 7th Street/Metro Center Station. It’s only been open for a few months, yet feels like it’s been lurking there for years.

The eponymous Count was one of those Old World vampires, stuck in his ways faster than a Midwestern baby boomer arguing with his niece’s Facebook friends about minimum wage. However, after the Count mysteriously disappeared, a younger vampire named Cora took over as the nest’s leader.

“[Cora] is more New Age in her decision making and leading,” Foti said.

“It was as if I would stare into her eyes and I felt her demands come over me. I knew what I needed to do and then I knew nothing at all.” _Rachel #thecountsden #immersivetheatre #coven #membersonly #trust #vampire #vampirecounts #rituals #mindcontrol

Cora (played by Dana Benedict) has been known to suffer from an ailment common among immortals: ennui. To quench her boredom, she’s decided to open the once-clandestine spot to humans. Cora’s methods are fairly modern: she’s active online, and invites the living to parties and casual hangs. Some gatherings are members-only, though a curious mortal can get in by scoring an invite from an existing member to the Den’s weekly Thursday get-togethers or by attending a ticketed event. These might include parties, replete with burlesque shows and other performances, or the Den’s Remember Me series.

The Remember Me shows are interactive plays in which attendees will learn, firsthand, the origin stories of the vampires that frequent the Den. You see, the vampire Hakan (Anes Hasi) is Cora’s advisor and the most skilled of them all when it comes to magic arts.

“He feels it is important for the mortals to not judge the vampires in their dead lives, but to expose them to who the vampires were prior to death. Hakan hopes the mortals can find one vampire to relate to through their origin stories,” Foti said.

Guests to Remember Me will commune with Hakan, who will conduct a ritual that allows them to slip through space and time. Each chapter explores the past of a different vampire, including how and by whom they were sired.

I attended Remember Me: Germaine, which swept my group to 1980s New Orleans. At a punk show in a dingy basement club, we observed the vampire Germaine (Matt Vorce) in his human state and observed how the long-haired rocker became the vampire he is today. Following closely behind Hakan, who protected us with a mystical invisibility shield, we also saw how Cora herself fits into Germaine’s past. Future chapters will delve into the interlocking backstories of other characters, including Cora and Hakan.

While Germaine was about 30 minutes and accommodated five guests at a time, future stories will vary in audience size, length, ticket price, and location. Some will also include food/drink. After Germaine, for instance, we were allowed to mingle and enjoy some complimentary beer or wine, as poured by the surly vampire Ava. Dracula famously said (at least when he was played by Bela Lugosi in 1931 and then again by Gary Oldman in 1992), “I never drink…………….wine,” but we mortals sure can!

Remember Me shows and other ticketed events will be posted on The Den’s social media pages.

“We are currently developing an event calendar that will include events such as art, jewelry making, taxidermy workshops, vampire church, brunches, and more,” Foti said. “Since we are so new and only open for a few months, we are consistently in the process of growing.”

Those who become members of  The Count’s Den may also get to participate in an ongoing Augmented Reality Game (ARG) that Foti expects to continue for two years.

“The vampires have been known to contact members to go on scavenger hunts and run errands for them,” Foti said.

If playing Charades with the undead sounds like a good time, go ahead and check out The Count’s Den on Facebook or online here. If you’re interested in playing any of Horror Esacpes’ four games, check them out here. Of note, “Edmund’s Attic” is the newest room and part of The Count’s Den story. Ava has requested you break into the quarters of Edmund—an immortal, tongue-less servant to the vampires—and find the secrets hidden within.