Some flower blooms are kind of neat. Others are so rare the only way to describe them is downright super, especially when it comes to the barren landscape of Death Valley.

In the below YouTube video, produced by National Park Service in association with Death Valley Natural History Association, Park Ranger Alan Van Valkenburg highlights the rarity of the massive bloom events in Death Valley, and what we might be in store for over the coming weeks.

While blooms do occur in small nooks an crannies of Death Valley nearly every month of the year, a true ‘super bloom’ event takes very special conditions and usually occurs only once every decade or so.

And the result is like nothing you’ve ever seen before.

With the recent El Nino rainfalls, the stage is being set for a very special bloom, one that may be a once in a lifetime experience for most observers, but only if the conditions remain just right.

As is pointed out in this recent article for the National Parks Conversation Associate, a flash of freezing temps could kill sprouts or strong winds could dry them up, but optimism still abounds for a very super spring season.

Depending on the timing of the El Niño rains here (if and when they show), the bloom could last into April. At higher elevations of the park where the wildflowers have not yet begun to bloom, we could see a peak later in Spring.

In the below photo taken on February 20 by photographer Marc Cooper about 9 miles south of Badwater we can the bloom is already looking pretty spectacular. 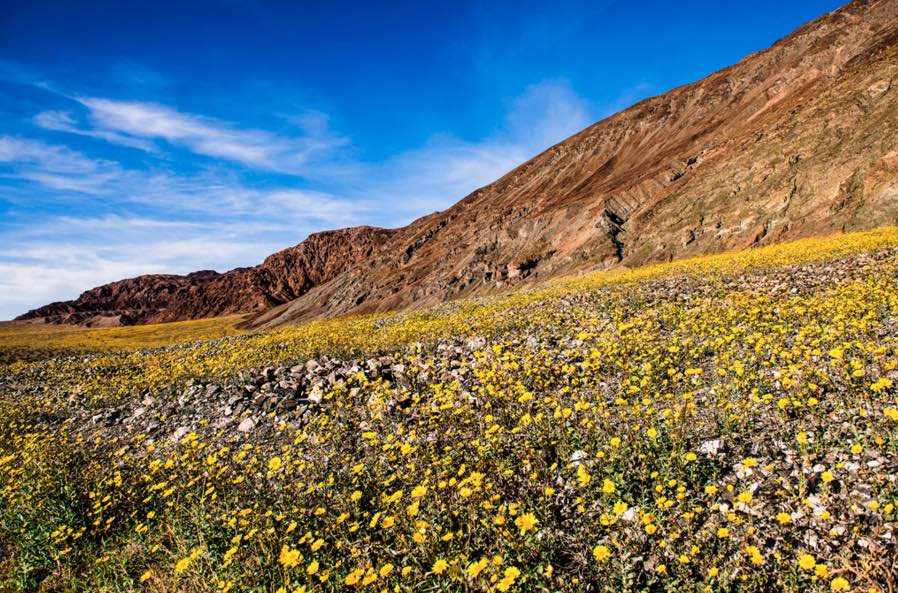 So are you ready to make the 4.5+ hour drive out to Death Valley to see the wildflowers?

According to the L.A. Times the best route to see the current blooms is via Highway 190 to Badwater Road, heading south, but watch out for a closure along Badwater Road from Ashford Mill to Shoshone.