If you haven’t yet visited Yayoi Kusama’s installation Infinity Mirrored Room – The Souls of Millions of Light Years Away at The Broad, you’ve almost certainly caught a glimpse of the glimmering art work (perhaps unwittingly) on a friend’s social media feed.

Since opening in Sep. 2015 the exhibit has been of The Broad’s biggest (perhaps star?) attractions, drawing droves of art aficionados and selfie seekers to check it out for themselves.

It should come as no surprise then that the the first hosted special exhibition at The Broad will also feature Kusama’s work.

[RELATED: The Broad’s Going to Be Jamming This Summer With a New After-Hours Music, Film & Performance Series] 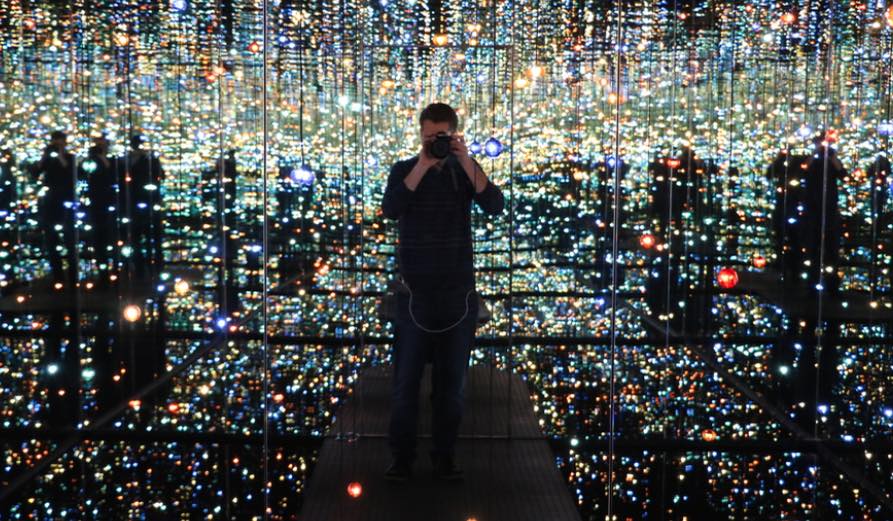 Yayoi Kusama: Infinity Mirrors will display six of the 87-year-old artist’s famous kaleidoscopic environments (aka Infinity Rooms) along with large-scale installations, paintings, sculptures and works on paper ranging from the 1950’s to present day.

The exhibition, which is being touted as the most significant North American tour of Kusama’s work in nearly two decades, will travel to four major museums in the United States and Canada, with part of that journey landing in Los Angeles at The Broad starting in Oct. 2017.

Among her works to be showcased during this tour will be several large-scale, vibrantly colored paintings along with the recently completed, All the Eternal Love I Have for the Pumpkins, 2016, which feature dozens of Kusama’s bright yellow, dotted pumpkins.

Joanne Heyler, founding director of The Broad, explained the goal of the exhibition via an museum press release, “The timing is right for an exhibition that contextualizes the infinity rooms and brings Kusama’s contributions to 20th and 21st century art into deeper focus. We are thrilled to present this unprecedented special exhibition at The Broad next year that engages seven decades of work by a phenomenal artist.”

Yayoi Kusama: Infinity Mirrors will be a paid special exhibition at The Broad, with purchase price including access to the rest of the museum’s exhibits.

Exact ticketing information and dates will be provided closer to the exhibition arrival.

Approximate dates for the exhibition in Los Angeles are Oct. 2017 through Jan. 2018.