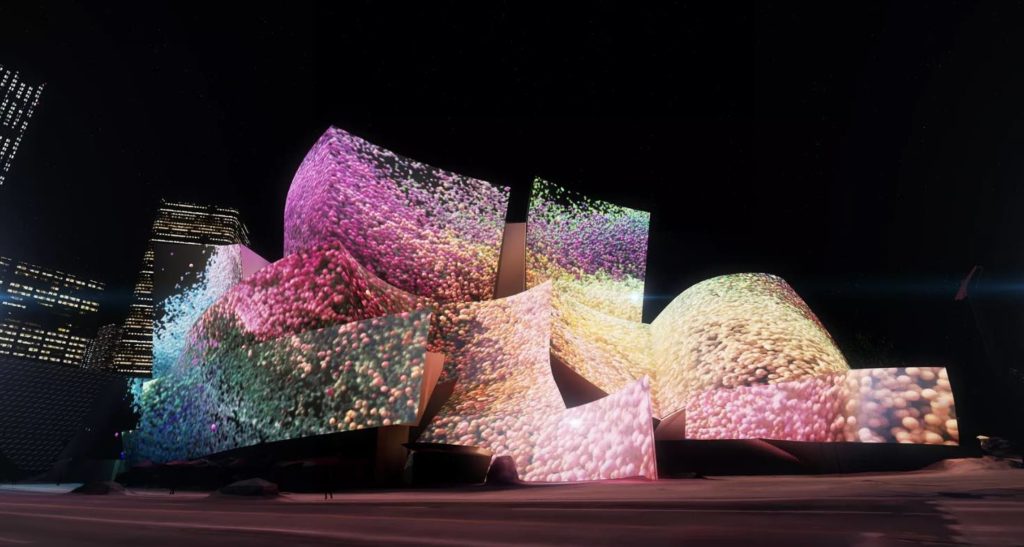 A Los Angeles icon is getting a bold new look – at least for the next week or so. This Friday a massive light installation will cover the Walt Disney Concert Hall as part of the Los Angeles Philharmonic’s centennial kickoff celebration.

WDCH Dreams is a collaboration between artist Refki Anadol and the LA Phil. To create the display Anadol dug through the orchestra’s digital archives (including video, audio, and images), then processed the data through Google Arts and Culture’s machine intelligence, which then turned the submittals into millions of data points that appear as colorful textures and patterns. This output is what will be projected on to the surface of the Concert Hall’s exterior.

45 terabytes of data are being used for the process, shown through 42 projectors placed carefully to cover the building’s surface. Anadol is using the dream-like installation to metaphorically display the collective consciousness of The LA Phil and The Walt Disney Concert Hall.

Visitors can catch the projections from September 28 to October 6. The display will restart every half hour beginning at 7:30, with the last 12 minute display beginning at 11:30 p.m.

The projections serve as a companion piece to an immersive installation inside the concert hall at the Ira Gershwin Gallery. The gallery space, which was also spearheaded by Anadol and his studio, will allow guests to interact with the archives and memories of the LA Phil dating back to 1919 – traveling across the music and history of the orchestra. The translated archives look extremely similar to the colorful and varied patterns projected outside the building, but attendees will be able to manipulate the data themselves.

WDCH Dreams leads into the LA Phil’s grand “Celebrate LA!” event this Sunday. The event will shut down eight miles of road from The Walt Disney Concert Hall all the way to The Hollywood Bowl for a massive street party featuring over 1800 dancers, musicians and artists performing along with food and vendors. There will also be a celebratory event at The Hollywood Bowl including a free concert featuring Katy Perry and Kali Uchis.

Refki Anadol has a career filled with similar beautiful installations inside (and outside) buildings across Los Angeles, New York, Istanbul, Berlin and San Francisco. It’s only fitting that Anadol comes into the picture in this way, as Frank Gehry designed The Walt Disney Concert Hall with the hope that one day concerts going on inside the building could be displayed on its exterior for outside visitors.