So I’m scrolling through my Facebook newsfeed when boom, a story pops up about an earthquake-proof bed that’s supposed to protect you from harm when the big one finally strikes.

Here’s how it works:

The idea is that when an earthquake hits a hinge mechanism is triggered that drops the mattress into the hollowed metal base of the bed and a secure lid closes over the top, entombing (and I use that word deliberately) the sleeper in a metal fortress designed to protect him/her from rubble falling from above.

Basically, an impenetrable coffin crossed with a mousetrap. 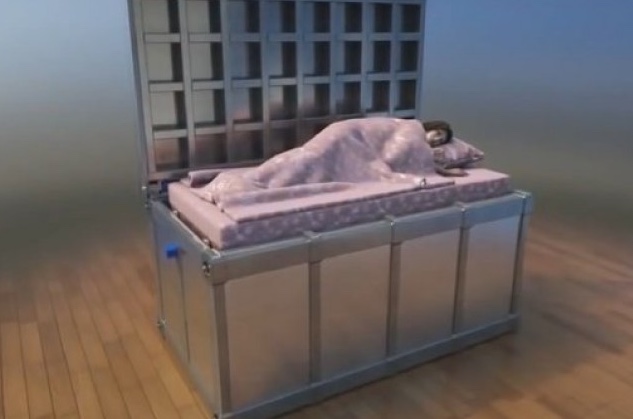 And yes, it’s every bit as terrifying as that description implies.

(watch video below for the full demo)

According to the Daily Mail, the earthquake bed concept is the brainchild of Chinese inventor Wang Wenxi, who was granted a patent for the initial quake-proof bed in 2010 and has since updated the designs.

Of course, there are just few lingering questions…

I mean, the visual of the food/water supply compartment is encouraging, but the lack of information about how a sleeper might access the supplies is unclear,  and the whole notion of exiting/escaping the enclosed bed is glossed over altogether.

Almost equally disturbing as the whole coffin swallowing the sleeper concept is the hilarious elevator music accompanying the video, which sounds like it was pulled directly off the soundtrack to Napoleon Dynamite.

In any case, I definitely will not be using this as part of my earthquake preparedness system for when the big one finally hits Los Angeles.