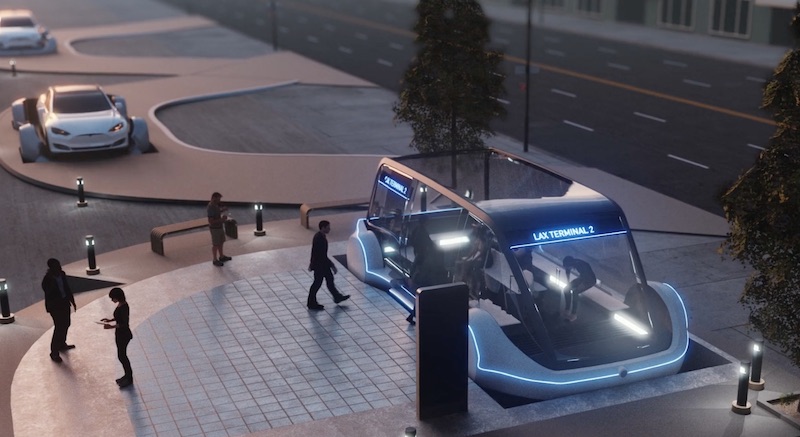 An animation of the proposed transit system Photo: The Boring Company

Elon Musk recently announced that the Boring Company‘s tunnel transit system will now be focused on moving pedestrians, not cars, Wired reports. Musk let out word of the change via Twitter this past Friday.

Boring Co urban loop system would have 1000’s of small stations the size of a single parking space that take you very close to your destination & blend seamlessly into the fabric of a city, rather than a small number of big stations like a subway

He also tweeted out the following video, illustrating roughly what all of this would look like. The video shows a handful of passengers getting into “pod” at street level. The pod then sinks below the ground and joins others on a track.

Better video coming soon, but it would look a bit like this: pic.twitter.com/C0iJPi8b4U

This video is quite similar to a previous animation, in which a single, bright red personal car pulled onto a platform at street level and was similarly moved through the tunnel system on an electric skate at a projected speed of over 100 mph. This vision received criticism from various transit activists and experts, particularly those wondering why the system carried individual cars and not people.

Musk initially announced the project via another tweet, this one back in December 2016. He wrote, “Traffic is driving me nuts. Am going to build a tunnel boring machine and just start digging…” At the time, it was unclear if he was serious—being that he’s one of the few frustrated commuters that possessed the means to do just that—or not. Musk, true to tweet, bought the machines and started digging near the SpaceX headquarters in Hawthorne.

In January, Musk proposed a 6.5 mile “proof-of-process tunnel” to the Culver City Council, which he said would come at no cost to taxpayers. The Council has yet to vote on this proposal.

In the meantime, you can watch this video Musk’s pal Jonathan Nolan, co-creator of Westworld, made about the SpaceX Heavy Falcon rocket, set to David Bowie’s “Starman.” According to The Verge, Musk stopped by the robot show’s SXSW panel on Saturday where they played the video at the end of the event.