A Brief Explanation of the Richter Scale and Earthquake Impact 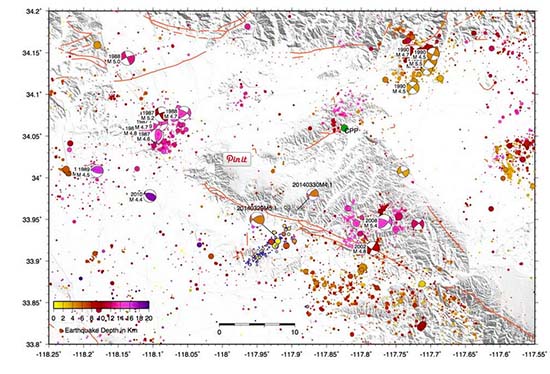 We see / hear these terms on television news programs and on Twitter feeds, but how many of us actually know their exact meaning? (for example, see above an image mapping of aftershocks for the recent La Habra earthquake)

Well, allow me to make a very brief, very simple explanation so we can all get on the same page regarding earthquake magnitude measurements. This way, at the least, we can all panic equally when the big one actually arrives.

Now, the scale that we’re all familiar with was invented by a seismologist name Charles F. Richter in 1934. The Richter magnitude is calculated from the amplitude of the largest seismic wave recorded for the earthquake, no matter what type of wave was the strongest. It is a base-10 logarithmic scale.

The numbers below offer a simple breakdown of what each level means in terms of real world impact, along with a general estimation of annual occurrences:

Usually not felt, but can be recorded by seismograph. 900,000 occur per year (Worldwide).

Often felt, but only causes minor damage. 30,000 occur per year.

Slight damage to buildings and other structures. 500 occur per year.

May cause a lot of damage in very populated areas. 100 occur per year.

Great earthquake. Can totally destroy communities near the epicenter. One every 5 to 10 years.

Unfortunately, despite the accuracy in measuring earthquakes that have happened, scientists still can’t make solid predictions of future earthquakes down to the day or even month. All we can do is identify fault line patterns that would indicate areas would be likely to be hit by earthquakes within the next few… decades.

According to the Uniform California Earthquake Rupture Forecast there is 67% that Los Angeles will be hit by a 6.7 or larger magnitude earthquake in the next thirty years. As a point of reference, the famous 1994 Northridge quake was also calculated as a 6.7, with two separate 6.0 aftershocks occurring on top of the initial quake. All told, 5,000 folks were injured, and 57 lost their lives.

Still… a 30 year window? Damn that’s a lot of wiggle room. But given that they’re laying the odds at two times in three, you might want to get your earthquake preparedness kit on the ready, just in case quakey mc-quakerson comes knocking on your door sooner than you think.

Never can be too careful!