In anticipation to the opening, Blue Star will be having a preview TODAY (Monday, October 19) starting at 8:00am offering guests and locals who visit the shop a free donut until they run out.

The preview will include some classic flavors that have made the haute donut shop famous in Portland along with new LA-specific items inspired by its new SoCal home. LA flavors include a Piña Colada donut made with pineapple, coconut, rum and a mint-flavored cake donut topped with shredded coconut and a brunch inspired Greek Yogurt Honey Granola donut, topped with housemade granola. 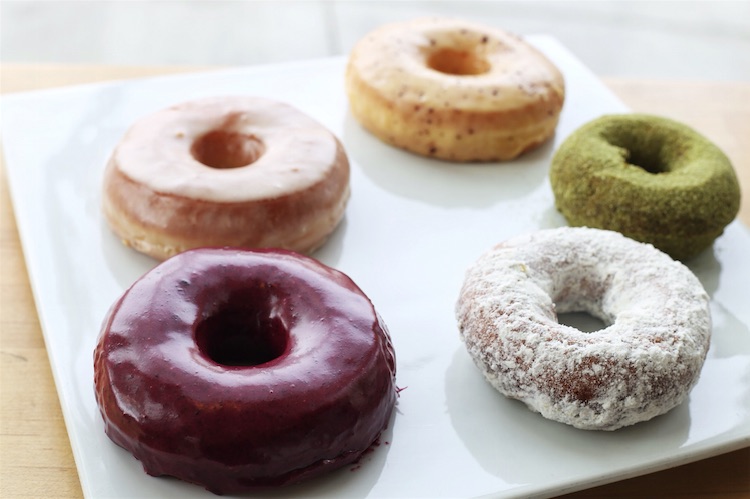 Once Blue Star is officially open to the public on Wednesday, October 21, guests can expect a full line-up of thoughtfully-crafted flavors that run the gamut from Portland-bred classics like the Blueberry Bourbon Basil, Hard Apple Cider Fritter and the O.G. (Orxata Glaze) featuring Blue Star’s original recipe for horchata; to brand new Los Angeles treats like the aforementioned flavors. Down the line, guests can expect additional LA-specific flavors to appear. Did someone say… Mimosa? Yup it’s happening.

Blue Star donuts are made up of a brioche-style dough that takes 18-hour to make, setting them way wayyyy apart from your local donut joint. The ingredients sourced for the dough include sustainable bread flour, European-style butter, whole milk and cage-free eggs from local purveyors.

The donuts are fried in rice oil at a lower temperature to minimize the absorption of oil into the delicate pastry, before receiving their baptismal glazes and lavish fillings – each concocted with whole, real ingredients like fresh fruit, vanilla beans, French dark chocolate, and powdered sugar.

“When we started Blue Star, the goal was to do things differently,” says Micah Camden, who spearheads the culinary direction. “We wanted to offer a donut that stands out because of the quality and complexity of the ingredients, and doesn’t kill your palate with sweetness.”

The shop will also offer Stumptown Roasters coffee and cold brew. All items will be available for to-go only from 8:00am until 10:00pm (or until supplies last), daily. For more information visit www.bluestardonuts.com.