As I mentioned yesterday, it’s going to be really, really cold in Los Angeles this week (at least by our standards).

With an extremely cold storm set to hit us around Tuesday afternoon, health officials issued a winter weather warning for Southern California mountains and the surrounding valleys. 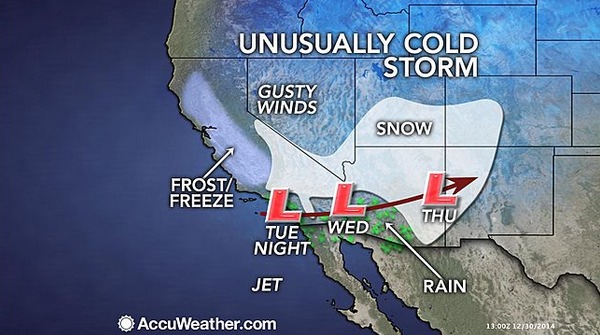 “Children, the elderly and people with disabilities or special medical needs are especially vulnerable during such cold snaps. Extra precaution should be taken to ensure they don’t get too cold when they are outside.There are places where people can go to stay warm, such as shelters or other public facilities. We also want to remind people not to use stoves, barbecues or ovens to heat their homes due to the risk of carbon monoxide poisoning.” 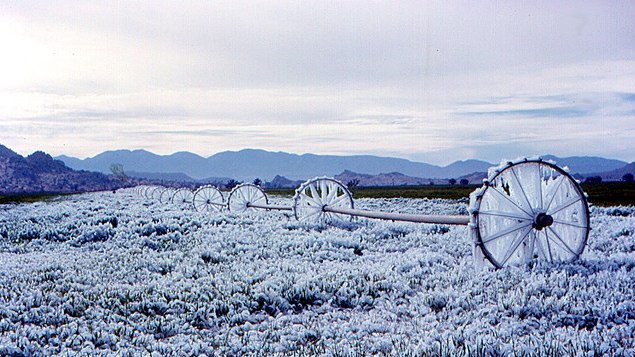 A rare photo of snow covered fields in the Antelope Valley from Dec. 30, 1962. Credit: Roger via flickr

The National Weather Service has advised folks camping out on Colorado Boulevard for the Rose Parade to wear extra layers of clothing as temps will easily hit the mid 30’s. The Antelope Valley and adjacent mountain region could see temps even lower, perhaps even touching the single digits or low-teens.

Additionally, the Los Angeles County Public Works ordered several areas of the Angeles National Forest to be closed starting 10am Tuesday. Access will be restored upon a proper safety inspection of the areas after the storm passes. Snow levels are expected to drop to an elevation of as low as 2,000 ft.

Bottom line, stay warm and stay safe out there, people!