The ‘Hot Tub Cinema Club’ Series is Coming to L.A. 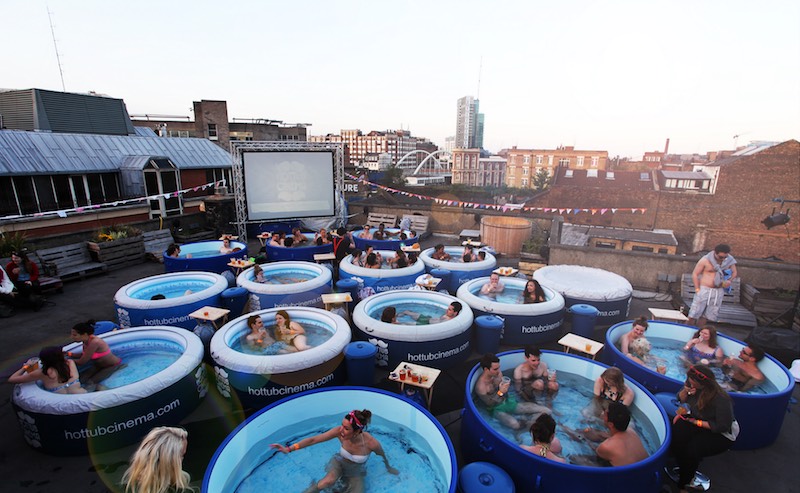 Movies. Friends. Hot tubs. If that sounds like an intriguing trio then you might fancy something called Hot Tub Cinema Club, an international movie screening series set to debut in Los Angeles later this year.

Hot Tub Cinema Club has been putting on events in Europe and Australia over the past two years. The premise is pretty much exactly what it sounds like: Small groups gather in inflatable hot tubs to hang out on warm days/evenings and watch cult classic films, with a bit of drink and grub thrown in for good measure.

According to a release, HTCC’s L.A. debut will feature six screenings which will be limited to 20 tubs per screening with up to five people per tub. That’s 100 people per engagement. We Like L.A. spoke with a rep from Hot Tub Cinema Club via email who was to fill us in on some additional details. Here are few key need-to-knows:

If the $40 ticket point sounds pricey, that’s probably because it’s more than double the cost of what two of L.A.’s more popular screening series have announced for 2018. Street Food Cinema and Rooftop Cinema Club both range in somewhere in the low to high teens per ticket on average, depending on the package you purchase. Then again, those series don’t include hot tubs, so we’ll let you be the judge of whether you think it’s worth it.

Hot Tub Cinema Club is targeting late September for its Los Angeles debut, but no official date has been confirmed as yet. The location will be somewhere in Downtown Los Angeles, but again, no venue has been confirmed. For now, interested guests can sign up to stay apprised of pre-release tickets at hottubcinemaclub.com.