YOU ARE A CAR: An Infographic every L.A. Cyclist (& Driver!) Should Read 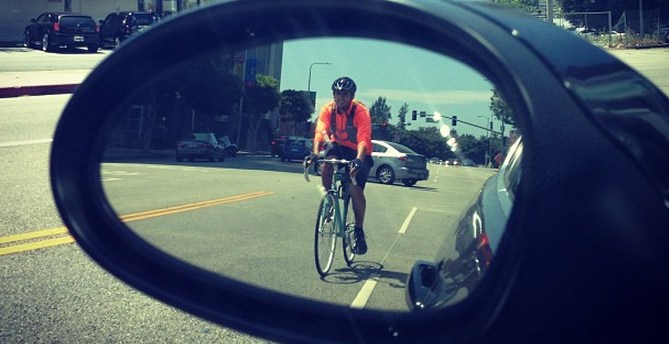 According to stats compiled by Ted Rogers, the blogger behind bikinginla.com, the number of cycling related deaths in Los Angeles in 2013 jumped to a whopping 18 after a yearly average of 4 to 5 in previous couple of years (source: L.A. Times).

With the city continuing major initiatives to increase the amount of road space allocated to cyclists (just look at what’s going on in DTLA) it seems like more and more us drivers will be sharing our space, and need to be aware of our fellow citizens pedaling on two wheels. In the same token, the folks on bikes need to understand what their role is in keeping the roads safe.

That’s why I’m thankful that Reddit user CAPTAINLOCKS took the time to create a very simple, but very powerful infographic showing basic do’s and don’ts for cyclists who are navigating L.A. roads.

As the title suggests, the author’s main thesis is if you are cyclist on the road with automobiles, you need to treat yourself as a car, following the same laws as they do (and hopefully the cars out there will reciprocate and allow you to do that safely).

Doing things like keeping your lights on at night, stopping at all marked stop signs, and not riding on the curb seem like they might be fundamentally easy, yet not everyone always complies.

At the end of the day the best way to minimize risk whether you’re driving in your car or a as cyclist trying to share the streets is to follow the rules of the roadways predictably. Knowing what to expect really is half the battle.

Be safe out there!