This Infographic Shows the Origin of L.A. Neighborhood Names 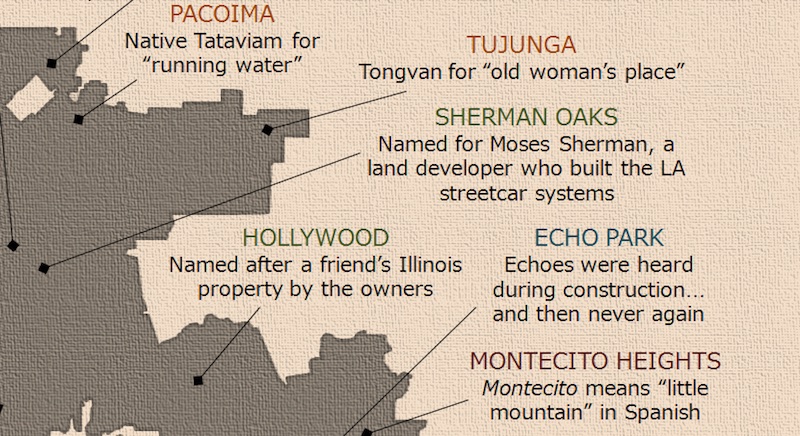 An infographic titled Los Angeles’ Hidden Etymologies dives into the origins of various Los Angeles neighborhood names. The infographic was created by Adam Aleksic, a high school junior in upstate New York, who is a self-admitted etymology nerd—in fact, that’s name of his blog, Instagram, and YouTube channel, where he frequently posts about word origins.

“I first encountered etymology in a Cambridge, U.K. bookstore in March 2016, when I read Mark Forsyth’s The Etymologicon. An entertaining read linking some of the most interesting etymologies out there, it drew me into the field, after which I began delving into more and more advanced material,” Aleksic wrote in an email to We Like L.A. “There’s just something intrinsically fascinating about etymology, the perfect bridge between history and language, two previous interests of mine.”

In November of that same year, Aleksic started his Etymology Nerd blog. He’s since completed over 500 blog posts, 13 videos, and 37 infographics. One of his favorite pieces is on geographic tautologies. A tautology is when the same thing is said twice, like when people say “ATM machine,” even though ATM stands for automated teller machine. In Aleksic’s infographic, he notes where a place has been named in a similarly repetitive fashion. For instance, “Sahara” is an Arabic word for desert, so the Sahara Desert is redundant.

Aleksic got the idea to do geographic locations after wondering about the origin of the Manhattan neighborhood, Hell’s Kitchen. (Find the Manhattan infographic here.) Aleksic noted that as an East Coaster, he’d only heard of a few L.A. neighborhoods, like Hollywood and Watts, but now knows quite a few. Leaving out neighborhoods with obvious origins, like Chinatown, Aleksic examined 35 names, spanning from East L.A. to the coast, and from the Valley to the Port of Los Angeles. He found himself surprised by how many Los Angeles area neighborhoods are named after real estate developers.

“Of the 35 neighborhoods I looked at, seven were named after people with connections in the real estate business,” he said.

Other names are a little more fun. Tujunga was named by the Tongva, who settled in the area many years ago. While the direct translation is “old woman’s place,” Los Angeles Magazine notes that what it really means is closer to “earth mother.”

Tarzana is named for the character Tarzan. According to writer Hadley Meares, Tarzan author Edgar Rice Burroughs bought the estate of Los Angeles Times publisher Harrison Gray Otis in 1919. It was called Mil Flores (Spanish for “thousand flowers”) as the time of sale, but Burroughs renamed it Tarzana. Burroughs later divided some of the property into subdivisions, which did not sell as well as he expected. He eventually sold the estate to a development company, and residents ultimately adopted Tarzana as their official name.

What’s Aleksic’s absolute favorite word? “Sophomore,” which is Greek for “wise fool.” As in, you’re not as green as a freshman, but you’ve still got a lot to learn. He also enjoys “mortgage” which, as you may have already gleaned, is French for “death pledge.”

Next up, Aleksic plans to look into neighborhoods in Chicago and New Orleans before moving to science-related etymology projects. Despite his passion, he’s not planning on going into a linguistic field, but law.